The Stein & Brown (or Browne: both spellings are used) distillery at Thomondgate in Limerick was in business by 1809. It was a significant operation: in 1822 it distilled 231790 gallons of spirits, which was about one twentieth of total Irish production, and in 1827 about one sixteenth. There were far more distilleries in Ireland at that time than there are now.

I have little information about the Steins, but John Browne gave evidence to several parliamentary committees during the 1820s and 1830s: we learn that he was a Scot, a Protestant, but a supporter of Catholic Emancipation. He had a share in a distillery in Clonmel, which may have been Andrew Stein’s Marlfield distillery. In 1837, he responded thus to questions from the Select Committee on the State of the Poor in Ireland:

Have you employed a great number of persons as labourers in agricultural works, or in procuring fuel and turf? We have, at a bog near Castle Connel.

What is the rate of wages which you have paid to those agricultural labourers? The rate we used to pay was 10d Irish; on the change of currency we paid 9.5d British.

Were those wages also paid in money? Yes, in money.

You were the proprietor of a farm in the neighbourhood of Limerick? We had three farms, but we gave up one of them.

The bog was at Portcrusha, on the River Shannon side of the road (R525) between Castleconnell and Montpelier (which is on the Limerick end of the bridge at O’Briensbridge). The house on the site was, and is, called Mona Lodge. 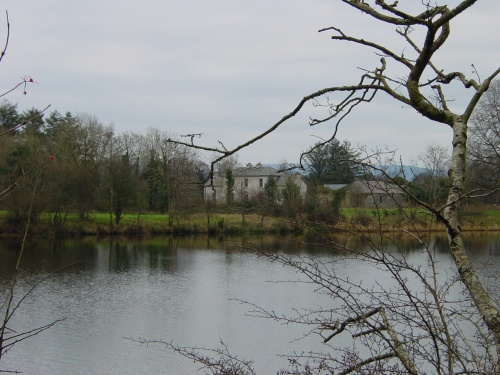 Mona Lodge from the far side of the Shannon

The distillery installed what was probably Limerick’s first steam engine in 1822. We don’t know when they bought the bog, but Paul Duffy shows that the steam engines must have been running on turf by 1830 at the latest, and possibly from as early as 1822. Samuel Lewis said that Limerick received turf from Castleconnell “particularly for its large distillery”.

Brown’s Quay and Thomond Weir. The distillery was just where they meet

It seems that Brown retired from the distillery, or died, some time between 1840 and 1846: during the Famine, the firm’s principals were two Steins and a Walnutt. Walnutt was charged with having substituted inferior corn of his own for the firm’s corn when supplying the Relief Committee of Broadford and O’Callaghans Mills. By 1850 the Griffiths Valuation had two entries for Stein Brothers & Co and one for James Stein but no sign of Brown. 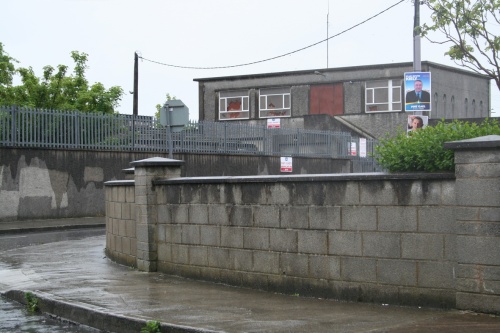 The site of the distillery

The other evidence is that, on 20 September 1841, the lease on the bog passed to James Macnab. He was one of three Scottish brothers who came to Ireland; two of them, including James, had worked with their father at a Stein-owned distillery in Alloa, and they came to work at the Limerick Distillery. John soon emigrated to Canada, but James was put in charge of the bog, perhaps in 1823. He died in 1865 and his son Alexander Allen Macnab took over. He achieved national recognition, as an authority on the preparation of turf as fuel, in the 1870s but emigrated to the USA in 1885. The property was sold in 1897.

Looking over the drained bog from the road

The Ordnance Survey map of 1840 shows a canal leading into the bog, with two branches; the 1893-99 map shows a more extensive system of channels, which served both to drain the land and to transport the turf. The Griffiths Valuation map, available free online, matches the 1840 OS map; you can see it here. (If necessary, search for either Portcrusha or Mona Lodge in Limerick, and zoom in step by step.) There is no sign of the wooden bridge shown on Griffith and 1840 OS. 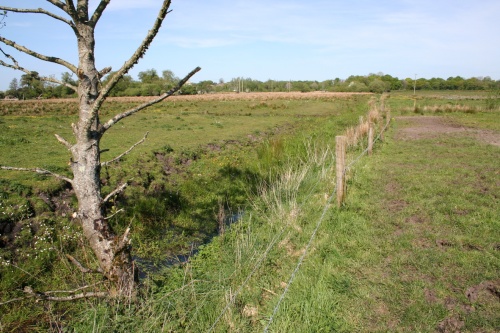 The main stem of the canal looking east, away from the Shannon 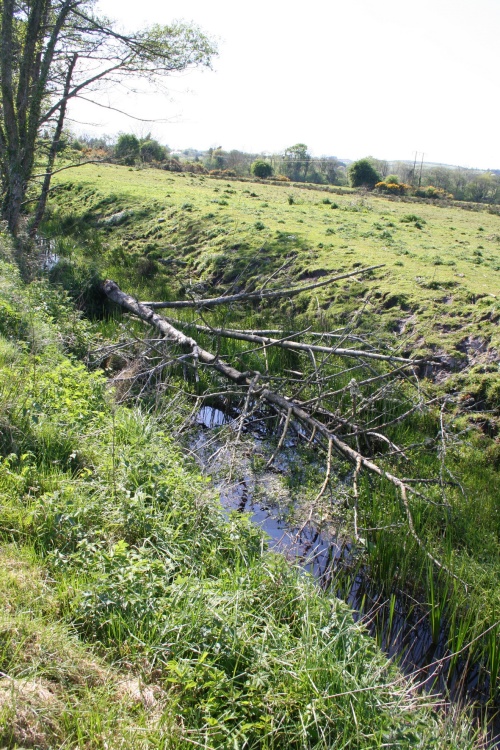 We know something about the early years of James Macnab’s management of the bog. Mr J McC Meadows ME, a member of the Irish Peat Fuel Committee, wrote four papers about systems for cutting and preparing turf for fuel. Writing about it in the Irish Times in 1873, he cited the Macnab operation:

There the cutting and saving of turf as a marketable commodity has been followed for many years. Fifty years ago this land had more the character of a morass than of a firm bog, but this circumstance did not discourage enterprise. A substantial pier for boats was built; from the Shannon a canal was cut into the morass, with branches for drainage and transport. Some three hundred persons were soon employed every season in the cutting and saving of turf.

In 1842 the property passed into the hands of Mr James Macnab, who from the first conducted its management, and from that time to the present the raising of turf for sale to the public, coupled with the reclamation of the bog, has been followed as a “special business”. The cutting commences in March, and is continued until August; and five thousand tons are made and sold annually.

Mr A A Macnab, the present proprietor, states that wet weather does not prevent the safe harvesting of the turf, and during the dripping summer and autumn of 1872 he cut and saved in good condition five thousand tons, all of which was disposed of to the public a month or two before the end of the year. The present state of this tract of country, which, within the memory of many now living, was a waste, is instructive and encouraging. About fifty statute acres of the cut-away bog have been reclaimed into excellent pasturage for cattle, producing an annual rental of £85, and forty other statute acres are in progress of reclamation. About Mona Lodge are about eighty acres under grass and tillage, with fences interspersed with shrubs and hedgerow trees. Last year the turf was sold at 6s 6d per ton, and this included the proprietor’s profit and return from the work. There has since been an increase of 2s per ton, but altogether it is not a serious item when we consider the still seriously high price of coal.

Some of the stonework

The canal at the quay. The river level is much lower than it was and the land was lowered too as the bog was drained

Local information says that there was a lock gate at the entrance to the bog canal. It joins the Shannon just upstream of, but on the opposite side of the river from, the upstream end of the Errina–Plassey Canal, which would have made carriage by water to Limerick very easy.

The junction with the river

Looking downstream towards the Plassey–Errina Canal. Starting at the right, there is a solid block of trees and leaves. To the left of that, near the middle of the photo, is a lone tree with few leaves; it’s at the entrance to the canal

We don’t know whether the turf went from the canal harbour to the distillery by road or by water: turf was sold from the left (going downstream) side of the harbour, opposite the Lock Mills, and the distillery’s turf could conceivably have been discharged there to be carted to the distillery.

Canal harbour, Limerick, looking upstream. The gate to the Lock Mills survives in front of the flats on the left. The area on the right (which would have been left coming downstream) has been much tidied up recently

Alternatively, the crew could have worked the boat up the Abbey River and then down the main stream to Brown’s Quay at the distillery, just above Thomond Bridge, or even waited for full tide and worked the boat downstream past Merchants Quay then upstream over the Curragour Falls.

The Curragour Falls at high tide. The distillery was upstream of Thomond Bridge, on the left. The yellow buoy (foreground) marks the modern weir

The “Return relating to trade boats” in Appendix B No 6 of the Second Report from the Railway Commissioners in 1838 lists turf boats belonging to the Limerick Distillery as one of the four main types of boats using the Limerick Navigation (Limerick to Killaloe). We have no information about the types of boats in use or their methods of propulsion, although there is some information about the boats in general use on the navigation. It is unlikely that they carried more than 16 tons, and they may have been rather smaller, perhaps carrying only 5–10 tons.

A somewhat larger Shannon boat from The Graphic 1879

A painting in the Limerick City Gallery, and displayed on their new website, may help. The two boats in the foreground (bottom right) seem to be turf boats, one empty and the other full, being propelled by men with poles. They are off Brown’s Quay, above Thomond Bridge and with the distillery out of shot (as it were) to the right. There is little sign of a current: that might be because the mills and their dam at Curragour kept the water upstream looking like a millpond (at least at appropriate states of the tide).

It seems that the distillery may have ceased using turf, perhaps after Brown departed, and that Macnab then began selling turf to the public. A A Macnab wrote about the advantages of water transport, so it is possible that he continued to send the turf by water into Limerick. He wrote too about the necessity for puddling and drying the turf properly, producing what he called “stone turf” of high quality.

I have a longer, footnoted version of this text containing the information I have been able to gather about the Stein Brown distillery on the one hand and the Macnab bog operation on the other. I would like to learn more about the histories of those enterprises; if you know anything about them, and would be interested in exchanging notes, please contact me by leaving a Comment below.