The Mystery of the Sunken Barge

Can you help to solve a mystery?

Cory Griffin of New York, USA, is trying to find out more about an ancestor, Simon Murphy. She has two newspaper extracts, from 1874 and 1875, in which he is mentioned; they concern an accident, in December 1873, involving his canal boat at Spencer Dock on the Royal Canal.

The newspaper accounts are incomplete, in that they don’t tell the full story of what happened, but they provide some fascinating hints about Royal Canal operations in a period about which we know little. As far as I can tell, there are no Royal Canal archives for 1850 onwards, or at least they are not cited by either Peter Clarke or Ruth Delany, the authors of the two histories of the canal. So there is a period of about 100 years for which we are reliant on external sources.

Sometimes such external material supports or confirms what Clarke and Delany tell us. Sometimes, as with Mallet’s Insistent Pontoon Bridge, it supplements what the two authors say; at other times, as with Steamers on the Royal Canal, it contradicts what they say. Those, of course, are the instances I tend to record here, because they present new information.

At any rate, I think that Cory’s articles help to improve our understanding of canal operations, but not everything is clear. I reproduce the two newspaper extracts below and then comment on what I think they tell us, but I would be grateful for comments from folk who know more than I do. And if anyone has, or can find, any information from other sources, I would welcome that too.

The accident and the sheriff

The Freeman’s Journal of 25 June 1874 carried this notice.

Don’t worry if you can’t read it easily: I’ll give the important parts of the text below. Then, in April 1875, this notice appeared (with the year misprinted as 1872).

Searches for reports of events between the two dates have so far found nothing. My Learned Friend Wikipedia says:

A fieri facias, usually abbreviated fi. fa. (Latin for that you cause to be made) is a writ of execution after judgment obtained in a legal action for debt or damages. The term is used in English law for such a writ issued in the High Court. […] It is addressed to the sheriff or High Court Enforcement Officer, and commands him to make good the amount out of the goods of the person against whom judgment has been obtained.

So Mr Murphy had to pay a debt or damages to the MGWR, who owned the Royal Canal and Spencer Dock. Was the debt the legal costs he incurred by losing his case against the MGWR? Or was that case followed by a second case, perhaps because the MGWR wanted Canal Boat No 279 and its cargo of bricks cleared out of their dock?

Where are the records of the Court of Admiralty kept? And is it possible to get (easily and cheaply) a report of the outcome of the case or cases? The UK National Archives have some Court of Admiralty material, but as far as I can see even the index exists only on paper.

The nature of the accident 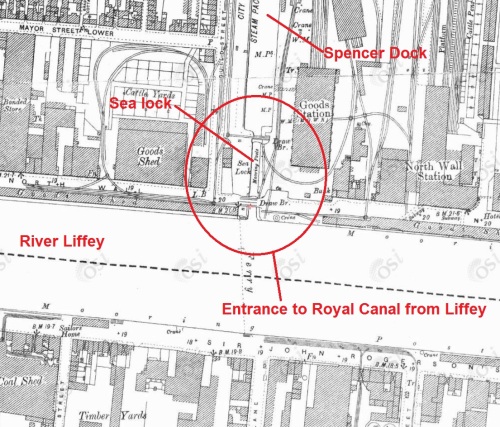 The sea lock, at the entrance to the Royal Canal and Spencer Dock from the Liffey, is narrow, despite having been expanded in 1873 to allow small coasters in. The Ordnance Survey maps online show that the lock was longer [distance between upper and lower gates] in around 1900 than it was in around 1840 and than it is now; a Freeman’s Journal report of 18 April 1873 says that the length was doubled.

I think that its narrowness is crucial to the nature of the accident. Here is the description:

On the 18th of December last the canal boat, with a cargo of bricks, was about entering the Spencer Dock, but when it had passed the cut at the entrance it was discovered that the steamer was moored there, contrary to the regulations, as alleged, receiving a cargo of flax from a Belfast boat. As there was no means of stopping the barge it drifted on, and became jammed between the side of the steamer and the dock wall. It was alleged that nothing was done by those on board the steamer to extricate the boat, and that the latter became more tightly jammed, and after some time was crushed by the steamer, and was sunk with the cargo. The railway company denied the negligence imputed, and contended that the men on board the canal boat were accountable for what had occurred by persevering to enter the dock after being warned of the presence of the steamer.

If two boats are jammed together such that they can’t move, neither of them can crush the other. But, assuming the boats were downstream of the lock’s upper gate, there was another factor at work: the tide.

There is a photograph, taken in November 1945, of two barges that got jammed between the walls in the entrance to Spencer Dock and sank in the middle when the tide went out. I suspect that, in 1874, the tide caused the boats to move in relation to one another, sinking the canal boat. If you have a better theory, do please leave a Comment.

Let us note in passing that the case confirms the evidence presented on my page about steamers on the Royal Canal: as Ernie Shepherd said, the MGWR got two steamers in 1870/1 and the steamers ordered in 1875/6 were not its first steamers.

I’m going to make some guesses. There is a large bog near Cavemount and it may be that Simon Murphy’s boat was used, in season, to haul turf [peat] to Dublin or other towns, being available for other cargoes outside the turf-haulage season. There were no motor-barges in those days, and if it had been steam-propelled [unlikely anyway] it would have been referred to as a steamer, so I suggest that it was horse-drawn and probably wooden.

This page has a drawing of the sterns of some wooden canal-boats on the Grand Canal in 1882 and this page has an account of the operation of horse-drawn boats on the Royal Canal in the mid-twentieth century; I imagine the life was largely unchanged from Simon Murphy’s time.

But this leads to another guess. Given that Simon Murphy lived by the Grand Canal, and had cargoes (at least of turf) nearby, I suggest that his boat was probably registered, and regularly trading, on the Grand rather than on the Royal. Again, I would welcome Comments.

This is important because Cory’s first question to me was about records of canal permits on the Royal Canal. As I said above, I suspect that no such records exist, although Peter Clarke [in The Royal Canal: the complete story Elo Publications, Dublin 1992] says that there were 78 boats on the Royal in 1866, one of them owned by a Murphy, and one of 31 in 1892. There is no information other than the surnames. His source is the Royal Canal evidence on the Railway and Canal Traffic Act 1888 [I’m not sure whether that was evidence given when the act was being discussed or evidence given to an enquiry established under it].

If there were evidence that Grand boats never went to the Royal, or at least to Spencer Dock, that would mean that Simon Murphy’s boat could not have been Grand-registered. But I have been doing some searching of the Freeman’s Journal and I have found that there was much more cross-Liffey (and indeed up-and-down–Liffey) traffic by canal boats, in the 1870s, than I had expected.

Furthermore, I found that at least one canal boat was equipped with sweeps (large oars), which would have enabled it to move much more easily (presumably using the tide) on the Liffey. [We knew that the Grand Canal Company had a towing steamer on the Liffey, but small firms might not have been inclined to pay for towage.]

The Grand Canal joins the Liffey on its south side, the Royal on its north

Something else that might have ruled out the “might-have-been-a-Grand boat” theory is the number. Ruth Delany, in The Grand Canal of Ireland [David & Charles, Newton Abbot 1873] says that before 1870 all Grand boats, whether owned by the Grand Canal Company or by bye-traders, were numbered in sequence as they were registered. In 1870 the numbers passed 1000 and the company therefore instituted two new series, its own new boats starting with No 1 and bye-traders’ boats starting with 1B.

I was not sure whether that meant that existing bye-traders’ boats would have been renumbered with B numbers, but For Sale ads in the Freeman’s Journal throughout the 1870s show many bye-traders’ boats with plain (non-B) numbers. Accordingly, Simon Murphy’s Canal Boat No 279 could very well have had a Grand Canal registration number. I have no information on how the Royal Canal registered boats or how the two registration systems (if there were two) were distinguished, something else for the to-be-researched list.

Again, I would welcome Comments.

To sum up on this point, then: as far as I can see, there is no reason to believe that Simon Murphy’s boat was not registered on the Grand Canal. The fact that he lived beside the Grand makes it, in my view, more likely to have been Grand than Royal. And there is one more consideration that might lend mild support to that contention.

Consider again the circumstances of the accident:

On the 18th of December last the canal boat, with a cargo of bricks, was about entering the Spencer Dock, but when it had passed the cut at the entrance it was discovered that the steamer was moored there […]. As there was no means of stopping the barge it drifted on, and became jammed between the side of the steamer and the dock wall. […] The railway company […] contended that the men on board the canal boat were accountable for what had occurred by persevering to enter the dock after being warned of the presence of the steamer.

So how did a horse-drawn boat get to the entrance of Spencer Dock? If it had been coming down the Royal towards the Liffey, it would almost certainly have been able to see the steamer in the lock or in the (equally narrow) stretch between the lock and the Liffey. Of course it may not have been horse-drawn by that stage: if the layout in 1873 was the same as that shown on the ~1900 OSI map, it is possible that a boat could not be horse-drawn from Newcomen Bridge to the sea lock because there seem to have been several obstructions in the way of either the horse or the trackline (tow rope). The boat might have been propelled by poles or sweeps or towed by a tug.

But from the descriptions we have, it seems to me to be equally possible, and perhaps more likely, that the boat was coming in from the Liffey. In that case:

I am speculating based on very little evidence, but it seems to me that this interpretation is not inconsistent with the information we have and that it might explain the canal boat crew’s ignoring the warnings about the presence of the steamer: there was probably little they could safely do about it.

If you can provide any hard information, eg about the court cases or about canal boats of that era, it would be very welcome. I would also welcome Comments about my speculations which are, I accept, based on very little evidence. The key speculative point, I suppose, is whether Simon Murphy’s canal boat had a Royal Canal number, in which case it may be impossible to find more information, or a Grand Canal number, in which case the Grand Canal Company archives may tell us more.

7 responses to “The Mystery of the Sunken Barge”