On the mainland behind Castle Island we came upon the mouth of another canal and walking up the bank beside it, discovered the ruins of a lock. These canals, we found out later, were not merely ornamental. They once combined beauty with utility by enabling turf to be brought by boat from the neighbouring bogs to a quay on the lakeside immediately below the house. Thence the turf was conveyed to the domestic quarters by means of an inclined subterranean passage beneath the terraces. I have seen private estate railways such as that belonging to the Duke of Westminster at Eaton Hall, but this was the first time I had seen a private canal system constructed for anything other than a purely ornamental purpose.

Rockingham is on the shores of Lough Key, which is connected to the upper reaches of the Shannon by the Boyle River.

Lough Key. The Shannon is to the east

There are several short canals, but that with the lock is east of the house. Of the turf canals so far [April 2012] covered on this website, that canal is the only one with a lock.

Rockingham House and canal in ~1840

Here is the canal in relation to Lough Key and to two smaller lakes (loughs). Note the harbour.

The next map shows a close-up of the lock. 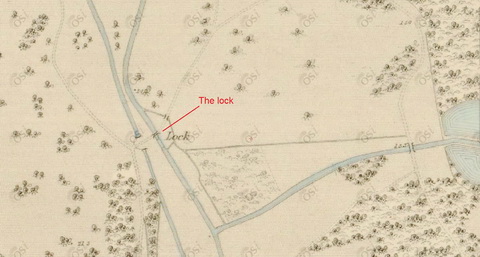 As I have not myself visited the area, I am indebted to Liam Kelly for permission to use the photographs below, taken in March 2012. He owns the copyright.

The Ordnance Survey map of ~1900 does not show the lock, which might suggest that the canal was not in use at that time.

The proximity of the harbour to what may be a group of farm buildings [they are not labelled on the OSI maps] means that the canal may have carried agricultural produce, as well as turf, out to Lough Key. 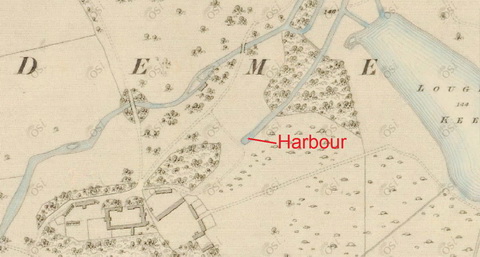 The harbour, north-east of what may be farm buildings

Again, I am indebted to Liam Kelly for permission to use his photographs. 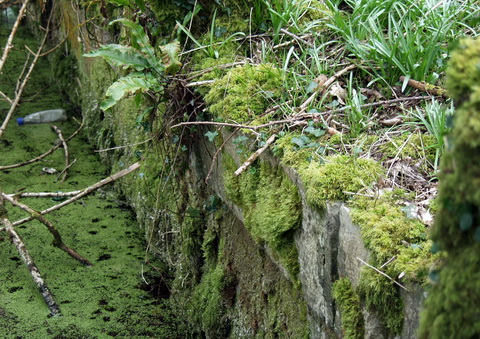 Much of the past traffic on Irish inland waterways was not recorded. What I have read about that at Rockingham lacks detail. Of what size were the boats? Who built, owned and manned them? How were they propelled? What did they carry, at what seasons, for what purpose? How did the traffic change over the years? I don’t know. If you know, do please leave a Comment.

One thing that might usefully be done is to measure the bridge, lock and harbour to work out the sizes of the boats. We may have little on paper but we have at least something in stone.