Moving a pump at Tarmonbarry

Some years ago it was proposed that a small hydroelectric plant be installed at the weir beside Tarmonbarry Lock on the River Shannon. Some preliminary work was done, but the scheme now seems to have been abandoned. Google Tarmonbarry+hydroelectric for more information.

We were at the lock when a Waterways Ireland team arrived to pump out the bunded area of the weir so that it could be checked: I don’t know the details, but I presume that WI’s concern was with the integrity of the weir. The team used a Pioner Multi that had been secured above the lock overnight.

I didn’t see the pontoon arriving, but it may have come by truck as it seems to be capable of being folded for transport. Here is the pontoon being moved to the loading station.

Moving the pontoon alongside 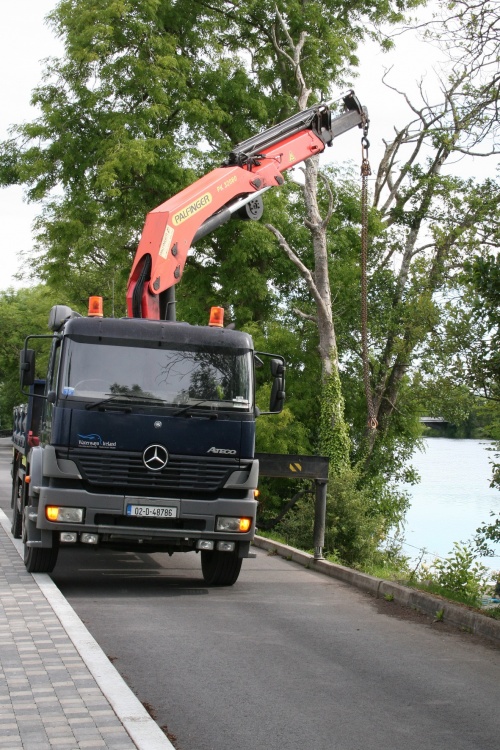 The narrow road alongside the river at this point is blocked to traffic at the upstream end, so the truck had to reverse to this position. The WI crew might have preferred to load at the jetty to which we were tied, but politely gave no hint to that effect.

The pump is loaded

The pump on board

The hoses are next

They’re stowed at the back of the pontoon …

… leaving room for a small Pioner dinghy in the middle 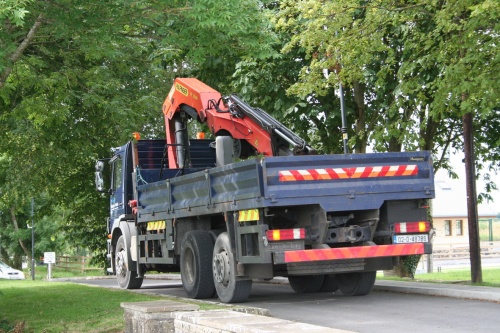 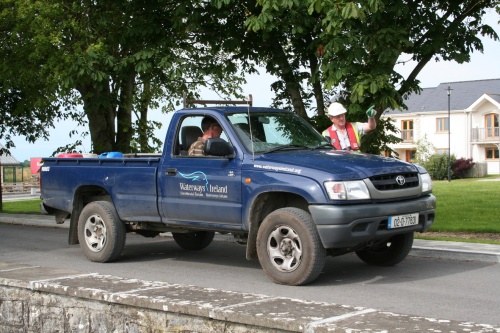 A 4WD arrives with more supplies, perhaps including fuel

The sluices have been open overnight; they have to be closed because the draw of water would make manoeuvring the pontoon very difficult.

The lockkeeper goes to close the sluices

Bitts are screwed in at the corner of the pontoon

Access to this stretch of water is controlled by the lifting bridge above and the lock below, so the WI crew can be sure that there won’t be any fast boats zooming past while they move across the river to the weir.

The Pioner and pontoon get under way. Not easy to steer!

They’re heading for a gap in the weir boom

Through the gap, they’re heading for the bund

They decide that’s not quite the right position … 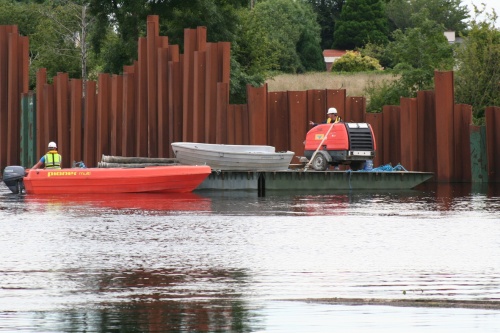 … so they pull back a bit 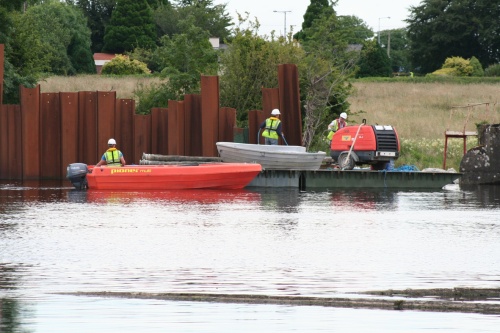 A third man has arrived via the weir walkway

The bitts and the blue rope come into use … 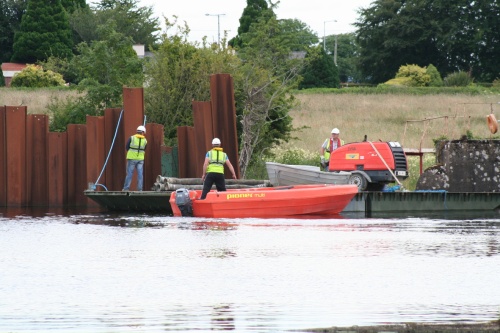 … and that’s when we had to leave

If you’re interested in the details of waterways operations like this, see the parent page Irish waterways operations. If you can correct, explain or amplify anything on this page, do please leave a Comment below. And if you would like to be notified when pages are added to this website, please subscribe to the RSS feed on the front page:  “subscribe” doesn’t mean you have to pay anything, but you will get a short notice (to your RSS reader) whenever a new page is added or when I’ve updated or amended several pages.