The Ordnance Survey maps of 1838 to 1840 show a small canal network in a bog near Roscrea. Lewis indexes it under Corbally, the parish, but modern folk could find it more easily by travelling on the N7 to Racket Hall, a hotel on the Dublin side of Roscrea: the canal carried turf from a bog to the east and south of the hotel.

Here is what Lewis had to say about it:

Corbally Co Tipperary A private canal, about four miles in length, has been constructed, from which are several branches, one for conveying turf to the distillery at Birch Grove, and another to the Rathdowney road leading to Roscrea, and partly supplying the latter town; all run into the bog of Corbally, in which is a lake about one Irish mile in circumference. A considerable portion of the bog has been reclaimed by Messrs. Birch, and is now in a high state of cultivation.

Birchgrove from a distance. The Equality Authority now has offices in the premises; the government intended to move the entire organisation to Roscrea (a form of internal exile, like sending opponents to Siberia) but it seems to maintain at least a toehold in Dublin

According to the Roscrea Heritage Society, the turf boats were hauled by donkeys.

In the grounds of Birchgrove

The Griffith’s Valuation maps are available free online; look for Birchgrove in Tipperary. It is difficult to distinguish between paths and watercourses.

The house close up

For a contemporary view, use the Ordnance Survey aerial photographs: select “Buy now” (you don’t actually have to buy anything) and go to Birchgrove, east of Roscrea, just south of the N7. If you can get the “ITM Coords” (see bottom left of the screen) to 615232, 689445 you should be just on Birchgrove itself. On the right-hand side of the screen, select “Land Registry” under “Map Products” and you’ll see all the watercourses in the area.

A building in the grounds

Although some of the land seems to have been drained since the OS map was drawn, the bog is still extensive and there are many watercourses to the east and to the south of Birchgrove. I saw some of them, but only those close to the road; they seem to be amongst the smallest and least significant, perhaps mere drains rather than canals (or combined canals and drains). I can’t say which was the private canal mentioned by Lewis; there seem to be several possible candidates.

The watercourses shown in my photos seem to be too small ever to have served as canals (although I suspect they might have been larger when draining the bog).

Still, my visit to the area did allow me to see Monaincha Abbey, a small but remarkable ruin with an atmosphere of its own: well worth a visit. You can read Roscrea historian George Cunningham’s article here. There are several Birch gravestones in it. 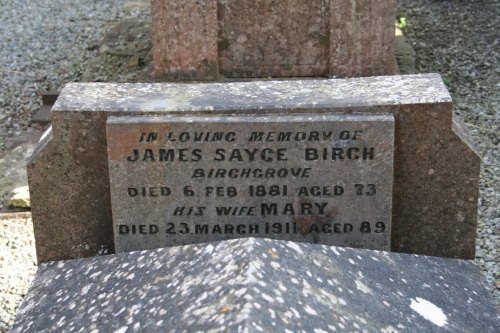 Here is what John Carr wrote about it in The Stranger in Ireland: or, a tour in the southern and western parts of that country, in the year 1805:

About two or three miles before we reached Roscrea, the singular ruins of the Abbey of Monanincha were pointed out to us: they are situated almost in the centre of the before mentioned Bog of Monela, on an island of about three acres, inaccessible by horse or carriage, and even by foot passengers, for the greater part of the year. These ruins belonged to an ancient monastery of Culdean monks, founded under the patronage of St Columbee in the seventh century, and consist of two chapels and a priory church, with the abbot’s apartments adjoining. In the island are the traces of an orchard and fish-pond. The abbey-church, I was informed, for I only saw it at a distance, is of Saxon architecture; small but elegant.

Apart from Lewis, and the Roscrea Heritage Society’s website, I have not yet found any other documentation about this navigation and I have no information on the types of vessels used, but I presume them to be inland (ie flat) cots of some kind. If you have any information or suggestions, do please leave a Comment.

The Roscrea People 2010 has a lengthy article about the Birch family, Birchgrove, the distillery and the bog and canals. You can download a PDF of the entire journal, free of charge, here. Many thanks to Eamonn Horan for the tip-off.

11 responses to “The Roscrea canals”