In Volume II of A Tour in Ireland: with General Observations on the Present State of that Kingdom. Made in the Years 1776, 1777, and 1778, and brought down to the end of 1779 (Messrs Whitestone, Sleater, Sheppard, Williams, Burnet, Wilson, Jenkin, Wogan, Vallance, White, Beatty, Byrn, And Burton, Dublin 1780), Arthur Young Esq, FRS, Honorary Member of the Societies of Dublin, York and Manchester; the Oeconomical Society of Berne; the Palatine Academy of Agriculture, at Manheim, and the Physical Society at Zurich, was scathing about most Irish inland navigations but quite complimentary about the Newry. In Volume I he had said:

Breakfasted at Newry, the Globe, another good inn. This town appears exceedingly flourishing, and is very well built; yet 40 years ago, I was told there were nothing but mud cabbins in it: this great rise has been much owing to the canal to Loch-Neagh. I crossed it twice — it is indeed a noble work. I was amazed to see ships of 150 tons and more lying in it, like barges in an English canal. Here is a confiderable trade.

In Volume II he gave the amounts spent by the navigation board on seven navigations from 1768 through 1771. The totals were:

I made some enquiries, and travelled many miles to view some of the navigations, and the only one which appeared to me really completed, is the canal from the town of Newry to the sea, on which I saw a brig of eighty or one hundred tons burthen. The same canal is extended farther than that town, but stops short of the great object for which it was begun and made, viz the Drumglass and Dungannon colleries; this may therefore be classed as incomplete relative to the object, but as Newry is a place of considerable trade, finishing it so far has merit. The great design was to furnish Dublin with Irish coals, which was probably feasible, for the seams of coals in those collieries are asserted to be of such a thickness and goodness,as proved them more than equal to the consumption of half a dozen such cities as Dublin; but two great difficulties were to be overcome: first, to make the navigation so, that all land carriage might be saved, which was properly a public work; and secondly, to work the collieries, which was properly private business, but from the utter deficiency of capital in the hands of the individuals concerned, could never have been done without public assistance.

The Drumglass collieries were south-west of Coalisland, and thus not on the line of the Coalisland Canal; Ducart’s unsuccessful canal was intended to serve them. Young seems to have thought of the navigation from Newry to the coalfields as a single navigation rather than the six we might think of today (Newry Ship Canal, Newry Canal, Lough Neagh, River Blackwater, Coalisland Canal, Ducart’s Canal).

In The Canals of the North of Ireland (David & Charles, Dawlish 1965), W A McCutcheon says that the 18.5-mile inland canal from Newry to Lough Neagh, the first summit canal in These Islands, was completed in 1742 and the first Tyrone coal reached Dublin in March of that year. It was abandoned in 1956 and, two years later, a fixed bridge on the Dublin Road severed the link between the inland and ship canals.

Link between inland and ship canals in Newry

There were some attempts in the late eighteenth century at improving the channel from Newry to the sea, but the current 3-mile Ship Canal was built between 1829 and 1850. It involved moving the sea-lock a mile and a half downstream, from Lower Fathom to Upper Fathom.

The canal links Albert Basin, in Newry, with the Victoria Lock at the seaward end. (Romantic, eh?) 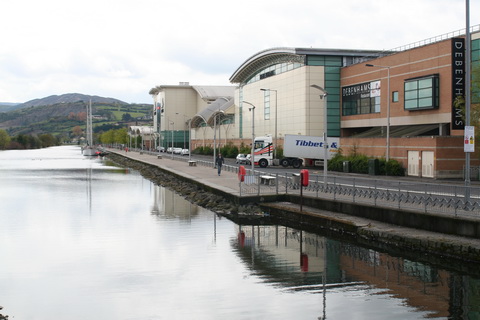 The lock can take vessels 205′ X 32′ X 13′. Sir John Rennie was in overall charge, with William Dargan overseeing much of the work. He diverted Ulster Canal traffic to the Newry Canal rather than to the Lagan Navigation.

Tony Canavan, in Frontier Town: an illustrated history of Newry (2nd ed Choice Publishing Ltd, Drogheda 2009), provides some of the later history of the ship canal. It was closed for several months in 1957 when an IRA blew up the lock gates; in 1972 an IRA unit was captured before it was able to make another attack. In between, in 1968, the MV Saint William crashed into the gates, causing a two-month closure. In 1974 the owner, the Newry Port and Harbour Trust, decided to close the port; the last ship to enter the locks was the Anna Broere on 26 March 1974.

Then, on 31 May 2007, Uncle Tom Cobley and All “officially acknowledged” (whatever that means) the automation of the lock gates and put up a large stone slab to prove it.

The Victoria Locks were modernised in 2008 and the ship canal is open as a leisure facility with some boats now being regular visitors in the Albert Basin.

The Inland Waterways Association of Ireland conducts work parties on the inland navigation, which is laudable, but wants it restored, alas, which suggests that even the Newry has succumbed to the folly of restoration.

The 1996 BBC film The Clanrye Connection has some good footage.

That is a brief survey of the background to the Newry Ship Canal, whose lock is the subject of the following pages: