In late 1848 and early 1849 Charles Colthurst of Clonmoyle appeared at several meetings that discussed reclamation work he had carried out at a holding called Milleens, between Macroom and Killarney.[1]

The timing of his appearances is odd: Colthurst had sold the land in 1846.

In 1844, he had given evidence on the subject to a commission of inquiry into the occupation of land in Ireland.[3] And he had published a short booklet (drawing on his evidence to the commission) about his reclamation work.[4]

It may be that the round of meetings was a consequence of the interest of the engineer Richard Hill CE, who said at the Coachford meeting that he had heard of the Milleens work but had not realised how large the area was: “the most complete system of bog draining and irrigation he had ever seen”.[5] Hill made a working model — a “specimen of artistic taste and engineering skill” — of the Milleens land and, on some unspecified date, read a paper about it to the Royal Dublin Society. Colthurst was the principal speaker at the Macroom and Coachford meetings; Hill and his model were present and Hill spoke in support of Colthurst. At Cork, however, neither Hill nor his model was present; Hill’s RDS paper was read by a Mr Coleby and Colthurst spoke in support.[6]

The site was described as 250 (sometimes 260) acres of bog, 12′ deep, eight miles west of Macroom on the road to Killarney and “situated in a romantic glen five hundred feet above the level of the sea”:

Two rivers, the Sullane and the Loomana, carrying the water of 10000 acres, poured in from the west into this farm, uniting at a short distance from their entrance, and then running through the land in one tortuous narrow stream, which, in time of heavy rains, flooded the land, and prevented any sort of improvement being carried out.[7]

The united river divided the site: the only crossing was a bridge on the Macroom road. Fifty acres were at a lower level than the other 200. “The model resembled a long strip of land terminating in an angle,” which suggests that the site was a long, narrow triangle.[8]

Colthurst’s booklet is available on Villanova University’s digital library and I have reproduced his map under the terms of the Creative Commons Attribution-ShareAlike licence. No changes have been made to the image. 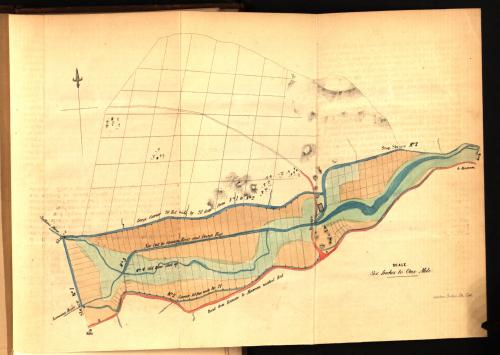 The Colthurst canals at Milleens

I think that this is the location, shown here on the OSI Historic 6″ map of around 1840: 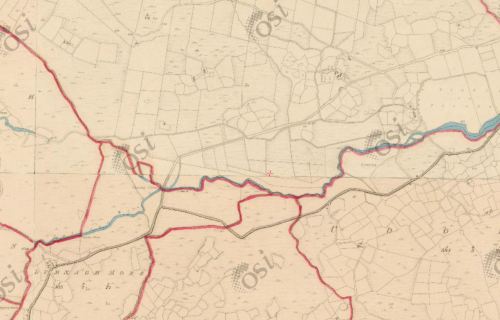 I don’t know when the 6″ map for that area was surveyed or published. The mapping may have been done while the reclamation work was in progress: some channels are partly coloured in blue. Unfortunately the Ordnance Survey Historic 25″ map of the area, from around 1900, is not working; it might have shown the canal system in more detail. You can visit the area yourself on the OSI website here; it is useful to switch between different views using the “Preview Map Series” panel.

This may show the Google map of the same area.

One oddity is that, according to Colthurst, the two rivers entering the property were the Sullane, at the north-west corner, and the Loomana, at the south-west. However, the 6″ OSI map shows the Sullane at the south-west; the river at the north-west corner is named the Bardinch (and has a tributary called the Inchamore Stream). But Google names the northern river as the Sullane and, as far as I can see, doesn’t name the southern. I cannot explain these differences.

Charles Colthurst had already had some experience of profitable reclamation with the 20-acre mill lot; he described that project to the Occupation of Land commissioners.[9] That took him five years, at the end of which he had a profit of £19 17s 2d, but he had greatly increased the value of the land: from 3s 11½d to £4 an acre.

When he gave his evidence in 1844, he said that he had begun reclamation at Milleens, two miles upriver from the mill lot, and had drained 40 acres and “relieved of water, by main cuts, about 120 acres more, preparatory to commencing next year upon a large scale”.[10]

Colthurst dug canals that had three functions: drainage, irrigation and navigation. At first he spent £64 blasting rocks from the river and giving free passage to the water, but the faster stream carried away the valuable alluvial deposits. Accordingly, he closed off the old course of the river and provided it with a new channel, 30 feet wide by 6 feet deep, a quarter of a mile long and almost perfectly level.[11] This is the “New Cut to Change River and Drain Bog” shown on Colthurst’s map, which also shows “No 4 Old River shut up”.

Carrier channels were dug around the edges of the land. The map shows the northern carrier to have been 20 feet wide by 2½ feet deep and the southern 10 feet wide but of the same depth; different figures were recorded at the meetings. The carriers intercepted water from the hills; they were linked to the main channel by cross drains 10 feet by 2½ feet; the cross drains in turn were linked by smaller drains, 1 foot by 2, at 60 foot intervals.

Sluice gates gave control over the water levels. The carriers held enough water to irrigate almost the whole of the land. The heavier, less valuable matter was held in the carriers while the lighter was carried over the land.[12] [Hely Dutton’s discussion of warping and silting may be of interest.] After irrigating the land, the carriers could be refilled in 20 hours in winter, 48 in summer.[13]

Hill said that the 150 acres drained thus far had a rich, dry, friable soil, luxuriant verdure, succulent grasses, an abundance of water under perfect control, 76 hp of water power available for a mill or manufactory, a handsome homestead and navigable canals traversing the farm from end to end in all directions. The land was now worth £2 an acre and could feed 100 dairy cows besides other stock.[14]

Closing the sluices to raise the water level ensured that the new channel, the carriers and the cross drains — all at least 10 feet wide and 2½ deep — were navigable by a small flat-bottomed boat, capable of carrying five tons. Such a boat could carry five times as much as a horse-drawn [Scotch] cart. Hill pointed out, not entirely relevantly, that a horse could draw 14 tons a day for one mile, at 2½ miles an hour, on a level road, but could draw 520 tons a day on a canal at the same speed.[16]

Further calculations were used to show that, to carry five tons on a common road, five horses, five carts, five sets of harness and five men would be needed, whereas the boat would need only one man — and it could be hauled by a bullock.

The speed of the bullock was not given, but it seems it was used to convey produce to the farm-house or homestead.[18] I am not aware of any other instance of the use of bullocks for canal towing in Ireland.

Comparing the Google satellite photos, the OSI ortho photos and Colthurst’s map, it seems that some traces of his system of waterways remain, whereas others — the northern carrier, for instance — have vanished or become much less prominent in the landscape. I would be glad to hear from anyone who can provide information about the current status of the Milleens waterways; please leave a Comment below if you can help.

[1] Each meeting was reported in several newspapers, with different numbers quoted for (eg) volumes of water; in some cases I have had to select what seems to be the most plausible number.

[4] Charles Colthurst, JP, Clonmoyle How to make money and employ the people, or a practical essay on the reclamation of the waste lands of Ireland, in connexion with irrigation Cork 1846

[11] Southern Reporter op cit. The Wexford Independent gave the depth as 8 feet, which would have been deeper than the Grand or the Royal Canal