The dry dock at Sallins

I know little or nothing about the dry dock at Sallins on the Grand Canal. I don’t know by whom it was built, when or for what purpose. I don’t know how or by whom it was operated or when or why it ceased to be used. It’s not mentioned in Ruth Delany’s The Grand Canal of Ireland [David & Charles, Newton Abbot 1973] and The Grand Canal: Architectural, Engineering and Industrial Heritage Assessment 2007 carried out by Headland Archaeology Ltd for Waterways Ireland has little to say:

Description: Stone lined entrance way into a now infilled dry dock. Set into the east bank of the canal of cut stone block construction, slightly sunken and overgrown area behind the entrance further indicates its position

Significance: Medium [Any sites that make a moderate contribution to the architectural, engineering or industrial heritage of the canal by being contemporary with its construction, operation, administration and/or applications in trade and transport but having being altered to an extent in modern times that its heritage value is reduced]

I’ve failed to find any information on tinterweb so I’m putting up this page in the hope that someone might be able to point me to an account of the dock’s history — or that someone might take on the job of researching its history.

On the map above, the dock is a blue blob with a red cross over it. It’s on the east bank of the canal as it heads south from Sallins to the junction with the Naas Branch at Soldier’s Island and to the Leinster Aqueduct over the Liffey.

As the boats of the time were horse-drawn, there must have been a towing-path on that side of the canal, perhaps just from Sallins to the dock.

Locating the dock from the far side of the canal 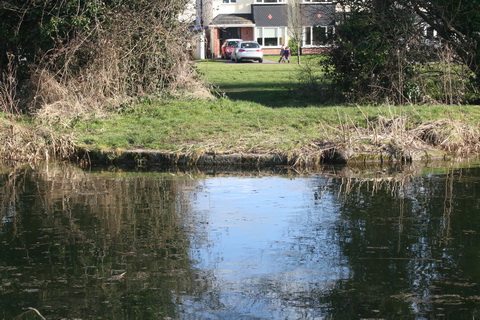 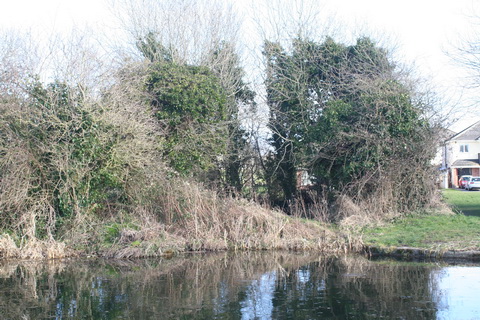 On the east side, you can drive to within a few yards of the dock and there is no barrier to access. The Google map below, if it works, will show how to get there.

You can see from the map extract below that the dock seems to have been oval rather than — like most other dry docks — straight-sided. The bank opposite the entrance is indented, perhaps to allow boats room to swing on entering or on leaving. The extract from the 6″ Ordnance Survey map does not designate the dock as such and it does not show any gates, whereas the three docks in the Grand Canal Basin at Ringsend all have gates shown. My guess is therefore that the Sallins dock was disused by the time the OSI map was drawn, but I don’t know when this sheet of the map was done.

Delany says that the canal was opened from Dublin to Sallins in 1779 and a passenger service was operating to Osberstown [south-west of Soldier’s Island) by August 1780, so this dock may have been built in that period. The Leinster Mills, at Lock 2 on the Naas Branch, were built in 1790.

It is not clear how the dock was drained, but the ~1840 map shows what might be a drainage channel running from the south side of the dock to what might be a small structure close to Soldier’s Island.

There is an inflow at about that point on the Naas Branch, but I do not know whether it corresponds to the structure shown on the map. Nor do I know where the inflow is nowadays fed from.

Furthermore, given that the canal is at the same level from the dry dock to this point, it is hard to see how this inflow could drain the dock. Perhaps, in the late eighteenth century, there was a deeper channel from the dock to some sump.

With nobody to hold the far end of the tape, it was difficult to measure the dock: I could do only a short length at a time and add the results. The totals are therefore only rough indications.

I think the length of the dock, from where the stop planks are to the rear of the chamber, is about 19.5 metres: say 64 feet.

It would be useful if two people, with long tapes and wellies, could do a full and more accurate set of measurements.

I didn’t think of measuring the full width at the centre.

Stone on the outer edge, wouthern side

Looking across the entrance

Earth and vegetation across the entrance

Possible stop-plank groove near the left side

Close-up of the circled area showing plank and metal attachment

I have no idea how old the planks with metal attachment are: they could be twentieth or twenty-first century for all I know. The ~1900 map suggests that some barrier was put across the entrance; it does not appear on the ~1840 map.

I could see no provision for conventional mitre gates. Perhaps the gate recesses are buried a little way back from the entrance — but any such gates would reduce the length of the dock available for construction or repair of boats, perhaps to as little as fifty feet. On the other hand, perhaps there were no such gates: perhaps the dock was always closed by stop planks.

The north wall of the dock

Very little of the wall is exposed

As there is little of the wall exposed, I could not say whether the entire side is stepped. 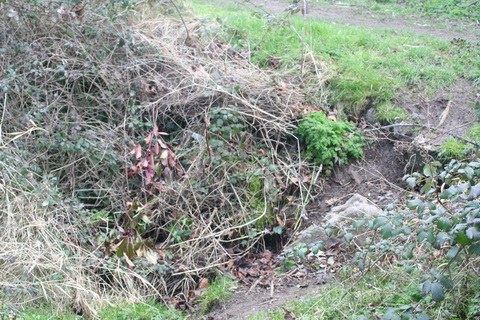 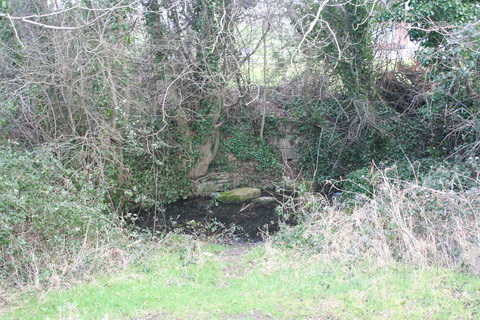 There is some water in front of the rear wall

Much more stone is exposed at the rear

It would be nice to be able to see more of the stonework and perhaps even to have some of the bottom excavated. I don’t know whether that sort of thing can be done; perhaps Kildare County Council might be interested.

Establishing the dimensions of the dock would cast light on the sizes of vessels that used the dock. Perhaps the dock was used for building rather than repairing boats; perhaps it built the boats used [as Delany shows] to carry materials used in constructing the canal itself or the boats used by the carriers.

ALLOWAY and BOAKE, No 85, Bride-Street, inform the Public, that they now carry in commodious Boats, of from thirty to forty tons burthen, heavy Goods of all kinds, between the Canal harbour in St James’s-street and Sallins, near Naas, at 2d per hundred weight, or 3s 4d per ton, which is less than one-third of the average price of land carriage for that distance.

The advantages of this Navigation to the Public, in addition to the great reduction in the price of carriage, are, that all Goods carried by the Canal are exempted by act of Parliament from all duties, rates, tolls and customs whatsoever, in all places whatsoever, save the Canal tolls, which are included in the price before mentioned; and the flour, malt, and corn premiums are the same on carriage to Dublin, by the Canal, as by land carriage.

Proper persons attend at the Canal Stores, James’s-street, Dublin, and at Sallins, to receive all Goods addressed to the care of Alloway and Boake, for the safe carriage and delivery of which, they hold themselves responsible to the public.

8 responses to “The dry dock at Sallins”