On 1 January 1848 Samuel U Roberts CE was appointed District Engineer of the Districts of Loughs Corrib, Mask and Carra in the counties of Galway and Mayo. He spent the early part of that year in “making the necessary preparations and arrangements” and began operations on navigation works in Galway on 8 March, having taken possession of some of the land required for the Eglinton Canal.

Look! No basin: the Claddagh before Roberts began work (OSI ~1840)

A large quantity of ashlar stone has been prepared for the lock and tidal basin works, in connexion with the canal, and some stanks have been formed with a view to carrying on the works as easrly as the approaching season will permit.

In the following year’s report, he said:

I don’t have a copy of the nineteenth report of the Board of Works, but in the twentieth, covering 1851 and published in 1852, Roberts said:

The lock which forms the entrance from the sea to the tidal basin has been built during the last year, the gates and sluices erected, and everything in connexion therewith perfected. The cofferdam enclosing the site of the lock has also been removed, and a great portion of the timber subsequently used as centering for the new West Bridge. The progress of that portion of the tidal basin extending from the causeway formed in connexion with the Claddagh wooden bridge up to the lock at Folan’s Lane has been a work of peculiar difficulty. The channel here is narrow, and it has been necessary to provide for the discharge of the tail-waters of three mills, in addition to which the tides which at high water percolated through the made ground on every side rendering it a matter almost of impossibility to unwater the work. The excavation of the western side of this portion of the basin has been completed, the Claddagh quay underpinned, and the quay wall between Balls Bridge and the lock at Folan’s Lane raised to the full height, and the trackway formed.

Finally, in the twenty-first report, covering 1852, Roberts was able to announce the completion of the work on the basin:

These [navigation] works, with the exception of some excavation between the Tidal Basin and Folan’s-lane Lock (which cannot be executed until the mill-works in that locality are in progress), and the dredging of a shoal at the head of the canal, were completed in September, and the navigation was opened by the late Lord Lieutenant, Lord Eglinton, on the 20th August.

Happily, his lordship did not organise a tournament to mark the occasion.

In Lough Corrib, its shores and islands: with notices of Lough Mask [McGlashan & Gill, Dublin 1867], Sir William R Wilde MD quoted a letter from Roberts giving the dimensions of the basin:

[…] the length of the Ship Canal is two-thirds of a mile; at the entrance is a tidal basin, 470 feet long, and 170 feet wide, with 1000 feet in length of quayage. The ascent from this basin to the level of the lough [Corrib] is accomplished by one lock, 130 feet long, and twenty-one wide, with a lift of fourteen feet. The depth of the navigation is six and a half feet.

Boats are allowed into the basin for the winter

The basin is managed by the Corrib Navigation Trustees

The exit from the tidal basin to the Eglinton Canal

Secure for the winter 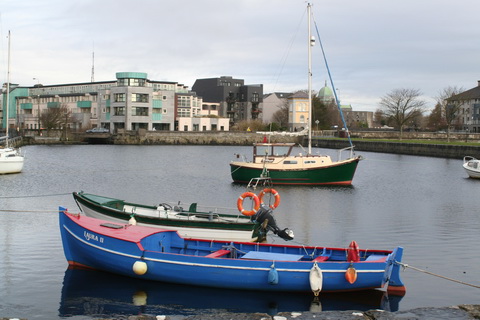 Looking across the lock

Footbridge across the lock chamber. I presume it’s lifted out of the way when boats pass through

Only the upper gates remain so the lock can be used only when the water level outside the gates matches that inside. I gather that boats are admitted in the autumn and released in the spring 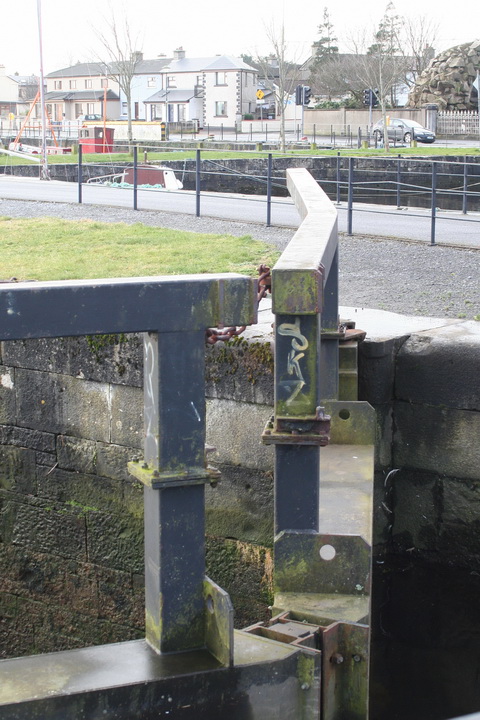 Some gate details. I presume the gates are modern

These boats may have overwintered in the lock chamber

Unsafe? I don’t know what this is

Perhaps for lifting a rack to drain the lock chamber

Made by Mallets in Dublin

I don’t know what this was (or is) for 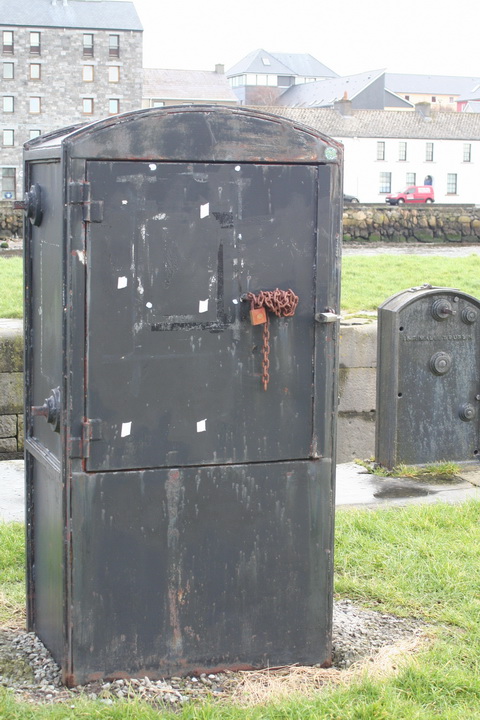 It has two spindles for winding

Collar for one of the lower gates 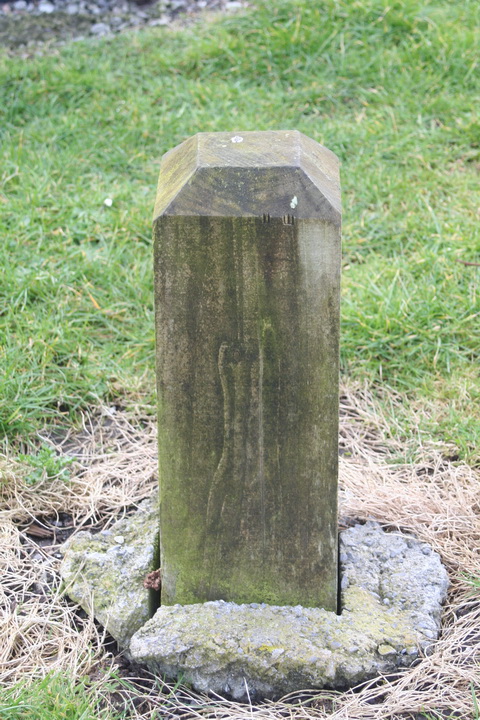 At least it’s not painted

Looking upriver: a boat tied at the Claddagh Quay and the basin beyond that

Boats looking as if they have been abandoned 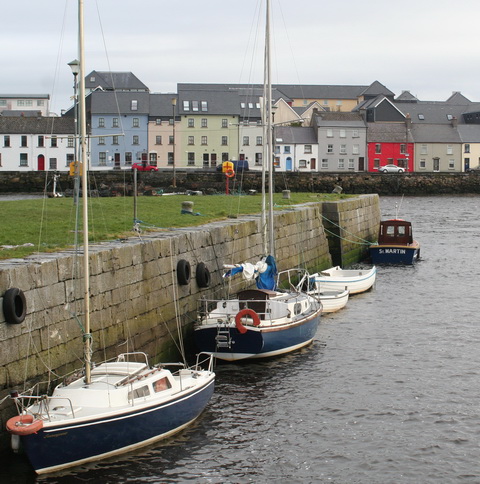 The outer wall of the basin (Ballyknow Quay) 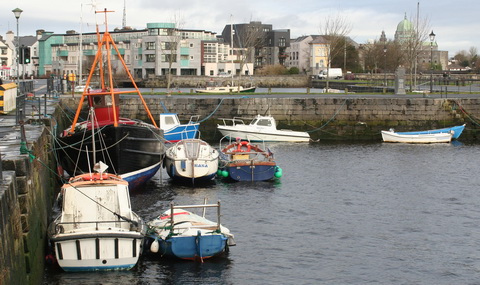 Between Ballyknow and Claddagh Quays 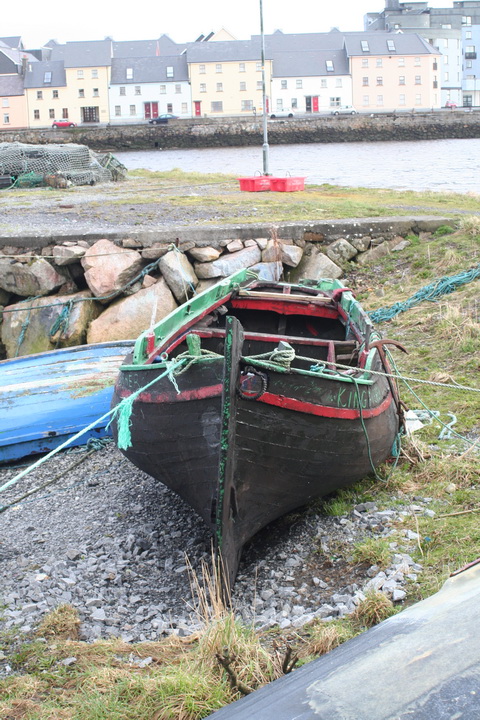 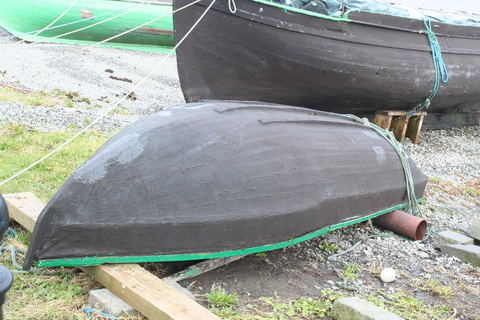 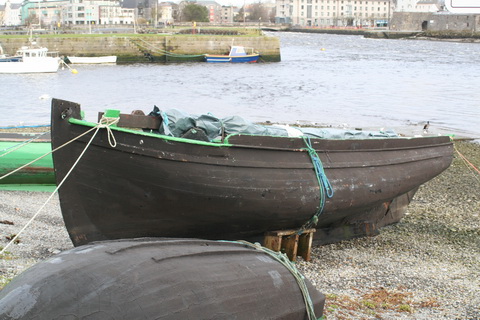 Hooker hull. Is this large enough to be a bád mór or a leathbhád? 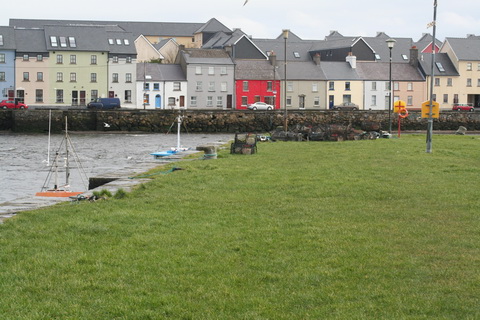 Boats on the inside of the Claddagh Quay

I would welcome corrections on anything I’ve got wrong, especially the identification of the traditional boats.