The boundaries of the Shannon

Commissioners shall cause the Limits of the River to be defined.

Section 40 required the Commissioners to survey the Shannon and certain tributaries and, if they felt like it, to produce maps or plans showing weirs, dams, water-courses “and other Matters and Things” and to give the public three weeks to inspect the maps at convenient places along the Shannon. During that period the maps could be amended; after that, the documents, signed by the Commissioners, would be evidence, accepted in any court, that the weirs, dams or other structures existed.

The maps and plans

The Commissioners did as they were told. In their third report[2] they wrote

We directed, therefore, Messrs Donnelly and Harding to execute this service, and have now to report to your Lordships the completion of this important duty.

Their survey is laid down upon and comprises 45 maps, commencing at Limerick, terminating at the head of Lough Allen, and also within one mile of the town of Boyle above Lough Key, with the necessary detailed plans of the several weirs, dams, and watercourses, which at the period of the perambulation existed: the extent of river course exhibited in each map will be seen on referring to the table in the Appendix, Schedule (F). The description of the boundary is contained in one manuscript volume, having reference to the various maps. These are now lodged in care of our Secretary, and easy reference can be made to them if required to be produced as evidence.

I have transcribed Schedule F, the list of the maps and their contents, and made it into a three-page PDF, which you can download here: The 45 maps.

I presume that the maps and plans are in Waterways Ireland’s archive; I have emailed them to check.

The Boundary of Jurisdiction

Some time ago, someone — I cannot, alas, remember who it was — gave me copies of three pages from the “one manuscript volume” containing “the description of the boundary” of the Shannon Navigation. If it was you, Gentle Reader, thank you; apologies for forgetting; I hope you don’t mind my using, below, some extracts from the copies.

The three pages are from the description of the boundaries in Limerick; I show just short extracts here.

The Shannon, as far as the inland navigation is concerned, has two lower limits: one was originally at Baal’s Bridge (and is now at Shannon Bridge, the furthest downstream on the river) and the other was, and is, at Thomond Bridge. Here is an extract from the description of the boundaries upstream of the bridge on the east side. The map extracts are from the Ordnance Survey (by kind permission) rather than from the Shannon Commissioners’ survey.

Commencing at Thomond Bridge and going upstream on the Limerick side, the boundary of jurisdiction goes along the strand at low water mark, at a short distance from the walls of a store, the walls of Munchins Graveyard and the walls of the Alms House yard, until it joins the wall on which the end of the temporary wooden bridge rested, and along by the face of that wall until it meets the embankment made between the River and the Kings Island. 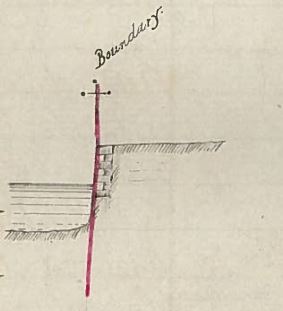 The boundary along the face of the wall

This sketch was included to show “the wall on which the end of the temporary wooden bridge rested”.

The wooden bridge was used while Thomond Bridge was being rebuilt in the late 1830s.

By the way, a note for anyone visiting the NIAH site: Thomond Bridge is not in Co Wexford).

The surveyors referred to Park Bridge as Abbey Bridge; it was replaced by Bishop O’Dwyer Bridge. Another Abbey Bridge was built, just upstream of Baal’s Bridge, in  the late 1990s.

Commencing again at the Lock Mills the Boundary is the edge of the grass outside the bank to Park or Abbey Bridge.

The edge of the grass outside the Bank

The Boundary of Jurisdiction around Sally Grove Island near Park Bridge is defined by the edge of the Island at low water.

From Park Bridge upwards the Jurisdiction is defined by the edge of the grassland outside the bank at low water, as far as the Salmon Weir which is within the Jurisdiction. 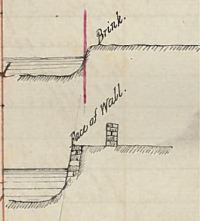 The grassy bank and the face of the wall

From the junction of the Mill Dam and Race upwards, the Jurisdiction is defined by the grassy bank of the River to the end of Mr Shannon’s rope walk, from whence it is the face of a wall built along the river to near Athlunkard Bridge […].

Note that Slater’s Commercial Directory of Ireland of 1846 lists Pierce Shannon of Corbally as a maker of ropes.

[2] The Third Report of the Commissioners for the Improvement of the Navigation of the River Shannon, Ireland; with an Appendix Ordered, by The House of Commons, to be Printed, 2 March 1842