The Cooples is the site of an ancient ford on the “Road of the Saints” between Lismore and Ardmore monasteries, it says here (page 8) and here.

I can’t locate it precisely on the map, but it is said to be around Norrisland. I’ve written in the name of the area on the map below: it appears on versions of the map at larger scales but not, alas, on this one, so I’m not sure whether the “Cas” shown below is Norrisland or the old Tourin Castle. 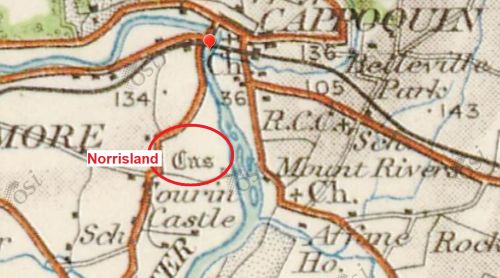 There is much information at the site

I wonder how shallow it is now

Some remains of a quay structure at the right-hand side

Next: Crotty’s Quay (which isn’t really next because I don’t know where it is). Maybe it would be better to go to Cappoquin for a blaa.