The abandoned Main Line of the Grand Canal 4

This is the last of four pages about the abandoned Main Line of the Grand Canal. Here, in case you want to visit them, are links to Page 1, Page 2 and Page 3. We’ve seen as much as we could from outside and indeed from the vantage point of the Guinness Storehouse; now it’s time to go inside.

We start with another look at the sketch map. 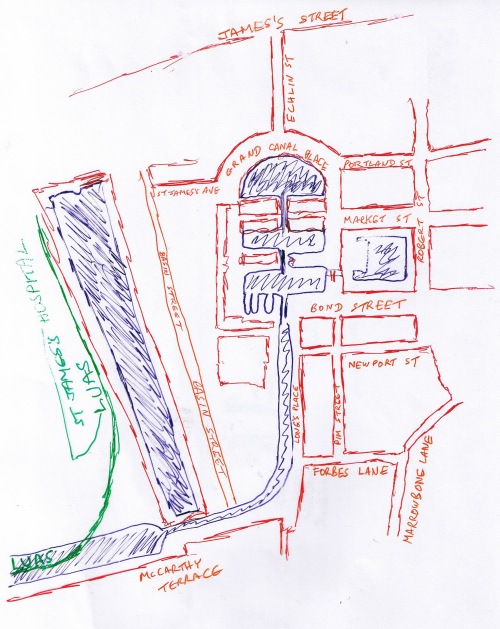 We return to the curved part of Grand Canal Place, with a look in through one of the Guinness gates …

Looking in at Guinness

… and a look back east along Grand Canal Place from the corner with Echlin Street. The curved building is out of shot to the right. 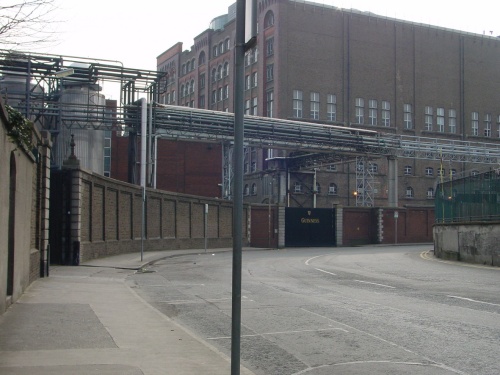 The north side of Grand Canal Place

Let’s go past the curved building … 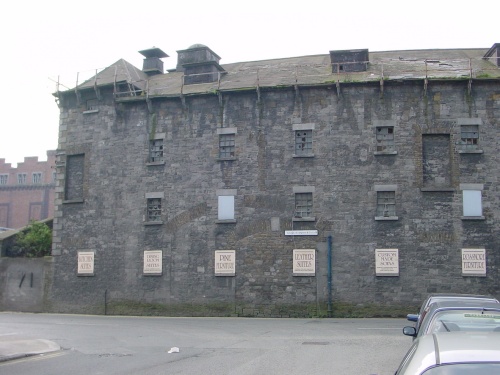 Please look after this building

… whose roof was in considerably worse condition by 2011, despite its being a protected structure …

… to the eastern end of St James’s Avenue for a moment, and look back eastward.

You can see the curved building and, beside it, a building where, on the 1830 map, Ruth Delany shows a turf bank.

The white truck marks the entrance to the Grand Canal Company premises. I sneaked in while the site (excluding the curved building) was being cleared for development.

Cobbles at the entrance

A pillar at the entrance (seen from inside)

This entrance led into the yard with various offices (and officers’ houses) on the west side, while the harbour ran down the east side. For convenience, we’ll call this the western yard. The cars are parked in a filled-in area that crosses the southern side of the old curved harbour; it provides access to a yard between the post-closure factories and warehouses. This, which we’ll call the eastern yard, did not exist when the harbour was in use.

Note that, by 2011, a steel gate and other security precautions prevented access.

Let’s start with the western yard. I don’t know why, but drilling was under way at the time. I didn’t want to be seen taking a photo …. 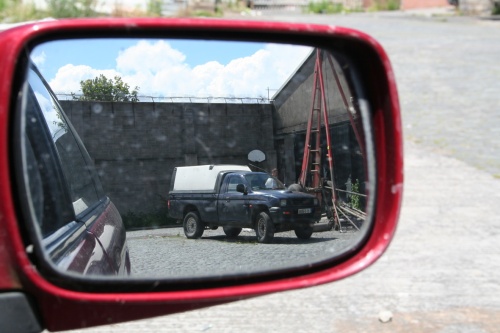 Perhaps it was the influence of Sir James Bond ….

Here’s a shot looking down the length of the western yard. I think those gates are relatively recent, with the old entrance gate a little further down.

Looking down the yard

A short update from March 2011: a locked gate now bars access to the interior.

But back to happier days, when access, if illicit, was possible ….

You may be able to see a metal track a little way in. Here’s a close-up. I presume there was a sliding gate or suchlike at this point. 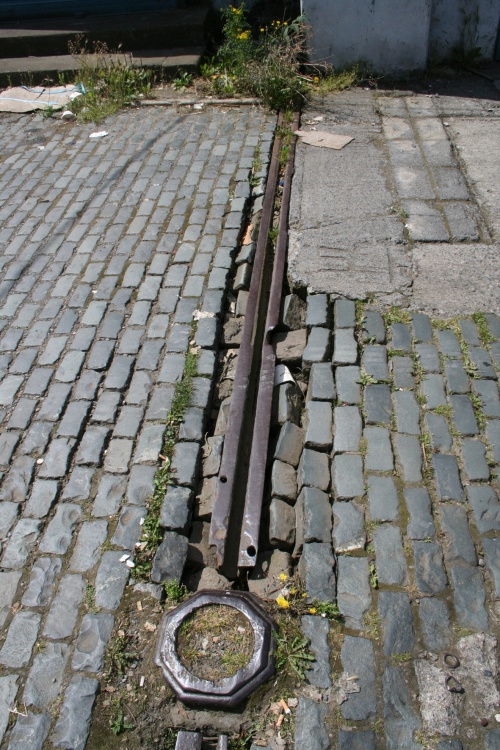 Looking out past the old entrance

This view from the inside looking out may make things clearer. The new gates are further away with, behind them, the small building where the turf stack used to be. Beyond that is the end of the curved building.

Closer at hand, the blue excrescence is obviously a newer building. Between it and the pillar is the entrance to the eastern yard, which we’ll come back to later. Then there’s the stone pillar, with the track for the (presumed) sliding gate leading up to it. To its right is one of the thin buildings that we saw from the Guinness Storehouse and that may be an original Grand Canal Company building: what Ruth Delany marked as the Ballinasloe store on the map of the harbour in 1830. Interestingly, just to the left, out of shot, is where (according to the same map) the caretaker’s house was positioned, close to the sliding gate. The shed with the canopy is recent.

Now let us go around to the eastern yard which, of course, did not exist when the harbour was in water. We’re taking our lives in our hands …. 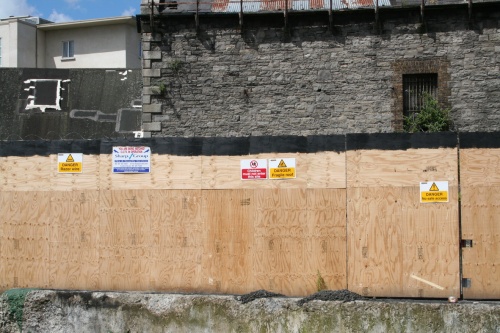 We’re now in behind the curved building, presumably swimming through the curved harbour. 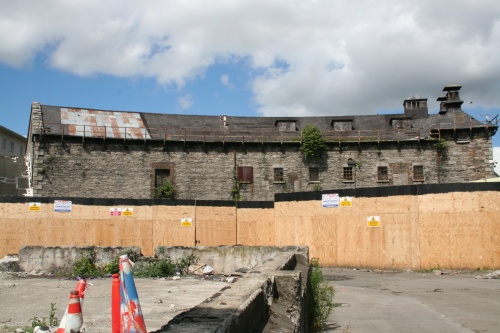 In behind the curved building

It is possible — though I don’t know — that the foundations of the demolished building on the left are in line with the quays between the two sections of the harbour. The curved building clearly needs care and attention.

Just south of the demolished building (shown in the previous photo) is the back of what I think may have been the Ballinasloe store. Here is the long side of the building, with some stonework visible. There seems to be some concrete-block patching at the corner (left side of the photo).

Looking along the side of the building

We saw one end of that building from the western yard a moment ago; the photo below shows its back. By the way, I think we are now standing in the canal cut connecting the curved harbour with the middle harbour.

The building on the right may contain some elements of the old Inwards store; here’s a view from the other direction (well, from north-west rather than south) with some stone visible. 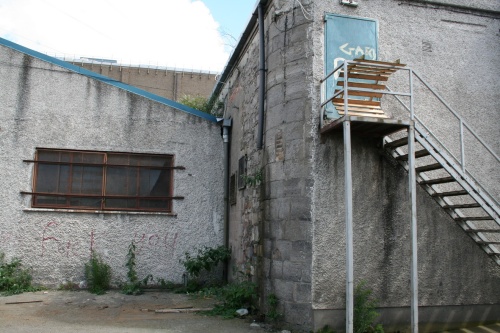 Some stone from the Inwards store?

Note the two narrow buildings on the left

I thnk that the two narrow buildings on the left, with a broad building between them, may both have been on the quay dividing the curved harbour from the middle harbour. The OS map of 1907/11 suggests that there were two thin buildings, with canopies around them.

The alternative is that the broad building is occupying the water-space of the middle harbour and that the nearer narrow building is on the quay dividing the middle from the southern harbour. However …

Looking from the southern end of the eastern yard

There seems to be no trace of any original buildings on the right of the photo.

We looked at this photo a moment ago.

Note the section of drainpipe

Here is a close-up of the wall at that point, with the stone suggesting that the right-most (narrow) building is older than the other one. 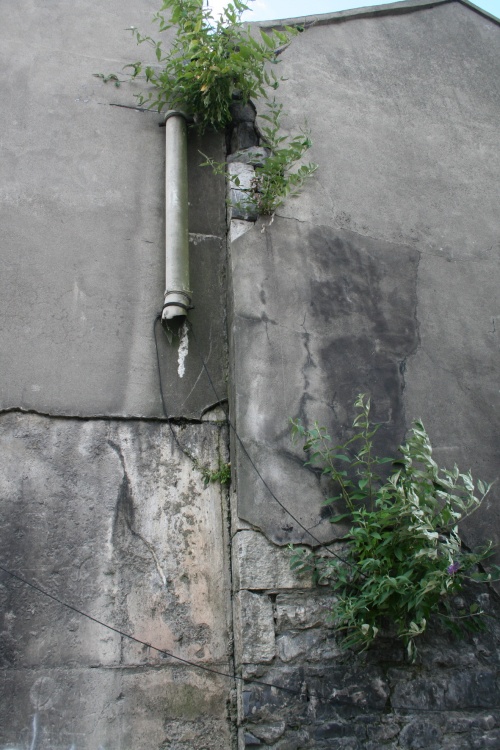 Stone to the right

Looking further along the wall, we find some stone kerbing, which may have marked the edge of the quay. 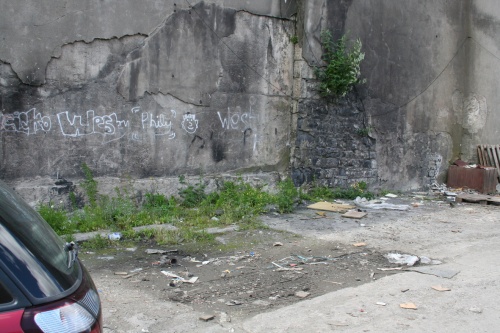 And right down the far end, near the south-western corner of the site, is the only physical evidence I found that suggested there was once a harbour here. This might have been on the wall of the Limerick store, on the quay dividing the middle from the southern harbour.

Was this ring for mooring boats or horses?

Work on the development may have paused; while access to the inside has been blocked, some firms are operating in premises in the outer section and short-term leases are being offered. I do not know what further demolition has taken place or whether any evidence of the area’s past activity still remains. The roof of the curved building has suffered further damage. 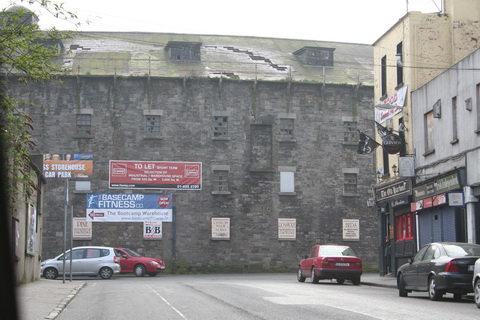 It will be clear from my account that I am not entirely clear on what was where so, as always, comments and clarifications would be welcome.

Now, if you came to this page as part of the suggested Dublin walking tour, this would be a good time to visit the Guinness Storehouse, if there are no long queues. Look out for traces of the old Guinness 1″ 10″ railway (excellent article here). Inside, look out for the model of the Guinness Liffey barge and the two engines from the Guinness railway. There is a bar too.

To see how extensive the Guinness network was, and how strategic the brewery’s positioning alongside the canal, the Liffey and a mainline rail terminus, look at the OSI ~1900 map. Switch to Historic 25″, but you’ll have to scroll to see the whole thing.

And here’s a page about Uncle Arthur’s resting-place.