The rudely constructed quay at Ballycorick

The Yeats scholar Thomas Rice Henn entitled his “sketch for an autobiography” FIVE ARCHES, after (I assume) Ballycorick Bridge, which is near his family home at Paradise.

The five arches of Ballycorick Bridge

Here is the Google satellite view, centred on the bridge.

The Google map view makes the course of Ballycorick Creek much clearer, but unfortunately it doesn’t show the main line, the part that goes under the bridge. So the best view is on the OSI maps. Zooming in, on the Historic 25″ you can see a wharf marked on the south bank of the creek, downstream (east) of the bridge. [See below for more about the wharf.]

That map names the river (above the bridge) as the Owenslieve River; Hugh Weir, in his introduction to John Bickerdyke’s Wild Sports in Ireland (original preface dated 1897; republished by Hugh Weir’s Ballinakella Press, Whitegate, Co Clare, in 2007), calls it the Ballycorick River. The Parliamentary Gazetteer of 1846 said that the area of the Owenslieve’s tideway was 2 acres, 2 roods, 16 perches. 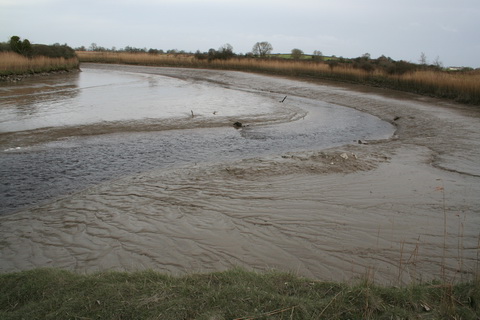 Looking down the creek from the bridge

Bickerdyke (real name Theodore Cook) wrote this about the trout in the river:

In the three miles of river below the waterfall above mentioned the brown trout run very small, but after every flood fat, well-fed silver-sided fish come up from the Shannon, and (except when on spawning intent) stay in the fresh water a few days, only so long, probably, as the extra food brought down by the flood remains unexhausted. When nothing but the scant supply common to rocky streams is left, these fish of the estuary, wise in their generation, return to their slob (mud) banks, and there continue to grow and wax fat.

To the naturalist, who commonly styles him Sammo estuarius, this fish is a most interesting variety. To the local angler, who speaks of him as a “slob trout,” he is almost as sport-giving as his first cousin of the sea.

In his Topographical Dictionary of 1837, Samuel Lewis:

CLONDAGAD, or CLONDEGAD, a parish, in the barony of ISLANDS, county of CLARE, and province of MUNSTER, 7¼ miles (S. S. W.) from Ennis; containing 4650 inhabitants. This parish is situated on the west bank of the river Fergus, and contains 16,436 statute acres, of which 4711 are good arable and pasture land, and 11,725 are improvable bog and mountain. The arable land is good, and produces excellent crops of grain, which, with butter, pork, &c, are sent to Limerick from a small rudely constructed quay at Ballycorig.

The wharf at Ballycorick Bridge

Two people (including the owner of the land) told me that, up to the 1950s, boats from Limerick came up the creek with the tide, carrying flour and meal (probably from Ranks, formerly Bannatynes). Farmers, alerted in advance, would attend with their horses and carts; they would help to get the boat unloaded quickly, so that it could get back down to the Fergus and then the Shannon; they would also carry the flour and meal to the local shop, whence it was sold. 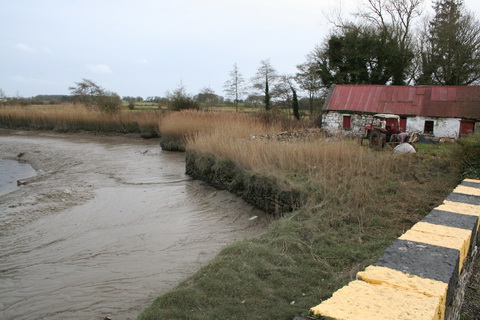 The wharf, bridge and building

That photo shows the wharf in relation to the bridge (with its yellow and black parapet). Behind it is a building that may have been a store and also, at one time, a pub. Recent spring tides have overtopped the wharf and almost reached the road.

I am indebted to Kevin Murphy (see Comments below) for the information that this wharf was built late in the nineteenth century by his great-grandfather; he points out that Samuel Lewis’s rudely constructed quay was probably further downstream, a quay that is shown on the Historic 6″ OSI map as well as on the later Historic 25″. Here is an extract from the black and white version of the 6″ map. 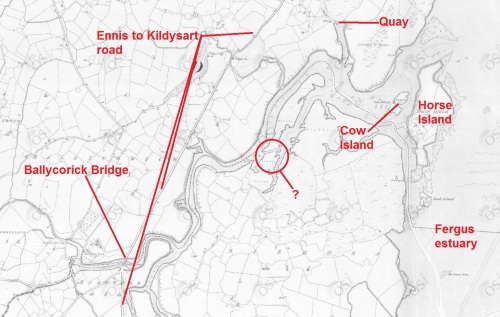 Ballycorick on the Historic 6″ map, annotated

I have circled what looks like a short cut that would shorten the journey along the creek but I have no evidence that the “cut” is artificial or that it was used for navigation; I mark it solely to ask for information about it. I would also welcome more information about both the 19th century water-borne exports from the quay and the 20th century water-borne imports to the wharf.

7 responses to “The rudely constructed quay at Ballycorick”