Here are some items of information about carrying [and one about passenger traffic] on the Grand Canal in the late eighteenth and early nineteenth centuries. The news items come from the British Newspaper Archive.

So much increased is the Corn and F[l]our Trade on the Grand Canal, that twenty boats of sixty tons burden each, are now ordered to be immediately built. The tolls for the last week amount to upwards of £600 and we can with pleasure announce to the public that the Grand Canal was never in a higher state of improvement.

We are not told don’t know who ordered the boats. At the time, the Grand Canal’s Barrow Line had reached Athy [1791] and could thus carry from the Barrow valley, but the Shannon Line had not even reached Philipstown [Daingean]. It seems likely therefore that this corn [grain] and flour trade was from the Barrow.

NOTICE is hereby given, that the Court of Directors of the Grand Canal will receive proposals for drawing a passage [ie passenger] boat every day, back and forward, between Philipstown, Edenderry and Lowtown, distance seventeen miles, the same to be divided into two or three stages, as may be agreed upon; — if in two stages, the middle stage will be at Philipstown Road Bridge — if in three stages, one stage will be at Ticknivin, and another at the bridge of Ballybrittain.

Agreements will be entered into for each stage, or for the whole, as may be found most eligible.

Proposals to be sent sealed up to the Company’s Secretary at No 32, Dawson-street, on or before the 25th day of March inst. The contract to commence from the 10th of April next.

Here is some information about early carrying of cattle on the Grand Canal.

We are authorized to say, that in consequence of the acknowledged utility of the newly adopted mode of conveying cattle for Smithfield market by the line of the Canal, the Proprietors of the Farming Repository, who have contracted for the present Cattle Boat, are determined to extend this accommodation very considerably, and have in preparation other boats for this purpose.

The advantage of supplying the Dublin markets by this wholesome way with food, when generally understood, must of course induce, as it deserves, public encouragement — the best mode of doing which, perhaps, is by giving these boats a preference for freighting merchandise from Dublin to different noted places on the line to Tullamore. This would render the boats fully productive to the proprietors, and, of course, encourage and remunerate their necessary exertions.

The Dublin Farming Repository was [at least in later years] somewhere around St Stephen’s Green; the Smithfield market was on the north side of the Liffey. 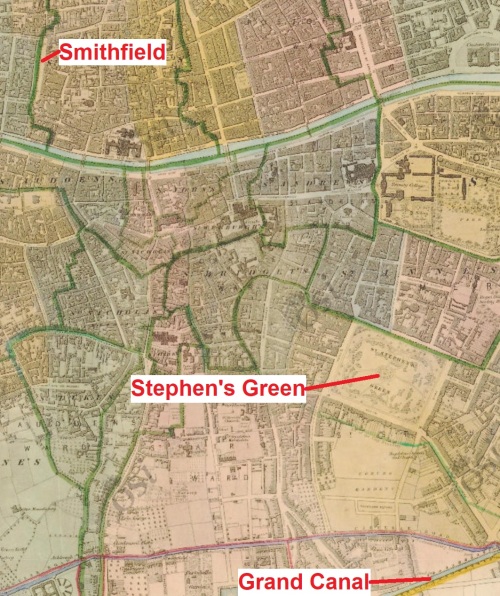 I know very little about the Farming Repository and I don’t know whether its proprietors had any more boats built.

This is an extract from a report of the half-yearly meeting of the Grand Canal Company held on 29 September 1803. The first para is about the company’s negotiations with the Directors General of Inland Navigation to take over the Middle Shannon, between Portumna and Athlone.

Since our last meeting we have had some further negotiation with the Directors General of Inland Navigation, on the subject of our proposal for making the river Shannon navigable between Lough Derg and Lough Rhee; but as that negotiation is not yet terminated by the final answer from the Directors General, and as it will be necessary to call you together, very shortly, to consider and decide thereon, we deem it unnecessary to trouble you with any further particulars on this subject at present, further than to acquaint you that in pursuance of a promise obtained from the Directors General, that they would reimburse us for any money we might expend in repairing the works on the river Shannon between Bannagher and Killaloe, we have made considerable progress in rebuilding the locks at Clonogue, and deepening the canal at that place, and we entertain no doubt, that by the latter end of the month of November next, we shall have that part of the work completed, which with some temporary improvements we have made in the river Shannon at Bannagher, will open a good navigable communication from the termination of our canal at Shannon harbour to Killaloe; and we are assured that the works now carrying on by the Directors General at the latter place, and on the canal from thence to Limerick, will be completed about the same time; so that we have every reason to expect that by the beginning of December next, a navigable communication will take place between the cities of Dublin and Limerick. It is not easy to calculate the beneficial effects which will arise to the Company on so great an extention of navigation as the completion of the foregoing work will open. Our navigation at present terminates at Tullamore, a distance of no more than 44 Irish miles from Dublin. By the completion of the above works it will be suddenly extended to Limerick and from thence to the whole western coast of this island.

The next two paras are interesting for several reasons. First, they show that someone at Banagher was capable of building large boats. Second, they suggest [although they do not definitively show] that the Grand Canal Company was  considering carrying cargoes itself, at least on the Shannon and into the Grand Canal at Shannon Harbour and probably further along the canal, over forty years before the canal carriers acts. Third, they show that the company sought trade from Galway, by sea to Limerick and thence into the inland Shannon — and that they were confident of being able to design a boat that could cope with the rigours of both the canal and the Atlantic. Fourth, they saw the trade from the west coast being carried to Dublin and onwards to Liverpool, a vision that was not realised until steamers conquered Lough Derg and the Irish Sea. Fifth,  they were to be sadly disappointed about the practicability of communication to and through Limerick.

We have already built two boats at Bannagher of forty tons burden, and upwards, whose dimensions are suited to pass on our canal, and are at the same time constructed in such a manner as to navigate with safety the lakes of the river Shannon, and to carry on the coasting and channel trade.

It is our intention to construct a few more boats of the same dimensions, in order to manifest to the merchants of Limerick, of Galway, and of this city [Dublin], the facility with which an extensive and direct commerce may be carried on through the river Shannon, and the Grand Canal, between Galway, Limerick, Dublin, and the port of Liverpool.

This last item is an ad from an independent carrier, Thomas Benson. He is offering scheduled sailings between Dublin and Shannon Harbour. The distance is in Irish miles.

Thomas Benson informs his Friends and the Public, that the line of navigation being now complete between Dublin and the Shannon, he has established a store (No 5) at Shannon Harbour, for receiving and delivering all goods entrusted to his care, and where he has appointed a steady respectable person to conduct his business, for whose faithful conduct he has received ample security, and to obviate the inconvenience of delay, he has built a house for him to reside in, on the spot.

For the further accommodation of those who are disposed to give him the preference, he has so arranged the business, that his established parcel boats shall ply regularly (loaded or unloaded) from Dublin every Thursday and Sunday mornings, and arrive at Shannon Harbour every Monday and Thursday mornings, will return again to Dublin every Tuesday and Friday mornings with equal expedition. The advantage of such certain and speedy conveyance needs no observation, and the great saving of land carriage by water, being 61½ miles for 25s 8d, or 15½d per cwt (furniture or bulky articles excepted) will speak for itself. Goods for Limerick and adjoining towns sent forward on reasonable terms.

If expedition, regular and personal attention, have any claim on the public, T Benson flatters himself his boats are entitled to a preference.

NB Complaints addressed to Mr Benson, Tullamore, will be immediately attended to; and he requests those ordering goods, will give directions to have them labelled “For Benson’s Stores”, to prevent mistakes.