The Lartigue Monorail in Listowel

First, I have to come up with some justification for including this on a waterways website (apart from the fact that I like it) (and that the West Clare is here already).

Well, it’s another piece of industrial (transport) history you could see in the Lower Shannon Heritage Park. But perhaps more convincing is the fact that the Lartigue was set up to carry passengers to Ballybunion, a seaside resort on the south shore of the Shannon Estuary. While Kilkee in Co Clare was (indeed still is) favoured by many Limerick folk, and was served by steamer to Kilrush, Ballybunion was favoured by those from the south of Co Limerick and from Co Kerry. Some people may have come from the city by steamer to Tarbert and thence by road to Ballybunion, which was noted for its caves. It is rumoured that a foreign perversion called “golf” was practised there, no doubt in secret, in later years.

Anyway, the Limerick and Kerry Railway Act received royal assent in 1873 and its station at Listowel opened in 1870. The line seems to have been taken over by the Waterford, Limerick and Western Railway at some stage, but I can’t work out (in Ernie Shepherd’s Waterford, Limerick & Western Railway Ian Allan Publishing 2006)  when that happened. The folk of Ballybunion wanted a branch to their resort town, but didn’t get it.

In 1886 Charles Lartigue was demonstrating his monorail in London — and it was decided that Lartigue’s system would be just the job for linking Listowel to Ballybunion. And so it came to pass, and what may be the world’s most insane railway system was opened in 1888. The Listowel & Ballybunion Railway ran for about nine miles to Ballybunion, with one stop on the way at Lisselton (which seems to be where this bridge is). It carried people, cattle and sand, the last from the beaches of Ballybunion: sand was a valuable fertiliser in the nineteenth century. The line was severely damaged in the Irish Civil War and it closed in 1924; very little of the original equipment remains.

Here is how the Illustrated London News described the new line in 1888.

The terminus at Ballybunion (ILN 1888) 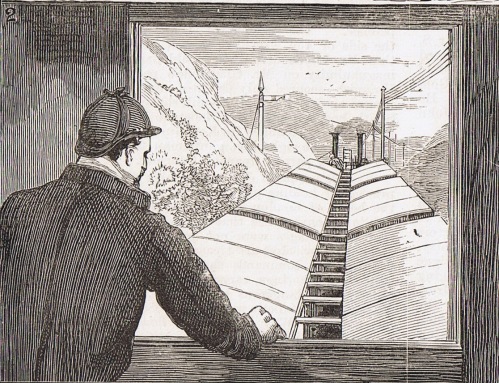 The town of Listowel now has a recreation of a small section of track, an engine and two carriages, operated by volunteers (their website is here). There is a small but very good display of photographs in their building (the former Main Line goods shed). 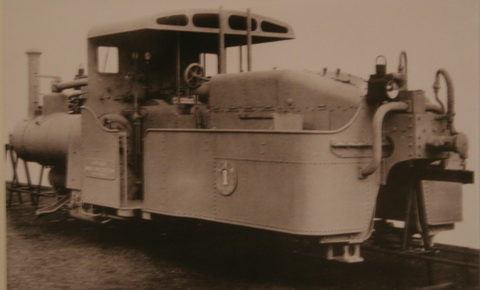 Original Hunslet engine: photo on display at the Lartigue

Original carriages: photo on display at the Lartigue

Three short films are shown. The first is newsreel footage of the operation of the line, including its answer to the level crossing. The second seems to be from a television report on the recreation, using some of the same footage. The third is about the last train on the Main Line through Listowel. The three together are entertaining, evocative, informative, and by themselves worth the modest price of admission. The building also has some artefacts on display. 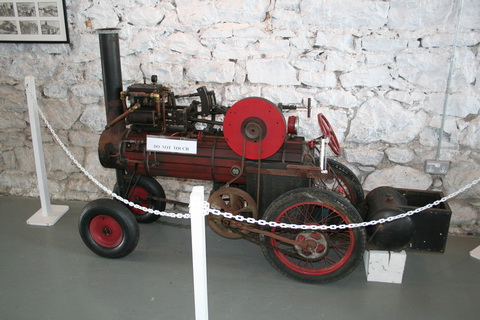 Nothing to do with the Lartigue, save that this working steam engine was made by the Lartigue volunteer driver 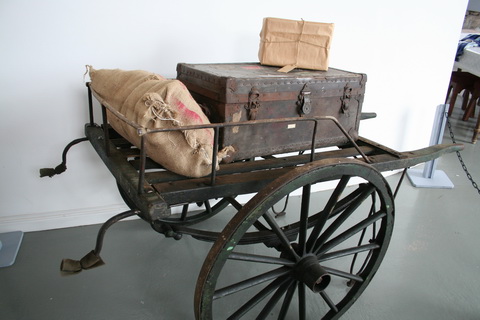 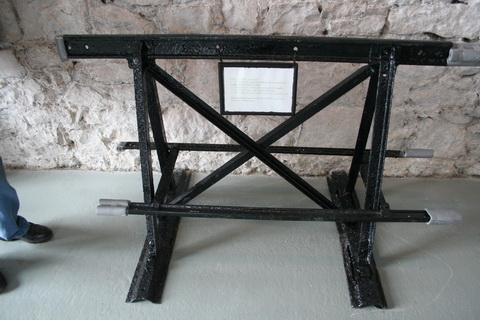 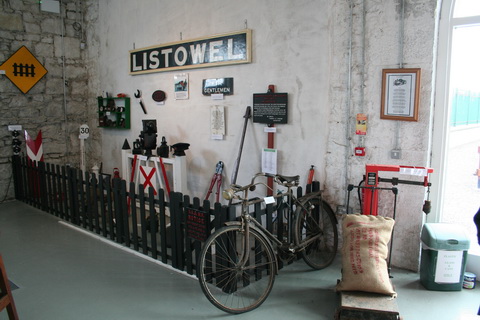 And there are models. 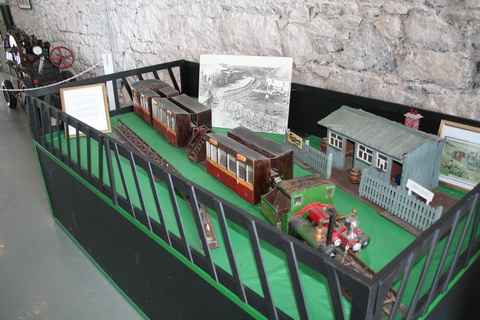 Model of Listowel Main Line and Lartigue stations. The building furthest away is the Main Line Goods Shed, now the Lartigue HQ, and the recreated track extends away from there

Model explaining the “switches” (the Lartigue’s version of points). Apologies for the poor quality of this and the next photo

On the left, a model of the Lartigue’s “flying gates”; on the right, an illustration of the necessity to keep the loads balanced on the two sides of the train

I have used the word “recreation”: this is not a restoration, because there was very little left to restore. But the recreation of the engine, carriages and track (by Alan Keef) appears to have been done with great care and skill, after gathering as much information as possible about the original Lartigue system. The big change is that the engine is now diesel, not steam (which is sensible); some smaller changes reflect modern health and safety requirements. The volunteers who were on duty when I visited were extremely knowledgeable — as well as being friendly, helpful and ready to chat. Anyone with an interest in transport will find it easy to spend at least two hours at the railway.

Part of the Lartigue’s original site, beside the current site, can be visited. It includes the foundations of the old engine house and two switches, as well as a wall of the original station house, the only building on the railway that was not built of corrugated iron. There are photographs and descriptions around the site to explain the layout. 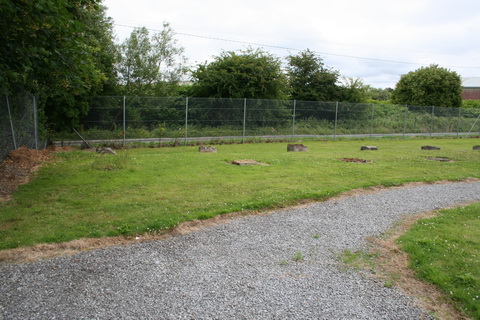 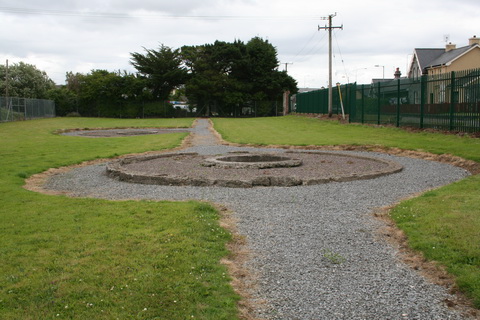 Information about the old station house

We return to the new site.

Here is a rough sketch of the layout of the track. It has been designed to reproduce the essential features of the system with a much-reduced length of track. So there is much use of the switches and turntables, but relatively little travel.

You travel from the station to the far end, where you can get out at the platform and watch as the engine is disconnected from the train and turned on the turntable. It then runs around the carriages on the passing loop (correct me if I’m getting the railway terms wrong), reverses back over the switch and reconnects to the other end of the train, before drawing it back to the station. At the far end, it stops at the middle platform. The engine goes to the turntable, turns and goes through the switch to its old position (but facing the other way). Then it reverses through the switch towards the station, before switching to the passing loop, going through the next switch and reversing to push the train back to the station platform. 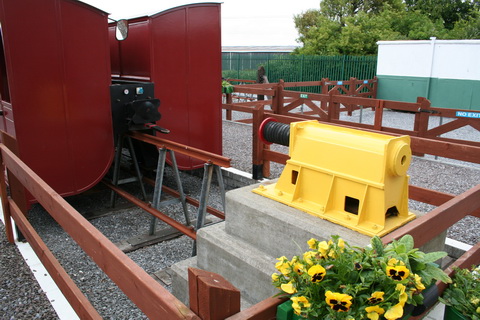 Buffer at the station end 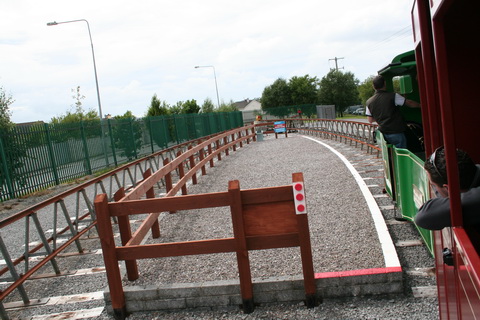 Looking down the tracks

One end of a switch (equivalent of points). Note the red knob on the locking mechanism: if it’s up, the switch is unlocked 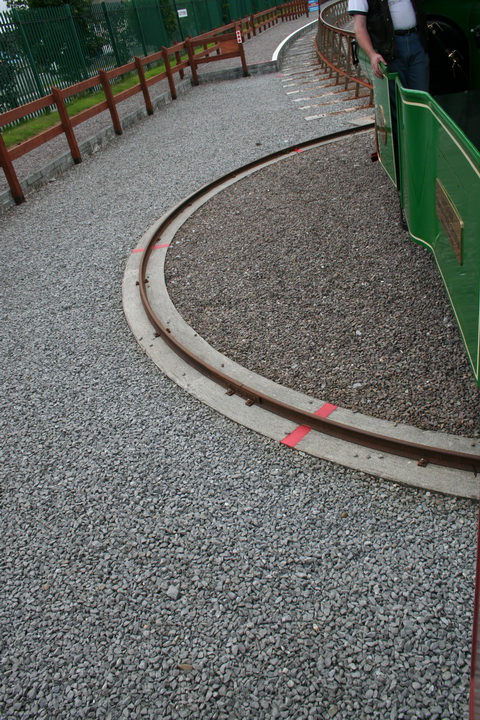 Markings on a switch

A section of track

The original had two boilers, two fireboxes etc for balance

The driver, who built the small engine displayed inside

The original Lartigue had three engines, so this is No 4

See this article at the invaluable Museum of RetroTechnology for more on the technical aspects. Wikipedia has some information too. 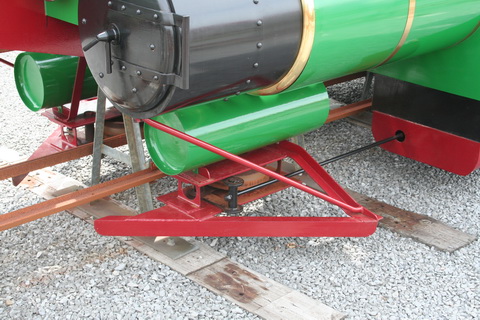 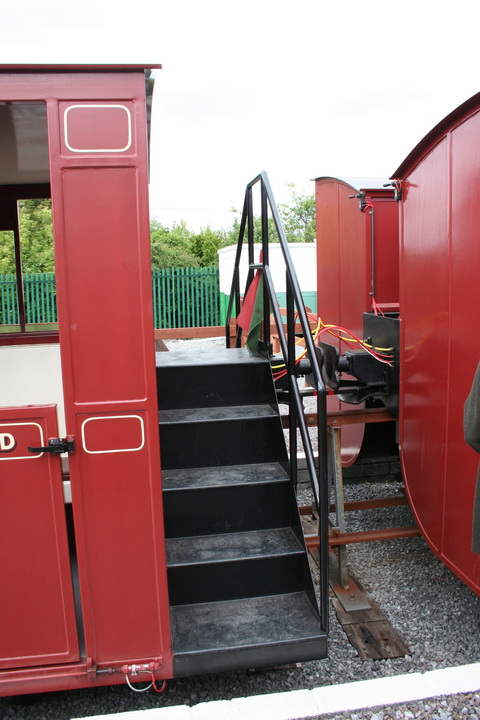 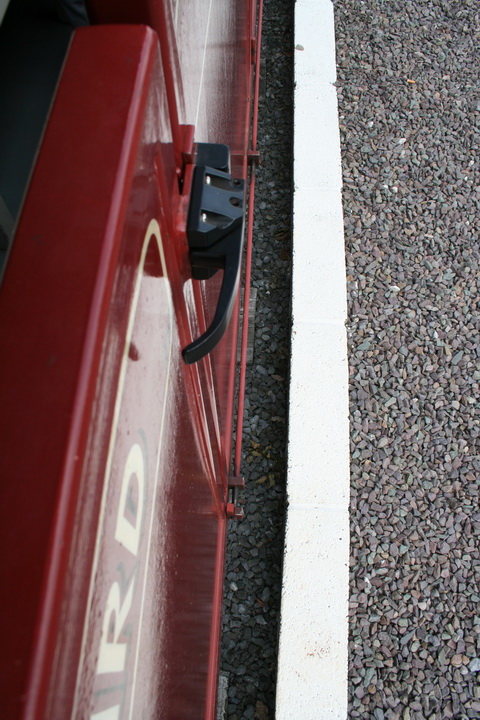 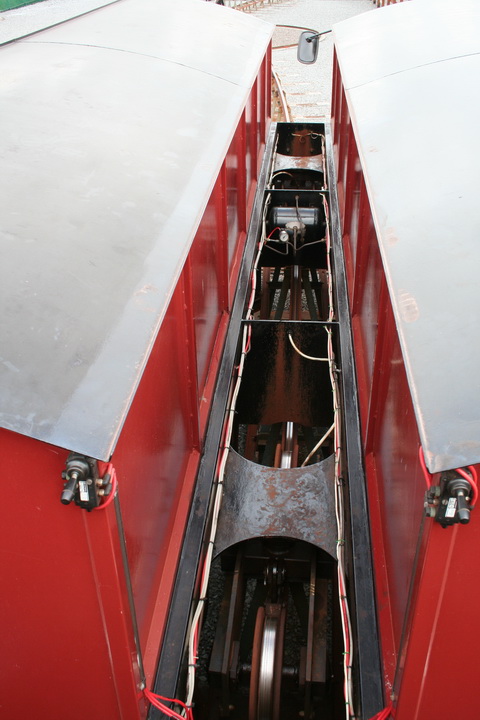 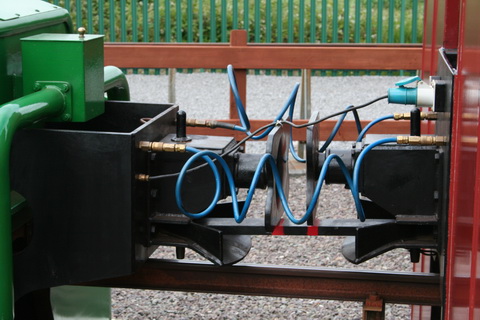 Here is our driver, contemplating the long road ahead.

Turning at the far end 1 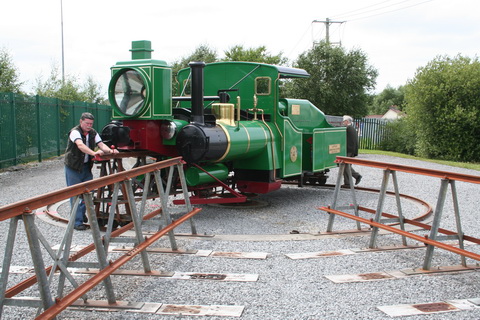 Turning at the far end 2

Turning at the far end 3

The station in sight

Having hauled its carriages to the middle platform, the engine goes to turn on the station turntable, the first step in an elaborate manoeuvre that will enable it to push the carriages the last few yards into the station. 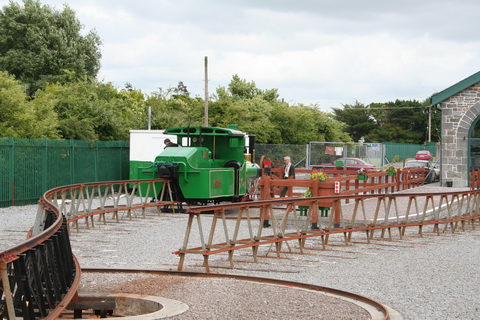 On the station turntable 1

On the station turntable 2 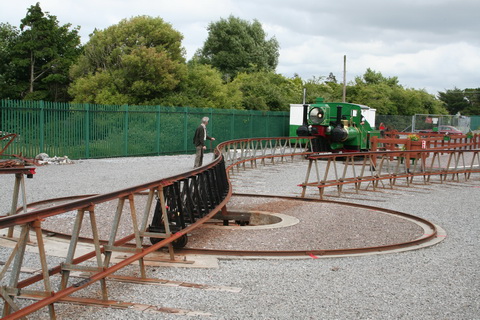 On the station turntable 3

Now the engine has to get on to the passing loop, so that it can reach the far end of the train and push it backwards into the station.

The engine approaches the switch from the turntable

It crosses the switch to the rear of the train 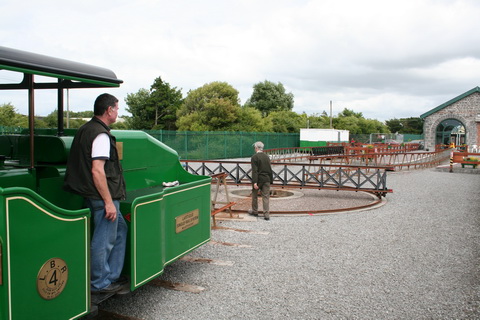 The switch is swung the long way around … 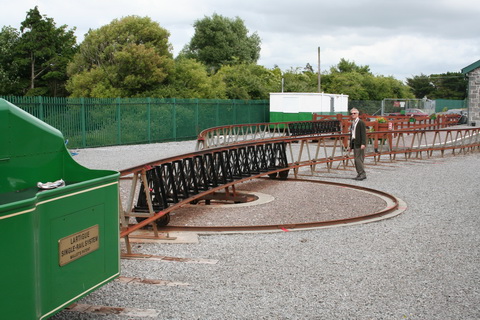 … reverse towards the station 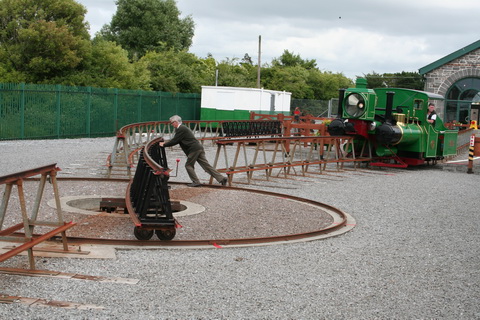 The switch is swung again …

… and the engine drives forward … 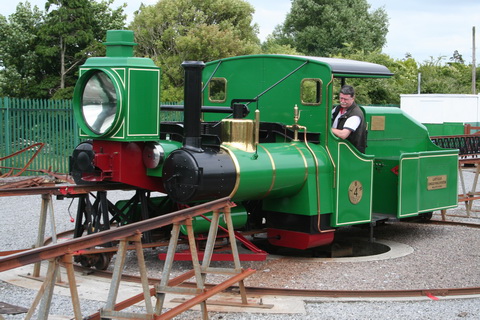 … over the switch and on to the passing loop 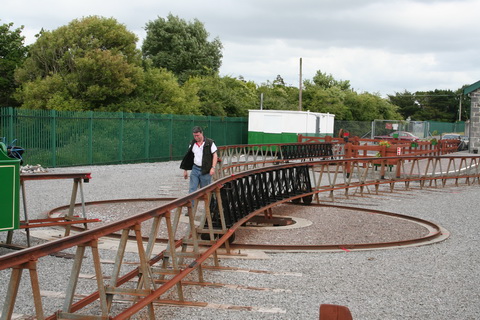 The driver resets the switch … 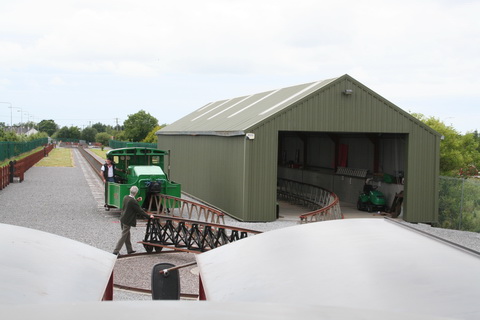 … and, having passed through the middle switch, can now reverse and push the train back to the station. Simple, isn’t it?

If you can correct or supplement anything I’ve written here, do please leave a comment below.

If you want to be notified of new material on this site, go to the front page and subscribe to the RSS feed: you’ll get a short notice (perhaps with a photo or two) whenever new material is added or there have been significant additions to existing material. You won’t get ads.

There are four nice photos of the Lartigue from 1914 on this page (h/t Antoin Daltún). There is a 3½-minute video of the original Lartigue on the British Pathé website. It doesn’t work on my PC, perhaps because of my ssecurity settings, but I was able to look at the many stills.

The other monorail beside the Shannon River is covered here.

Finally, I heartily recomment a visit to the Lartigue in Listowel.

13 responses to “The Lartigue Monorail in Listowel”