In May 1941 two German oil tankers sailed to the Arctic; two more, with two reconnaissance ships, to the south of Greenland; two more with a supply ship to the area between the Azores and the Antilles and another to Bergen, while four weather ships sailed to the Atlantic. Those were the first moves in an elaborate seaborne ballet that was to bring Castle Archdale, on Lough Erne, into the front line of World War II.

The harbour at Castle Archdale

The war at sea

Neither Russia nor the USA was involved in the war at that stage. Germany and Italy had captured Yugoslavia, Greece, Norway, Denmark, Holland, Belgium and France. The UK stood alone, with the entire coastline of continental Western Europe in hostile hands.

Convoys were attacked by German U-boats (submarines) operating in wolf packs large enough to overcome a convoy’s few, underequipped escorts. In the air, long-range Focke-Wulf Condors posed a threat to which CAM-ships, which could launch but not retrieve a single fighter, provided only a partial answer. German armed merchant cruisers, notably the Atlantis, were extremely successful.

And then there were the German cruisers, pocket-battleships and battleships, which had been designed as commerce raiders: the fast battleships Scharnhorst and Gneisenau sank twenty-two merchant ships (totalling 116,000 tons) in two months in early 1941. Even more powerful were the battleships Tirpitz and Bismarck, both over 42,000 tons unladen, 53,000 laden, and capable of 31 knots. With 165,000hp engines, eight 15-inch guns, twelve 5.9-inch guns, sixteen 4.1-inch anti-aircraft guns, sixty quick-firing light guns, six aircraft and thirteen-inch hardened steel armour, Bismarck was a match for any British battleship. On Sunday 18 May she sailed, with the heavy cruiser Prinz Eugen, from Gdynia in Poland, through the Kattegat and Skagerrak and up the Norwegian coast.

The sinking of HMS Hood

Bismarck replied a second later, straddled Hood with her second salvo, hit her with the third and, at a range of 16,500 yards, sank her with the fifth. The Hood, for so many years a symbol of British naval power, went down in two minutes: 1415 men died and only 3 survived. Her deck armour was inadequate: the weakness that had afflicted British battle-cruisers at the Battle of Jutland in World War I.

Prince of Wales, which had not been properly ready for sea, was forced to withdraw. Bismarck headed for Brest, detaching the Prinz Eugen, and Norfolk, Suffolk and Prince of Wales gave chase.

The next attack on the Bismarck was by nine Swordfish torpedo-bombers from the carrier Victorious, led by Lieutenant-Commander Eugene Esmonde of Drominagh on Lough Derg. But early on 25 May, Norfolk and Suffolk lost contact with Bismarck. For over twenty-four hours the pursuing fleets did not know where she was. Then, as Ludovic Kennedy put it in Pursuit: the sinking of the Bismarck:

In the dead of the night … a Catalina aircraft of Coastal Command, No. Z of 209 Squadron, was racing in the darkness across the trout-filled waters of Lough Erne in the north-west of Ireland. The co-pilot was an American serviceman, Ensign Leonard B. Smith, wearing the uniform of the United States Navy – a fact known then to very few. The plane rose gracefully towards the stars, circled once over the sleeping countryside, set course south-westwards across Donegal Bay and Eagle Island towards the open sea.

What was a uniformed member of the armed forces of a neutral state, the USA, doing at the controls of a British warplane? And what was that plane doing flying over Donegal, in territory of another neutral state?

Lower Lough Erne was the most westerly flying-boat base in the UK. Opened in February 1941, its HQ was at Castle Archdale with a training base at Killadeas. Castle Archdale provided accommodation, canteens and recreation facilities, stores, a control tower and station headquarters, hangars, flying-boat pens, a slipway, workshops and a machine-gun range.

Looking from the flying-boat dock at Castle Archdale. The slipway was further to the left

There were 108 flying-boat moorings offshore as well as 40 boat moorings. A Royal Engineers detachment used the Kathleen to keep the lower lake free for the flying-boats and patrolled the upper using the Cairnbin and St George, based at Crom Castle. A team from McGarry’s boatyard on Lough Neagh maintained the moorings and buoys, salvaged any aircraft or boats that sank — and built two salvage barges, Rossinan and Rossclare.

The remains of a small lighter

The first flying-boat to land was a twin-engined Vickers Supermarine Stranraer, but 209 Squadron arrived in April 1941 equipped with the medium-range Saunders-Roe Lerwick. This aircraft was intended to replace the long-range Short Sunderland, allowing Shorts to concentrate on producing on the Stirling bomber, but the Lerwick’s handling was so appalling that only 21 were built. By the time its faults became apparent, though, Shorts had dismantled the Sunderland jigs and it took time to resume production.

The coming of the Catalinas 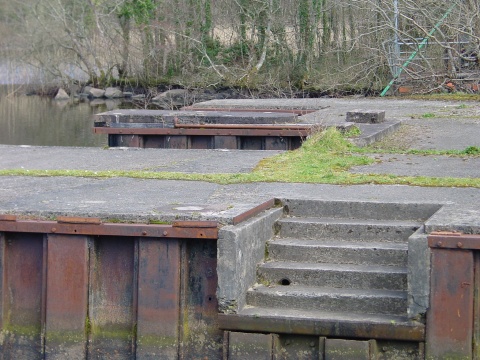 Some details of the flying-boat dock

Officially, seventeen US Naval Air Service volunteers went to train the British pilots on how to fly the planes. Before they left, though, the Chief of Naval Operations told the volunteers that the US would be entering the war soon and that they should learn about war flying while in Britain. Eight Americans went to Oban and nine, including Ensign Leonard (“Tuck”) Smith, to Castle Archdale’s 240 and 209 Squadrons. When they arrived, nine British co-pilots went on leave and the Americans acted as full crew members.

The sinking of the Bismarck

On 26 May, they reached their patrol area after six hours and Smith took the controls. About half an hour later, they saw a dull black shape about eight miles away. Despite being hit by gunfire they sent off a report, shadowed the Bismarck until another Catalina took over, then headed for Castle Archdale, arriving at 9.30pm. Bismarck then became the quarry of eight battleships and battle-cruisers, two aircraft-carriers, eleven cruisers, twenty-one destroyers, six submarines and over 300 air sorties. The end came on the morning of 27 May when the Bismarck, short on fuel, her steering jammed, was battered unceasingly by the heavy guns of the Rodney and the King George V, before being finished off by a torpedo from the cruiser Dorsetshire. Only 107 survived from a crew of over 2000. Ernle Bradford wrote of the widespread feeling in the British fleet of

nothing but admiration and respect for the outstanding gallantry with which the Bismarck had fought.

The importance of air cover

Lough Erne’s contribution to the hunt for the Bismarck heralded the end of the battleship era: without air protection, the big ships were effectively obsolete. Germany realised that, and brought the Scharnhorst, Gneisenau and Prinz Eugen home to Germany.

The eventual Allied victory in the Battle of the Atlantic came from three elements: the huge numbers of Liberty ships (freighters), more and better convoy escorts (frigates, sloops and corvettes) and the provision of air cover. The small American escort carriers meant that convoys could bring their own air protection with them, but even then Lough Erne, with its long-range flying-boats, had a vital role in detecting and attacking U-boats.

Flying-boats were moored offshore in this relatively sheltered bay

When the war in Europe ended on 8 May 1945, U-boats at sea were ordered to surface and were escorted, some by Coastal Command aircraft, to various ports including Lisahally on the Foyle. The last operational patrol from Castle Archdale was on 3 June 1945. Catalinas from other areas were assembled at Killadeas and, on 18 August, Castle Archdale closed down. Many of the Sunderlands and Catalinas were scrapped, but some Catalinas were scuttled on the lake in 1947.

And Z/209 flying over neutral Donegal? Southern Ireland’s neutrality was distinctly pro-Allied, and one of its manifestations was the Donegal Corridor, which was kept secret during the war. Allied aircraft were allowed to fly over a narrow corridor to the Atlantic, saving them the long journey around Inishowen, and a British rescue boat, the Robert Hastie, was stationed in Killybegs — whence its crew even engaged in the traditional border pastime of smuggling.

23 responses to “Flying-boats in Fermanagh”