The third set of Shannon Commissioners, who took office in 1839, were responsible for much of the work that defined the non-tidal Shannon as it is today. They had a more limited role on the Shannon Estuary: they built a number of piers in places where the local landowner (or owners) were willing to contribute about half of the total cost. One of those places was Kilteery, where the Earl of Clare paid £918/2/6 for a pier that was thought to be “favourably situated” for shipping out agricultural produce. His Lordship had previously been compensated by the Commissioners for the compulsory purchase of “Land and beach” at Kilteery to be used for the new pier: he received the sum of five shillings (5/0).

The Shannon Commissioners wrote of Kilteery in 1842:

This pier was contracted for on the 18th May last [ie 1841], since which time the contractors have been busily employed in preparing stone at Foynes Quarry, excavating and setting the masonry in the foundations and walls of the north and south faces of the pier, of which they have now finished about two-thirds; and had it not been for the severity of the weather, the frequent gales, and the unprecedented rainy season, the work would by this time have been nearly completed. The works have been carried on with energy. The only remaining portion to be built is that which is most exposed to the sea, and the foundations of which can only be laid at low water of extraordinary spring-tides; but there is every reason to expect that the entire will be completed early in the ensuing season.

The average number of persons employed daily upon the work, from its commencement on 7th June up to the 31st of December 1841, was 61, being equivalent to 10847 days’ work.

The Third Report of the Commissioners for the improvement of the Navigation of the River Shannon, Ireland; with an appendix Ordered, by The House of Commons, to be Printed, 2 March 1842 [71]

Wednesday last the Earl of Clare, accompanied by James Harvey Esq, left this [Limerick] in the Garryowen steamer, Charles Bingham commander, to inspect the new pier at Kilteery, recently completed by the Shannon Navigation Commissioners. This important public work, which stands upon the Limerick side of the river below Glin, will open an export for the produce of a vast tract of country, including Athea, Abbeyfeale and Newcastle. His lordship contributes materially to this public improvement by opening a new line of road in connexion therewith to Abbeyfeale.

There was 16′ of water off the end of the pier at spring tides and it lay fair to the channel up and down the river. However, in their eleventh and final report the commissioners said that they had had difficulty in finding suitable foundations at Kilteery, within their budget, so the mole [presumably the part stretching towards the deep-water channel] was shorter than they had intended.

By late December 1842 the Commissioners had employed a person to take charge of the pier and to collect fees for wharfage and quayage; in what remained of the year he collected 1/3 in wharfage and 6d in quayage. The rates were set just to cover the collector’s wages and any minor repairs, which they hoped would not be needed for some years.

In their sixth report, covering the year 1844, the commissioners said that they had built a parapet wall to protect people working on the pier and to preserve roadway itself in strong westerly gales. Four men had worked for just over twenty days each to build the parapet. The parapet is presumably the wall on the right-hand side of the photo below.

The west side of the pier (photo courtesy David Kitching 2009)

Kilteery, like several other estuary piers, was designed so that boats could tie off the end and load or unload cargoes. It was not a harbour where boats would stay overnight (or for longer periods). Produce loaded there would not have been exported directly: it would have been carried to Kilrush or Limerick, the customs ports, and transshipped to a seagoing vessel.

But only a few years after its  construction, it was clear that Kilteery pier had not become an important transhipment point for the “export for the produce of a vast tract of country, including Athea, Abbeyfeale and Newcastle”, which the Earl of Clare was presumably hoping for. It is impossible to say whether there would have been more traffic if there had been no Famine.

John Washington, writing about the port of Limerick for the Tidal Harbours Commission in 1846, thought that the pier was in the wrong place:

A little below Foynes is the pier of Kilteery, which is said to have no traffic. […]

These two piers [Kilteery, Kildysart] are examples of the bad working of the clause of the Act of 1825
[5 Geo IV c64], which requires local contributions as an indispensable condition before making a grant of public money. This clause has had the effect, occasionally, of fixing the construction of piers on inferior instead of on the best sites.

Local contributions will rarely be obtained, except in a few public-spirited instances, but when the individual subscribing will derive personal advantage; he therefore proposes the site as the condition of his subscription; and although a preferable site may not be far distant, if local contribution cannot be obtained for it, the Act leaves no discretion to decide in its favour, and either the inferior site must be adopted or the measure be given up.

The general principle of local contribution is good, but its universal and indispensable application practically renders the selection of the best sites impossible. Thus the thriving villages of Foynes and Glin are left without the accommodation they may justly claim, while Kilteery and Kildysart have piers, which apparently are of little if of any public benefit.

Appendix A Limerick No 7 Report of the Examining Commissioner [John Washington] on the Port of Limerick in Tidal Harbours Commission Second Report of the Commissioners with Minutes of Evidence, Appendices, Supplement and Index presented to both Houses of Parliament by Command of Her Majesty Her Majesty’s Stationery Office, London 1846

To be fair to the Earl of Clare, who paid his dues and also spent money on a new road, it should be pointed out that the landlords at Glin and Askeaton had had the opportunity to have improvements on their land but had rejected them. The same applied to the landlord at Foynes, but he [Lord Monteagle, previously Thomas Spring Rice, who had dreamt up the whole idea of the Shannon Commissioners in the first place] did join in, and pay up, late in the day. He spent more than the other estuary landlords on having facilities built at Foynes, which has become the most important port on the Shannon estuary.

The Shannon Commissioners published detailed lists of what was loaded and landed at each of their piers up to 1849. Here is a table for Kilteery, derived from the commissioners’ annual reports. 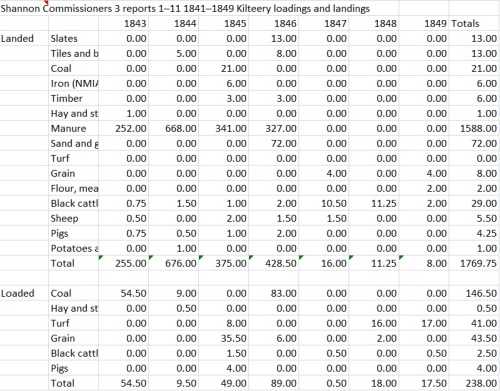 Shannon Commissioners: traffic to and from Kilteery 1843–1849

Almost 90% of the cargoes landed consisted of manure. That may have been sea manure: sand or weed harvested from the sea. It might also have been horse- or other manure from Limerick: disposing of manure was an industry in itself.

It may be surprising that over 60% of the cargoes loaded were coal: there were small coal pits close to the pier.

The coal pits were no longer shown on the OSI 25″ map from around the end of the 19th century, but there was a lime kiln in a field beside the road down to the pier; its presence suggests that lime may have been shipped from here to those parts of southern County Clare that needed fertiliser. 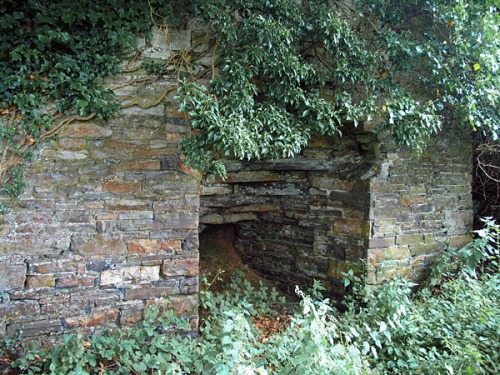 The quantities of agricultural produce loaded at Kilteery were insignificant: half a ton of hay or straw, 43.5 tons of grain, 2.5 of black cattle (cows) and 4 of pigs in seven years. The income from wharfage and quayage was equally insignificant: 3s 6d in quayage and 1s 4d in wharfage in 1849.

The Board of Works took over the Shannon infrastructure from the Shannon Commissioners. Under the Shannon Act 1885 the Board relieved itself of responsibility for most of the estuary piers, passing over responsibility, in this case, to Limerick County Council. I believe that the council appoints lifeguards in the summer months, as Kilteery is a popular bathing place, but I can’t find anything relevant on the council’s blasted tarted-up website. Kilteery has also been designated as a Fáilte Ireland viewing point, which I’m sure is nice.

Perhaps more significantly, the pier has had some recent repairs, which you can read about on the website of Messrs Punch Consulting. Compare their photo of the ladder on the west side of the pier with this one. Maybe the ladder is concealing the damage, but it looks from the Punch photo as if the stones at the end had shifted significantly.

Ladder on the west side of the pier

But I am myself more interested in two other stones, one at the base of the pier and one on the beach to the west. Here is the first.

The stones are cuboids, standing on one of their short faces. One side of each has the letters S.C with a vertical arrow that starts between the letters and points upwards. There are similar stones (some with pointed tops), similarly marked, at other piers around the estuary, and my guess is that S.C means Shannon Commissioners.

Close-up of the stone

At that time it was standing on what might be called a beach to the west of the pier, obviously wetted at high tide. I don’t know whether it is still there: I hope it is and that some civic-spirited soul might rescue it and place it in a safer, more appropriate position at Kilteery, to recognise the people who built the pier.

One response to “The stones of Kilteery”