A bonfire at Collins Barracks

The National Museum of Ireland estimates that it has almost four million objects in its four collections. The collections are:

According to the National Museum, the folklife collections …

… mainly contain objects representing the material culture of the traditional way of life in Ireland in the period between the end of the Great Famine in the middle of the 19th Century and the exhausted decade that followed the end of World War II in the 1950s. The collections may be divided into four broad areas: farming and fishing; trades and business; social life and pastimes; and the home and daily routine.

There is material on: 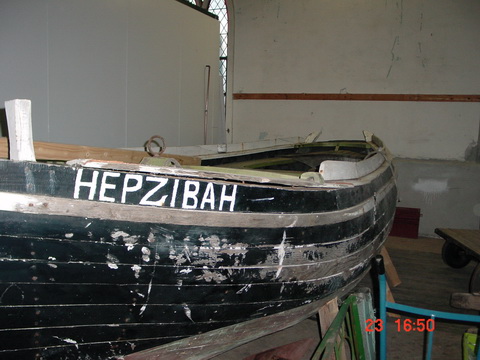 This may be the replica sailing boat (gleoiteog)

It is not clear how that heading came to be applied to what the museum itself describes under two headings: Decorative Arts and Historical. It would be wrong to assume that there is anything industrial to be seen.

There is stuff about killing people, under the headings Easter Week, Flags (though some are non-military) and  Military History. There are 2000 frocks and other items of clothing (Costume) as well as Lace and Jewellery and Costume Accessories. The Textiles, Furniture and Glass seem to be at the crafty end rather than the mass produced, and the Metalwork is mostly silver rather than, say, steel.

There is much arty stuff (Ceramics, Eileen Gray, Fine and Graphic Art — why not hand it over to the National Gallery?). There are dolls and other toys (Childhood),  Musical Instruments, stamps and coins. Asian material all seems to be classifiable under some other heading. Historical seems to mean political.

The Transport section recognises two types of vehicle: there are carriages of the gentry (where Folklife has those of the peasantry) and there are “schedules, models, photographs, drawings” of 19th-century railways. And there are Scientific Instruments “relating to surveying, weights and measures, measurement of time, astronomy, drawing and communications”.

A Day on the Bog

I seem to remember, from when ah wur a lad, primary schoolbooks that assumed that all children either lived in the country or were sent there for the summer, to work on the farm owned by some relatives, while their unfortunate parents lived their second-class existence in a town or city. Essays had to be written about days on bogs. Irish language lessons included long lists of birds and plants that I wouldn’t have recognised (or had any interest in) in English, never mind in Irish. History was a long struggle of Noble Celts against oppressive Saxons and history ended when every peasant got thirty acres and a cow. Ireland was an agricultural country and industry was something that foreigners did, except in a few protected sectors, most of them linked to processing farm outputs.

It all seemed to be intended to show that Ireland was as Éamon de Valera wanted it to be:

… a land whose countryside would be bright with cosy homesteads, whose fields and villages would be joyous with the sounds of industry, with the romping of sturdy children, the contest of athletic youths and the laughter of happy maidens, whose firesides would be forums for the wisdom of serene old age.

And the National Museum seems to have decided to continue the struggle. In its version of Ireland — NatMusIreland or NMIreland — there are no towns or cities. There is no public transport, although there are sketches for that wildly innovative idea of the early nineteenth century, the railway. There are no internal combustion engines apart from those on four tractors. Sails have been invented, but neither steam engines nor iron hulls, and the flying machine does not exist (unless there’s one shown on a stamp).

Not in the National Museum: a Bolinder

NMIreland has not heard of the industrial revolution, or electricity, or manufacturing. Its land is ungoverned: no policing, courts or civil administration, although the museum does admit the existence of armies, useful for Noble Celts fighting the Saxons. Vast areas of commerce — accounting, banking, distribution, retail (apart from village shops and pubs) — and almost all service industries are a closed book. Public services like lighting, water supply, drainage, roads, schools and health services are ignored.

The National Museum is not worthy of the name. It is a random collection of collections: a scrapheap of whatever happened to find its way into the taxpayer’s care. It does not present any sort of coherent picture of national life, past or present, and such picture as it does present is of an idealised rural lifestyle that few ever followed. It omits the modern, the industrial, the urban and, in so doing, it distorts the picture of Irish history that is presented both to natives and to visitors.

If its Statement of Strategy 2008–2012 is anything to go by, the museum is determined to hang on to what it has. Its five “key strategic objectives” are:

It seems to be focused on its collections, not on what they might be for. This sentence does not make me confident that it has a rational policy for getting rid of stuff:

Important work is being done, and some of it is at an advanced stage from the perspective of acquisitions, de-accessioning, disposal, and inventory policies and procedures. The importance of such work is recognised.

There is quite a lot of waffle in the Statement of Strategy, but that sentence stands out.

I wouldn’t mind the National Museum’s devoting a lot of space to frocks if it also devoted space to Bolinders, steam engines, trams, pot stills, water-wheels, turbines and other interesting items. But as it is, some of the stuff in the existing collections will have to go. Some of it can simply be burned (how many eel spears does the museum actually need?), some can be sold and some can be given away to anyone who wants it.

The stamps could go (unless the terms of a bequest forbid their sale). They are the ultimate two-dimensional objects; they could be scanned, the images put on tinterweb and the originals flogged off. Likewise the coins: record them, put up the images and flog the originals.

But sales won’t achieve enough of a reduction in the museum’s stock. There will have to be some scrappage too, and I suspect it would pain the museum’s curators too much to have to do it themselves. So I suggest that all items not currently on display, and not saleable, be put in a pile at Collins Barracks. Let local communities, heritage centres, small museums and so on select whatever they want. Then let each curator save (say) a dozen items from the heap, and burn the rest. Including the frocks. And the stuffed bunnies.

The general plan, then, is to sell as much as possible, and start buying some new stuff. Oily, greasy, dirty stuff. Engines. Machines. Things having to do with the rest of Ireland: the part that is not forever marooned in de Valera’s dream.

3 responses to “A bonfire at Collins Barracks”