Folk who have been on the River Shannon will know the Little Brosna as the river that enters the Shannon from the east, just below Meelick (Victoria) Lock. The Heritage Boat Association organised a small-boat expedition up there in 2007 (there don’t seem to be any photos online) and reported lots of water for at least a mile upstream. Lewis’s Topographical Dictionary (1837) reported of Parsonstown (now Birr), Co Offaly, that:

Large quantities of corn, flour, spirits, butter, cattle, sheep, and pigs are sold here; and in return, timber, iron, drapery, groceries, coal, and most other articles for domestic consumption are brought in. The want of water carriage to facilitate the conveyance of commercial commodities is severely felt; a plan has consequently been proposed to form a navigation along the valley of the Brosna from Croghan bridge, about half a mile below the town, to the Shannon, from which river the Brosna is navigable for two miles for the largest barges ; thence the line is proposed to be carried by a still water navigation until the channel of the river can be again made available, at about 2.5 miles below the town.

There is no sign that the proposed “still water navigation” was ever built. But Lewis also says

The Lesser Brosna, which joins the Shannon below Banagher, is the boundary between this county and Tipperary, a distance of seven miles, and has been rendered navigable from the Shannon for about two miles above Riverstown bridge, for small turf boats.

That seems to be jumping the gun, as without the “still water navigation” it would have been difficult to reach Riverstown (which is a little upstream of Birr) from the Shannon. Looking at the stream through Riverstown today, it is hard to believe that any sort of cargo was carried on it, but presumably the mill weir kept the level up – and the river does seem to be deeper further up. 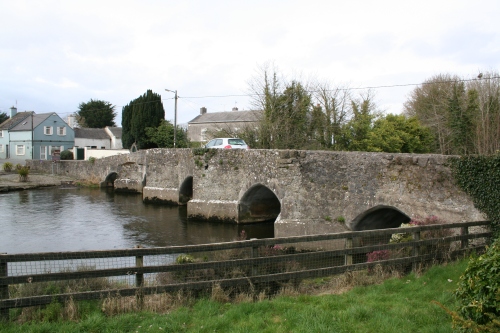 The bridge at Riverstown 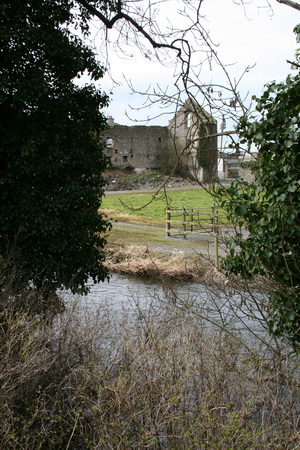 There is other evidence to support Lewis: the 1830s Ordnance Survey maps and the 1850s Griffiths Valuation maps both show a quay a little way upstream of the village of Riverstown. The quay is shown as being just downstream of the point at which a stream enters the river. 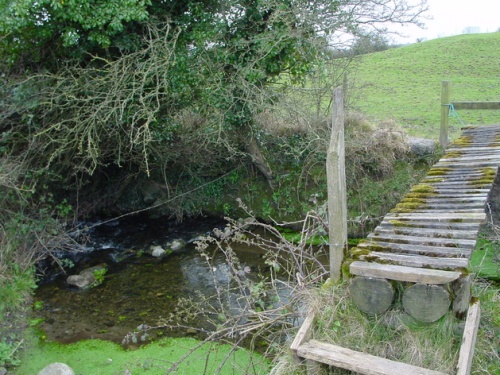 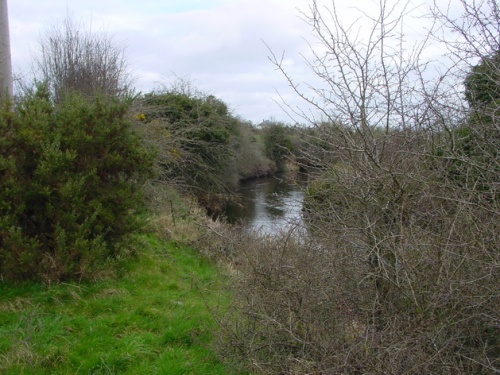 The river sweeping down towards the quay site

A boat coming downstream would be swept in towards the quay site. I could not assess the depth, but the water did not appear to be particularly shallow and the current seemed to be fairly strong. 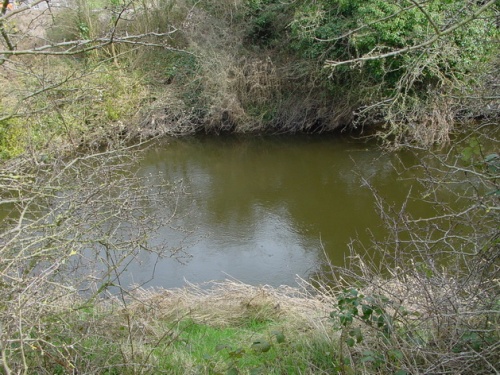 Looking down at the river below the quay site

There is little eveidnce of the quay itself apart from the large amount of stone on the site. 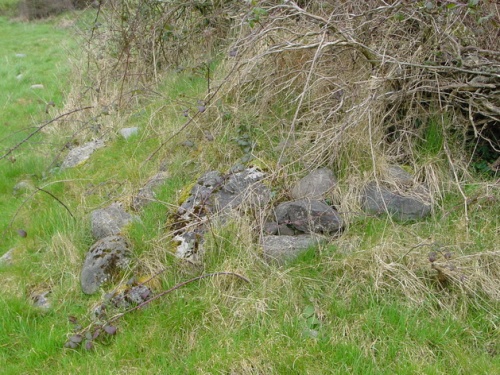 Some of the loose stone on the bank 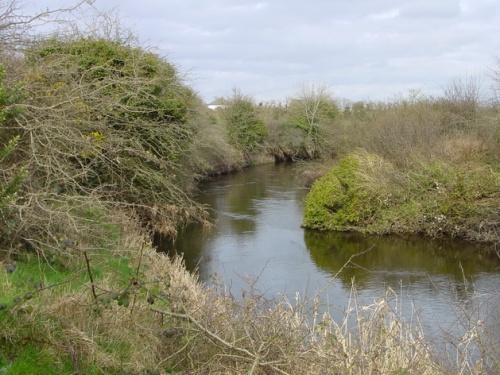 The river below the quay site, heading for Riverstown

Further upstream, opposite Tinnakilly and in what appears to be a bog, the OS map shows a channel bearing the legend “Boat drain”. That term is used in other places on the OS maps; a recent Lough Neagh website also uses it for what is otherwise called a cove: a small cutting in which boats are kept afloat. (I would be grateful for a formal definition of a boat drain, if anyone can supply such a thing.) This evidence seems to be consistent with Lewis’s account, and turf could have provided a cargo for the navigation. The nearest house was, I was told, originally a creamery.

Further upstream, near Rathbeg, the magic word canal appears on the OS map: a short canal cits off a bend in the river. And yet further up, at Gloster House, a channel with suspiciously straight lines, with trees growing alongside it, joins the river. Its beginning is even further up, in the stream supplying Brosna Flour Mills. But instead of rejoining the river immediately below the mills, the outflow carries on in a long straight channel past Gloster House. I don’t know whether it was used for freight, to supply water or for some other reason, but I presume there was some good reason for the digging out of such a long channel.

So the Little Brosna offers not one but two former navigations, a stretch of canal and a mysterious channel, and the stretch to Riverstown was used for carrying turf.

Online access to the  OS maps costs money, but the Griffiths Valuation maps are available free of charge on the Ask about Ireland website. The caveats given there must be taken seriously: I have found the system to be less than fully reliable. Still, it is free, and they do warn you.

One response to “The Little Brosna”