The hidden quay of Latoon

The main road from Limerick towards Galway is the N18; its motorway stretches are called M18. Here is part of the route.

This map doesn’t distinguish between motorway and non-motorway, but the stretch shown is now motorway, with a speed limit of 120 km/h.

The body of water to the bottom left of the map is part of the estuary of the River Fergus; zoom out to see the whole thing. The Fergus flows into the Shannon Estuary. The river is tidal as far as Clarecastle (formerly called Clare), a small town which was the port for Ennis, the capital of County Clare. Back in 1808, the indefatigable (if irascible) Hely Dutton undertook a Statistical Survey of the County of Clare for the Dublin Society (now the RDS). He was not very complimentary about the land-owners of the county, and that makes his survey, which is very readable, very funny: you can get it, free, online. He wrote of this area:

The river Fergus, the most considerable next to the Shannon, takes its rise in the barony of Corcomroe; and, after running through the lakes of Inchiquin, (containing three hundred acres,) Tedane, Dromore, Ballyally, and several others, and receiving the waters of several smaller streams, pursues its course through the town of Ennis, where it is augmented by the river Clareen, and, after forming a considerable and beautiful estuary, full of picturesque islands, unites with the Shannon at about ten miles distance. It is navigable for vessels of two hundred tons burden to Clare, a distance of about eight miles, and for small craft to Ennis. In spring tides the depth is about sixteen feet, and in neap tides about nine feet; at ebb a considerable rich muddy strand is left bare,
many parts of which might be added to those rich meadows and grazing grounds called corcasses.

It receives many mountain streams, and after heavy rains rises so considerably and rapidly, that large tracts of low meadows are frequently overflowed, and immense quantities of hay destroyed, belonging to those indolent farmers, who, though they have been annually punished for this neglect, still persist,
and who, I am confident, if a proposal was made to carry off the water, would grudge a small sum to effect it, and shift it on the shoulders of their neighbours.

THE pasture of this county possesses that variety necessary for rearing and fattening stock of every species and age. The low grounds on the rivers Shannon and Fergus, called corcasses, are equal to the fattening of the largest sized oxen; these fine grounds extend from Paradise to Limerick, an extent of upwards of twenty miles, following the course of the Shannon and Fergus, and are computed to contain upwards of 20,000 acres, some say only about J 0,000 ; they consist of a deep dark-coloured earth, generally over a blueish or black clay, or moory substratum, producing, from the greatest neglect, amongst the most luxuriant herbage, a great quantity of rushes and other pernicious weeds. Indeed the same complaint may be made of the lands of every grazier in Ireland; they are in general the most slovenly farmers, and none ever think of mowing thistles, nettles, fern, or even briars, except their wives, whose perquisite ashes are, get them cut for this purpose. These corcasses about thirty years since let for 20s. per acre, but now many are let at the enormous rent of 5l. merely for the purpose of fattening cattle, and sometimes much higher for meadow.

[…] the rich corcass […] supplies the merchants of Cork and Limerick with immense quantities of beef for the navy. […]

Multitudes of swine of all ages are fed on the corcasses along the Shannon and Fergus, and are always in high condition. Mr. Singleton, if I am well informed, who possesses large tracts of rich corcass ground, (upwards of 1000 acres,) buys store oxen of the largest size in May, feeds with hay in winter, and after a second summer’s grass sells them fat in Limerick, and this on ground, for which he could get seven guineas an acre for meadow. […]

You can see an arm of the estuary stretching eastward (to the left) from the Fergus towards the N18 (or M18). That is Latoon Creek: Latoon North and Latoon South are townlands situated respectively to the east and west of the road (which might have something to do with Latoon’s most recent claim to fame). Eccentricities of nomenclature are apparent too in the naming of the water body: the creek is the Latoon Creek but the river is the Ardsollus River according to the Ordnance Survey maps (you might want to look at the Historic Maps option), the River Rine or Quin River according to an angling website and the Rine according to the sign at the crossing.

Here is the old bridge, which may well be that shown on the OS Historic map, with the motorway bridge in the background.

The motorway bridge and the old bridge over Latoon Creek

The photo is taken from a third bridge, a middle-aged bridge, which carries the old road to Clarecastle and thence to Ennis. Dutton commented on the bridges of his time:

BRIDGES, Are in general in tolerable repair. Some of those on the rivers, that run into the Shannon and Fergus, are not built sufficiently high to admit flood-water at spring tides, and are usually made too near the Shannon. Pipes or gullets are usually very badly made, and highly dangerous, many remaining half open, unnoticed by conservators, and daily passed over by magistrates with unconcern, though they have a power of levying any sum under forty shillings for any sudden failure. I have seen many, that would not have required five shillings to repair if taken in time; but then, if this was done, there would not be a presentment got at the next assizes, of course a job would be lost.

The middle-aged bridge has one of those numbers that engineers find so useful in case their bridges wander off:

The old bridge is in poor condition.

Here is Latoon Creek downstream of the bridge.

The creek from the south bank

The creek from the north bank (on a different day)

Sea-weed (different varieties of algae) is another valuable manure, of which large quantities are used for potatoes, followed by a crop of barley or wheat; it is frequently brought up the Fergus by boats to Ennis, and carried into the country upwards of four miles; it costs about four guineas per acre ; the potatoes are usually planted first, and get this first covering, and by degrees, as the weed can be drawn, it is spread over this, and covered by a second spitting and shovelling; when they have the weed in time, they plant the potatoes on it at once.

KILNASOOLAGH, a parish, in the barony of BUNRATTY, county of CLARE, and province of MUNSTER, adjoining the post-town of Newmarket-on-Fergus, on the road from Ennis to Limerick; containing 1319 inhabitants. It comprises 5116 statute acres, as applotted under the tithe act; the land is of excellent quality and mostly under tillage, and the state of agriculture has of late been much improved, chiefly through the exertions of Sir Edw. O’Brien, Bart. Limestone of superior quality abounds, some of which admits of a high polish.

The Latoon river, which separates this parish from Quin on the north, is navigable to the bridge for lighters of 50 tons: sea manure is here landed, and corn is occasionally sent hence to Limerick. A cotton-manufactory was established a few years since, but was soon discontinued.

The Newmarket petty sessions are held every alternate Thursday at Rathfoland, on the southern border of the parish, immediately adjoining the town. Dromoland, the seat of Sir Edw. O’Brien, Bart., is a superb edifice in the castellated style, lately erected on the site of the ancient mansion, and surrounded by an extensive and richly wooded demesne, in which great improvements have recently been made. On an eminence in the deer-park is a turret that forms a conspicuous land mark in the navigation of the Fergus.

Lewis does not mention, and the 1840s Ordnance Survey map does not show, that there was a quay at Latoon bridge, but a quay there is. Presumably it was built after 1840. The the Clare County Library website mentions it in an article on the seaweed (sea manure) trade in the early twentieth century, when small (six-ton) lighters carried sea-manure from Coney Island to Latoon Quay. 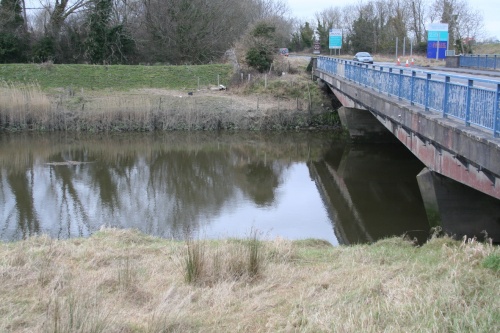 The north side of the creek, below all three bridges, seen from the south

The downstream face of the quay on the south bank

The quay from the north bank

The quay from the bridge

It looks as if the creek could have taken Lewis’s 50-ton lighters at appropriate states of the tide. But who owned such lighters? What did they carry? How were they propelled? How were they built? How did they operate?

Why and when was the quay built? And what was changed when the bridge was built over it? For the quay extends under the middle-aged bridge, but there seems to be concrete behind the stone.

Embankment to the old bridge seen under the middle-aged bridge

One river, many names; one quay, many bridges; one place, many mysteries.

4 responses to “The hidden quay of Latoon”