The Aaron Manby and the Shannon

… the public were much gratified, and astonished, at the exhibition of an Iron Steam Boat in the river Thames, between London and Battersea Bridges.[1]

The boat was the Aaron Manby, named after its builder, who operated the Horsley Iron Works at Tipton in Staffordshire. It was commissioned by Captain Charles Napier RN as the first of a fleet to operate on the Seine. The boat was sent, in pieces, to Rotherhithe on the Thames and reassembled there for trials before its voyage to France. 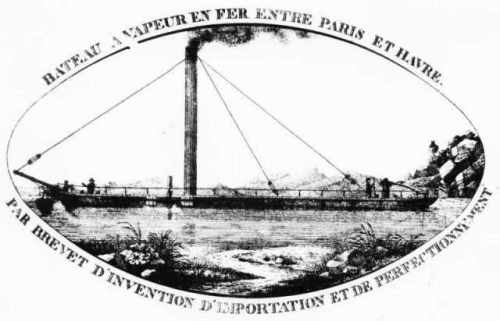 The Aaron Manby was by no means the first steam boat to be seen on the Thames. Europe’s first commercial steam boat service was that of Henry Bell’s Comet, which began in August 1812.[2] Bell used the boat to carry visitors from around the Clyde to his hotel and baths at Helensburgh but it also helped to attract them: indeed it has been described as a publicity stunt.[3]

By 1818 the Clyde had ten passenger steam boats and six goods-carriers, with two more being built.[4] But the new technology was not confined to the Clyde: steam boats were mobile capital and required little new infrastructure, so they were soon in use on other rivers and on short sea routes.[5] By the end of 1817, 40 steam boats had been built in Great Britain[6] and at least two in Ireland;[7] the greatest concentrations were on the Clyde and Thames estuaries.

The voyage of the Argyle (renamed Thames for service in London) is of Irish interest. Isaac Weld, who was born in Dublin in 1774, had had an adventurous life. At the age of 21, he sailed to Philadelphia and spent two years touring north America, where he met (amongst others) George Washington. He returned in 1797 “without entertaining the slightest wish to revisit the American continent” and later navigated the Lakes of Killarney in a boat he made from compressed brown paper.[11] In 1815 the Argyle visited Dublin en route from Clydeside to London; Weld persuaded Captain Dodd to take him and his wife, born Alexandra Hope, as the only passengers on the fifteen-day voyage to London.[12] Mrs Weld may have been the first European woman to undertake a sea voyage in a steam boat. Weld later, as Honorary Secretary of the Royal Dublin Society, helped to set up the programme of Statistical Surveys of Irish counties; he himself wrote the survey of County Roscommon, in which he pointed out that there were only three quays — Carrick-on-Shannon, Drumsna and Lough Allen (the Irish Mining Company’s coal quay) —on the upper Shannon.[13]

There was another early sea voyage in 1817, when the Lady of the Shannon, built by John Scott of Greenock[14] with one 20 hp engine by James Cook of Glasgow,[15] sailed for Kilrush and Limerick. It was the first steamer on the Shannon, carrying passengers on the estuary, and was owned by James Paterson of Kilrush. It had been built in 1816: its voyage to Ireland may have been deferred because of the bad weather that year, the “year without a summer”, especially as it had to face the exposed waters of the north and west coasts of Ireland.[16]

… 106 feet long, and 17 broad, and is propelled by a 30 horse engine, and Oldham’s revolving oars, the most perfect piece of mechanism that has ever yet been adopted in steam boats.[17]

These revolving oars were one of many designs for improved paddle-wheels proposed in the early days. John Oldham, their inventor, was a Dublin man: originally an engraver, he became a painter of miniatures but, although he had no engineering training, he was a highly inventive person who introduced innovations in many fields: a machine for reproducing miniatures, another for automatic consecutive numbering of banknotes, heating and ventilation systems for ships and buildings, a steam-powered plate-printing press, a paper-cutting machine, new methods of sizing dyeing and wetting paper, improvements in fuel supply to furnaces and the Oldham coupling.[18]

Oldham’s banknote numbering system was adopted by the Bank of Ireland, which appointed him as its engineer; much later, the Bank of England did the same. His banknote system had been backed by Charles Wye Williams, whose father was the secretary of the Bank of Ireland; Charles also provided financial backing for Oldham’s paddle-wheel inventions (which led eventually to the feathering paddle-wheel) and, as “patentee of the revolving oars”, Charles was on board the Aaron Manby for its trials, amongst “a large party of distinguished Naval Officers, Engineers, and Savants”.[19]

In the following year, Williams set up a steamship company to operate between Ireland and Britain. It was not the first such company, but it was the first to undertake, from the beginning, to operate all year round, not just in the summer; it was also to carry freight and livestock, not just rich passengers. Its City of Dublin made its first crossing of the Irish Sea on 20 March 1824.[20]

The company became the City of Dublin Steam Packet Company and, by 1826, it had taken over the rival Mersey Steam Company. Its capital was £250000; it owned 14 vessels and was able to provide a daily service (except, of course, on Sundays), sailing with the tide between Dublin and Liverpool. The company sought to involve merchants, shippers, graziers and exporters in the business: shareholders got free passages, free storage and reduced charges.[21]

The Horsley Iron Works built another iron steam boat for the Seine but French regulations required that it be sent there “in parts” and it was reconstructed at Charenton; Mr Manby established an iron works there and built two more steam boats for service on the Seine.[22]

In 1824 the Horsley works began building another iron steam boat which, like the Aaron Manby, was sent dismantled to a sea port for reassembly. In this case the port was Liverpool; the vessel was to cross the Irish Sea to Dublin and may thus have been the second iron steam boat to make a sea crossing.[23] It reached Ringsend in November 1826[24] and, via the Grand Canal and the Shannon, arrived in the canal harbour in Limerick in the beginning of February 1827:

… her arrival having been expected, vast numbers went out to meet her, and many to a considerable distance, so that when she entered the Shannon, opposite Plassy, her decks were nearly covered; but when she arrived at the upper lock, on the next line of the canal, the numbers that crowded on board were very great indeed, and we attribute it to the peculiar construction of the Boat that nothing unpleasant, even in the way of alarm for an upset, took place. She is what is technically called a Twin-Boat, and of course no danger of that nature need ever be apprehended.[25]

Unfortunately Grantham faced almost immediate competition from the Shannon Navigation Company, likewise operating a single steamer, the Mountaineer, on Lough Derg. It may be that Grantham’s operation was under-capitalised and that he was not a particularly good businessman. By December 1828 he was bankrupt[27] and his assets were offered for sale: they included the steamer, six fly boats, a flat at Portumna, the Killaloe to Limerick packet boat, the “materials of a store” at Killaloe and sacks, scales, weights and other items at Dublin, Portumna, Killaloe and Limerick.[28]

In May 1829, the (Dublin and Limerick) Inland Steam Navigation Company was set up “in immediate connection with, and under the same direction as the City of Dublin Steam Packet Company between Dublin and Limerick”. That “same direction” meant that it was run by Charles Wye Williams. The new company took over the assets of both existing operations, Grantham’s and the Shannon Navigation Company, and began a major programme of investment, including the assignment of a steamer to the Shannon estuary, a doubling of the number of steamers on Lough Derg[29] and the purchase of new “trade boats” (unpowered barges), amongst them the first iron vessels built by Lairds of Birkenhead.[30] Grantham was employed as manager in Limerick but did not stay long.

In 1833 the Inland Steam Navigation Company was merged into the City of Dublin Steam Packet Company.[31] The scale of the company’s operations, and its economic and political weight, provided the justification for Her late Victorian Majesty’s government to make a major investment on the Shannon in the 1840s, providing the basic infrastructure that defines the navigation to this day.[32]

[2] John Armstrong and David M Williams “The Steamboat, Safety and the State: government reaction to new technology in a period of laissez-faire” Chapter 3 of The Impact of Technological Change: the early steamship in Britain Research in Maritime History No 47, International Maritime Economic History Association, St John’s, Newfoundland 2011; originally published in Mariner’s Mirror LXXXIX No 2 2003 pp167–184

[4] George Dodd An Historical and Explanatory Dissertation on Steam-Engines and Steam-Packets; with the evidence in full given by the most eminent engineers, mechanists, and manufacturers, to the Select Committees of the House of Commons; together with the Committees’ reports, distinguishing and defining safe and unsafe steam-engines, and their proper management: comprising particulars of the fatal explosions of boilers at Norwich, Northumberland, Wells-street, and in America: concluding with a narrative, by Isaac Weld Esq, of the interesting voyage of the Thames steam-yacht, from Glasgow, in Scotland, to Dublin and London published for the author, London 1818

[6] Joshue Field in Appendix 1 to Fifth Report of the Select Committee on the Roads from London to Holyhead; and into the regulations for conveying his Majesty’s mails between London and Dublin, &c, &c. Steam Boats; &c Ordered, by The House of Commons, to be Printed, 12 June 1822 [417]

[9] Frank Burtt Cross-channel and Coastal Paddle Steamers Richard Tilling, London 1934; Field gave the date of 1816 for the move to the Seine

[12] “An Account of the First Steam Voyage on the British Seas, performed by the Thames steam-packet, from Glasgow to London, in the year 1815″ in Fraser’s Magazine for Town and Country September 1848 (in Vol XXXVIII July to December 1848 John W Parker, London)

[13] Isaac Weld Statistical Survey of the County of Roscommon, drawn up under the directions of the Royal Dublin Society Dublin 1832

[22] John Grantham (jnr) Iron, as a material for ship-building; being a communication to the Polytechnic Society of Liverpool Simpkin, Marshall and Co, London and others 1842

[25] Limerick Chronicle 3 February 1827. The plaque to Grantham in Killaloe Cathedral gives the wrong year, 1825, for Grantham’s introduction of steam to the Shannon