What Dublin newspapers wrote about during the Famine

As recorded in newspapers that were published in Dublin [Freeman’s Journal, Dublin Evening Mail] between 1 January 1845 and 31 December 1850 and that are available through the British Newspaper Archive. 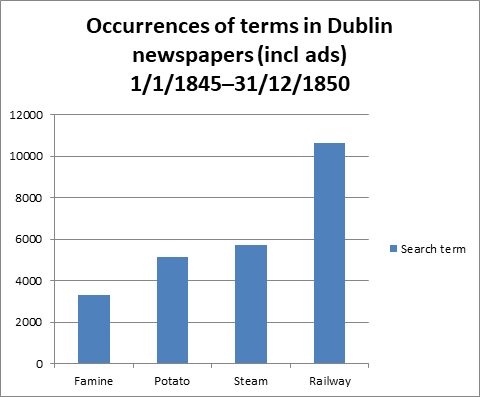 Count including ads and family notices 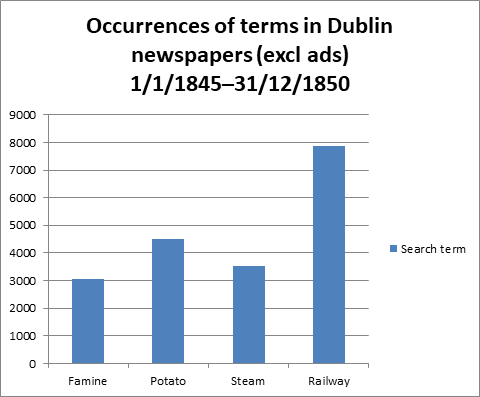 Those charts are a few years old; I must redo them. I suspect that the two terms I’ve used, “famine” and “potato”, don’t capture the full extent of famine reporting: I should perhaps add other terms (eg “distress”).

The Church of the Sacred Heart, Roscommon

So there you are, en route from Kingsbridge railway station in Dublin to Westport in Co Mayo. Or, as it might be, from Westport to Dublin. Either way, the journey takes at least three hours.

What you would like, of course, is to lengthen the journey by making a little stop along the way. In particular, you would like to stop in Roscommon to see the Church of the Sacred Heart. You could get off your train, visit the church and then catch the next train. You might even be able to do the same in Castlerea.

That is according to Senator Terry Leyden of Fianna Fáil. Now that the Shannon stopover, which hijacked transatlantic passengers en route to Dublin, is no more, the good Senator proposes an equivalent for the railways.

What to watch while listening to In C.

From the result of inquiries, which the Directors have caused to be made, into the system of Scotch railways, it is the intention of the Board to use animal power exclusively until the line is finished half way to Drogheda; and even when finished to Drogheda, it is intended that all the goods will be carried by horse power, and in the intermediate hours, when no steam train shall start for Drogheda; that a horse train shall run from Dublin to Malahide, and another from Malahide to Dublin, as this division of the line must be supplied with extra means for its own peculiar traffic, which will not be required on the rest of the line.

Report to the Proprietors of the Dublin and Drogheda Railway in The Railway Magazine; and Annals of Science No XXVI April 1838

Ewan Duffy’s chapter “Royal Canal bridges in Dublin”, in The Royal under the Railway: Ireland’s Royal Canal 1830–1899 [Railway & Canal Historical Society, Derby 2014], drew attention to the hitherto neglected effects of the Midland Great Western Railway’s ownership on the physical structures along the Royal Canal in Dublin.

Ewan’s latest venture is a Railway Archaeology of Ireland, which he is publishing online, at the rate of one chapter per week. The introduction and Chapter 1 are now available. The focus is on “railway-related architectural and engineering structures”, not on trains or rolling stock.

It is possible to sign up to an RSS feed and thus get notified automatically when new chapters appear.

To be sold by auction, on Friday, 8th September, 1905, at 12 o’clock, at the Graving Bank, Waterford, by directions of Messrs Robert McAlpine and Sons (owing to the completion of the Waterford and Rosslare Railway), 3 River Barges, also the Steam Barge, ‘Coolawn’. Carrying capacity, 25 to 40 tons.

All are in good working repair, and well found. Terms — Cash.

To be sold by auction, on Tuesday, 2nd October, 1906, at Twelve o’clock, at the Graving Bank, Waterford. By directions of Messrs Robert McAlpine and Soons, Railway Contractors, the steel steam barge ‘Coolawn’.

To carry from 40 to 45 tons on light draft of water; length about 58 feet, beam 13 feet 6 inches; fitted with Winch, Double Cylinder Engine, Screw Propeller with three blades, Boiler of the locomotive type, by Tangye; Two feed Tanks, to hold about 600 gallons each.

This Sale is well worthy the attention of contractors and others. She is in good working order, and can be inspected day previous to and morning of sale. Terms — Cash.

A train on the canal

Thanks to Ted McAvoy (via Andrew Waldron) for this photo. 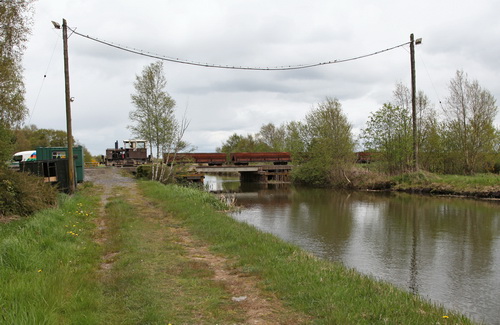 It shows a Bord na Mona ballast train crossing the Grand Canal just here. It’s on the BnM’s Derrygreenagh System and, if you follow the line northwards on the map, you’ll get to Derrygreenagh on the R400. I am told that the train was going to Ballybeg Bridge Quarry but I haven’t managed to locate that.

Thanks to AOD for alerting me to an article by Morgan McCloskey “O’Maras of Limerick and their overseas business” [PDF] from the Old Limerick Journal summer 2001. O’Maras were bacon and ham curers: according to Frank Prendergast “The Decline of Traditional Limerick Industries” in David Lee & Debbie Jacobs, eds Made in Limerick: History of industries, trade and commerce Volume 1 [Limerick Civic Trust, Limerick 2003]

James O’Mara of Toomevara in County Tipperary had established the business in a small house on Mungret Street in 1839. He started bacon curing in the basement but it became so successful that he had to move shortly afterwards to the premises in Roches Street, which they occupied until its closure in 1987.

The waterways interest arises from McCloskey’s having drawn on Patricia Lavelle James O’Mara: a staunch Sinn Féiner Dublin 1961, republished in 2011 under a slightly different title. Lavelle’s O’Mara, her father, was also covered here and was the grandson of the original James who set up the business in 1839. We are concerned with neither of the Jameses: Stephen, son of the first and father of the second, is the man of the moment. McCloskey says that Lavelle says that Stephen preferred to go to Dublin by boat rather than by rail and that she gives this description of one such trip:

Then the boat went through the heart of Ireland; and the country, with its hills and green fields, was spread before him in all its changing beauty for the best part of a couple of days. The steamer left Limerick and made its way up the Shannon, avoiding the rapids by various canals and locks.

After Killaloe it reached the wide waters of Lough Derg. The passengers had the run of the boat and could get a snack meal if they wished. Once, when grandfather was travelling this way, terrible squalls sprang up and the lake was very rough, but usually they could stop for a moment at Holy Island and see the ancient ruins there, and pass on by the wooded heights of the Tipperary shore, past Dromineer to Portumna, crossing and re-crossing the lake until they found anchorage in Shannon Harbour, as far north as Offaly.

There was a big hotel there owned by the Grand Canal Company, where they all stayed for the night and got to know one another; and feasted on chicken and bacon and cabbage followed by apple pie, and then sat round huge turf fires swopping stories or playing cards.

Next morning the canal boat awaited them, gay with its overhead canopy to protect passengers from the heat of the sun or from inclement weather. The passengers sat in two long rows, back to back, and gazed out across the fields as the paddle lazily churned up the turbid waters and the boat made leisurely progress along the canal. The monotony was broken once in a while by the excitement of passing through a lock.

The problem with this romantic account is that, as presented, it’s rubbish.

Stephen O’Mara was born in 1844 and began work in the family business in 1860. The passenger boat service between Limerick and Killaloe ceased in 1848, when the railway reached Limerick (though there were occasional special excursions after that).

The service was by horse-drawn boat, not by steamer; though there had been some attempts at running steamers, the Limerick boats did not go beyond Killaloe, whence larger steamers ran to Portumna or, later, to Shannon Harbour and places further north.

Scheduled passenger services did not “stop for a moment” at Holy Island, which was off the main route to Portumna.

The canal hotel at Shannon Harbour effectively ceased operating as such in 1847, according to Ruth Delany The Grand Canal of Ireland David and Charles, Newton Abbot 1973.

The canal passage boats did not have canopies, the passengers sat facing each other rather than back to back and the boats were horse-drawn rather than paddle-driven. Furthermore, the service ceased in 1852.

I cannot explain the extent of the inaccuracies, but perhaps Lavelle’s account should have been attributed to the elder James rather than to his son Stephen. I would be glad to hear from anyone who can cast light on this; please leave a Comment below.

It is proposed that six cwt should travel on the Rail-road between this City and Waterford, ten miles an hour, urged by the propelling and locomotive engines. Thus, on the sixth day, the heaviest goods will reach London from Limerick; the fourth, Liverpool; and the third, Bristol.

In case the navigation of the Suir should be found inapplicable, an extension of the Railway to Dunmore is intended.

The undermentioned are expected to form the Committee, some of whom have already signified their intention to that effect:—

Nowadays, the average duration of the eight daily trains between Limerick and Waterford is four hours and five minutes, for say eighty miles, so speeds have doubled since the 1825 proposals were made.

Tyler Cowen of Marginal Revolution quotes an interesting extract today from a new book on the history of India:

…the most important technological change for the transportation of heavy goods in nineteenth-century India was not the arrival of the quick, expensive railway: it was the move from pack animals to carts pulled by two or four beasts in the first half of the century.  This was the process historian Amalendu Guha calls ‘the bullock cart revolution’.  Throughout the 1860s and 1870s railways found it impossible to compete not only with bullock carts, but also with human-powered river transport.  Rowing boats along the Ganges and Jamuna won a price war with the railways over the cost of transporting heavy goods.  Vessels powered by human beings were able to undercut steam vessels elsewhere.

There is a description of the book (which I have now ordered) here.

How did transport in Ireland compare? In the first half of the century, road transport using Scotch carts dominated carrying. Within about 55 miles of Dublin, eastward of Mullingar on the Royal and Tullamore on the Grand, canal carriers did little business except in the heaviest goods: the Scotch carts, each drawn by one horse and carrying about one ton, dominated the trade. But the Scotch carts relied on there being good roads, which in many cases required government intervention of one sort or another.

But rowing boats do not seem to have been serious contenders on Irish inland waterways. They might have been used on the Shannon, to tow canal boats, and the idea was mooted, but nothing seems to have come of it. The problem, I suspect, was that there was little or no trade: when it did arrive, it did so because the steamers created it. And the capital cost of a large pulling boat might have been beyond the means of a small-scale entrepreneur who might have been able to afford a cart.

On the other hand, vessels powered by sail retained certain markets, including traffic across the Irish Sea, until the middle of the twentieth century.

Much about Irish transport history remains unclear to me.