These notes on boating from Lough Corrib to Ross Lake have been kindly supplied by Kyran O’Gorman [© March 2015], who owns the copyright, and are used here with his permission. The photos are by Declan Maher [(c) 2012]; some are looking down towards Lough Corrib, the opposite direction to that in Kyran’s notes.

None of us accepts any liability for any consequences of anyone’s making any use of this information. Conditions can change and boaters should check for hazards and assess risks for themselves. We make no claims about rights to navigate.

1. Before you set out on this trip, I would strongly recommend that you study the Google maps satellite photos of the area in considerable detail.

2. Suitable craft: I have completed this trip in an open or Canadian canoe and a small fibreglass dayboat. Light and manoeuvrable and under 18’ should be OK. If the reeds and vegetation were trimmed much larger craft could transit.

Travelling along the southern shore of Moycullen bay about 50 yards off the edge of the reeds, you will see a distinctive line of trees going away from you. This is the line of trees on the western bank of the canal; the eastern bank is bog devoid of growth. Just beyond (west) of where the tree line hits the lakeshore, the reeds distinctively change colour to a lighter green; that’s the entrance to the passage. Entering the passage heading SW and following as it swings left until you are heading SE, you arrive in a small clear pool. A very sharp right to SW and the passage leads directly into the canal. 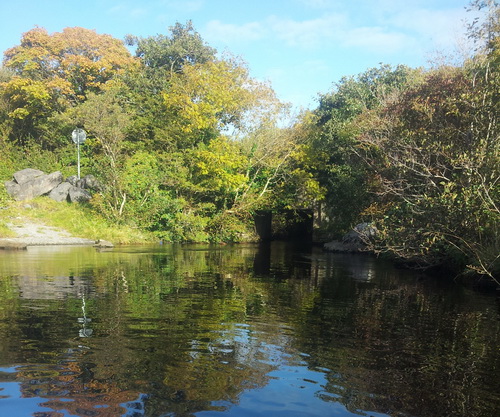 This canal is free of dangers with the sole exception of a large rock in the middle of the canal about 20–40 yards north of the overhead power lines. As the water is peaty you will not see this rock.

The entrance to Ballyquirke Lough is under a road bridge; the deepest water is in the middle and in flood there is a significant current. Headroom is 4–5 feet. There is a good place to beach on the right after the bridge. 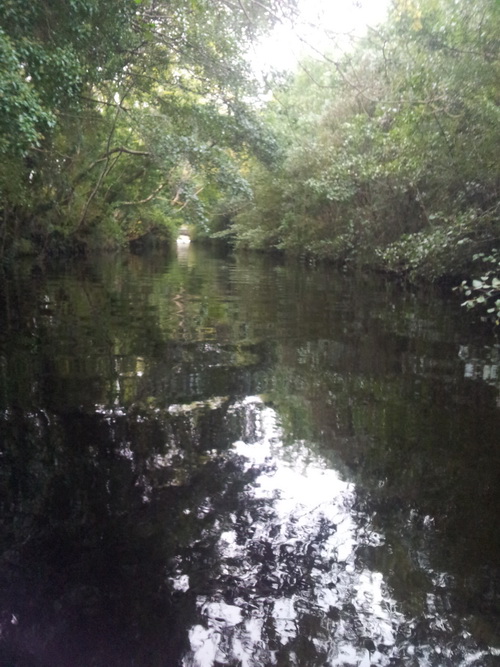 Ballyquirke Lough itself is relatively free of dangers and is well worth a tour.

Finding and getting into the next canal is the most difficult part of this trip; it’s all plain sailing thereafter. The canal entrance is WSW (about 250° magnetic) from the road bridge behind you. However, when you cruise up and down the western shore, the vegetation appears uniformly dense and impenetrable. In fact the trees on the Northern side of the canal are significantly taller than those on the southern, but that can be hard to see.

The reeds are strong and dense and care is required. Energetic poling is needed to penetrate the reeds sufficiently to discover if you have hit the right spot. It is not possible to do this under engine. I used a fold-up anchor (chain removed) as a grappling iron to throw and pull myself through these dense reeds. Sometimes several attempts are required as visibility in the reeds is quite limited. This can be quite tiring.

In the canal, the water is good and the undergrowth is not an obstacle, but the bowman will get a few briars in the face so take care. The canal passes under two road bridges; there is a landing stage at the second and steps up to the road (heavily overgrown). Moycullen Crystal is on your right.

You emerge into a beautiful, almost round lake with fishing positions all around. If you land on the left (south) bank and walk south 20 yards you are standing on the old Galway–Clifden railway line.

The exit is almost straight ahead (WNW) and leads into a second, smaller lake.

The exit from this lake is almost due west of the entrance and can be overgrown, but perseverance will be rewarded. This canal swings left and passes under a still-used railway bridge, now a farm access road.

The third Downs lake is oblong and free of dangers. The next exit is in the NE corner of this lake. A very short canal and you are in another smaller oblong lake; the exit is to the west.

As you emerge into the fifth Downs lake, look SW and that is the back of Drimcong House, once one of Galway’s finest dining establishments.

Turning right, head up into the top (northernmost) point of this lake and the next exit appears, running NNW. This canal swings around to NNE before emerging into a sixth lake. Cross this lake from south to north and the exit appears, the canal heading NW. After a short distance this canal swings north and you see a small lake ahead. Beware; there is a very large rock in the canal and the passage to Ross Lake is sharp left just before the small lake ahead of you.

As you travel along this canal there is an interesting, cut-stone arch like a culvert in the embankment on your left. You pass under a road bridge (good clearance) and see a lovely old red-brick house on your left. Another 30 yards and you emerge into the SE corner of Ross Lake.

A short distance west of the entrance point is a river mouth. The trees meet overhead in a most beautiful manner.

In the NE corner there is the now-derelict Cloonabinnia hotel. If you land here and walk out onto the road, turn left and left again at the crossroads, and after ¼ mile McEvilly’s pub is the white building on your right. A good pint and craic; the locals would not believe that we had come from the Corrib by boat.

At the top of the northern bay there is a big drain heading NW leading to a small round lake in the woods. The forest is littered with beautifully eroded rocks. Land and walk westward a little before turning north and the main road is easily reached. Turn right and after a bit the white building on your left is McEvilly’s.

The historic Ross House is at the western end of Ross Lake. Once a Martin family residence, in more recent times it was the home of Claude Chevasse, a rather eccentric and colourful Scotsman.

I read that one of the larger islands is a Crannog.

4 responses to “The Ballycuirke Canal: Lough Corrib to Ross Lake”