I haven’t got photos of all Waterways Ireland vessels (and I have none whatsoever from the Bann), so I’ll add to this page as I get more photos. In the meantime ….

Added some pics of the Inishee before and after its refit at Shannon Sailing in Dromineer.

Joe Carroll has photos of some WI (and other) workboats on his site on this and other pages.

Thanks to Tina from Wasserrausch for a photo of the Inish Davar with two other boats alongside.

I’ve added some extra boats at the bottom of the page under Shannon: engineering.

Tina from Wasserrausch has very kindly supplied photos of some of the workboats I hadn’t covered. Her website has material on Irish waterways in both English and German, and lots of photos. The copyright in those used here is owned by Wasserrausch and I am very grateful to Tina for permitting me to usse them.

Waterways Ireland have kindly supplied photos of their new North Shannon workboat Inis Cealtra; again, the copyright remains with Waterways Ireland. I learned from their press release that they have over sixty vessels altogether, so clearly this page has a long way to go! If you are really, really interested in this vessel, see my page of detailed photos here.

This is the modern type of canal weed-cutting boat, with a conveyor belt to carry the cut weed on to the vessel. It also has a bow-thruster.

Here is the stern of the boat.

Note the twin hydraulically-driven screws, which apparently don’t pick up much detritus but can be tilted up to be cleared if necessary.

Here’s another canal work-boat, this one seen on the Barrow Line of the Grand Canal, just below the lock at Monasterevan. I have no idea what it does or how it does it. 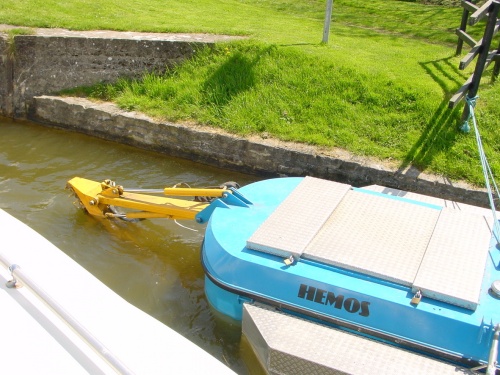 This is a slightly older design, seen at Hazelhatch.

These much-older models look like pond-skaters or other beetles when they’re working. We passed them at lunchtime, between Lowtown and Ticknevin, in 2004.

Here a tracked excavator is being used to dredge the canal above Tullamore, dropping the material into a small barge.

Here are two of those small barges together.

Waterways Ireland does own several full-size barges, notably ex-Grand Canal Company (GCC) motor barges, but doesn’t use them. Some are stored under water in Tullamore but the “carpenter’s boat” is afloat in the Grand Canal Dock at Ringsend.

I have only one photo of workboats on the Barrow, and it’s some years old, but it did capture three workboats at the Waterways Ireland depot at Fenniscourt.

The vessel on the left is, I think, an inspection launch. The one in the middle is ex-GCC motor barge 77M with its bow cut down and a Priestman “dredger” mounted on it; it seems not to have been used for some years. The boat on the right is a workboat a bit like WB2 (qv): a platform with a large engine.

Tina of Wasserrausch has very kindly supplied these photos. 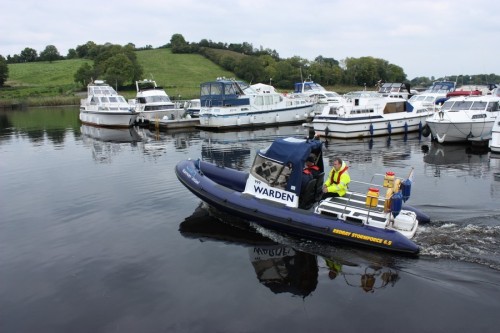 Here are a WI rib and the inspection launch Eonish (often parked at Leitrim, at the western end of the Shannon–Erne Waterway) escorting a pontoon with ET on it. Or is it a tree-eating dinosaur? 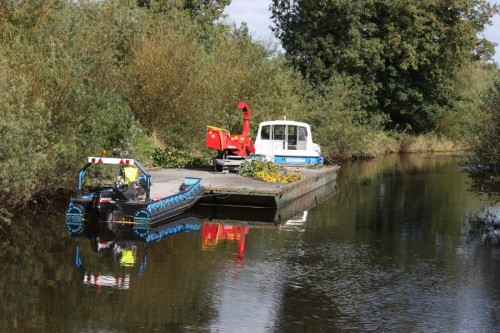 Here is the Erne-based workboat Inish Davar (which I think was the most recent addition to the fleet before the Inis Cealtra). “Inis” is the Irish for island, by the way, and is often anglicised as “Inish”: Inis Cealtra is also called Holy Island, and it’s on Lough Derg, while Inish Davar is on Lower Lough Erne.

Inish Davar, a Pioner and another workboat at Portora Lock on Lough Erne

The Inspector of Navigation and his wardens have a small fleet of boats. The Inishee is moored at Athlone Lock, near the Inspector’s office.

Here it is passing down through Athlone Lock to inspect a cruiser that had grounded downriver.

And here it is ashore at Shannon Sailing in Dromineer.

This RIB is kept in the (former) Canal Stores at Dromineer on Lough Derg. 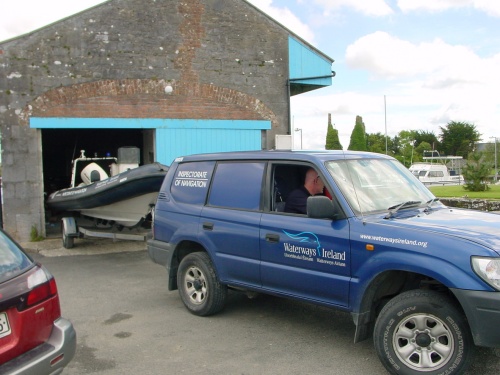 And here’s a RIB at Terryglass, also on Lough Derg.

On the North Shannon, Waterways Ireland’s main vessel has been the Fox (113B), a former “bye-trader” or “hack boat” on the Grand Canal: that is, a boat not owned by the Grand Canal Company itself. This is the second Fox, which was the oldest boat in WI’s maintenance fleet; it is now with the scouts at Lanesborough.

Waterways Ireland’s latest vessel (at time of writing: June 2009) is the Inis Cealtra. For people who are really interested, I have a page of photos of details here. 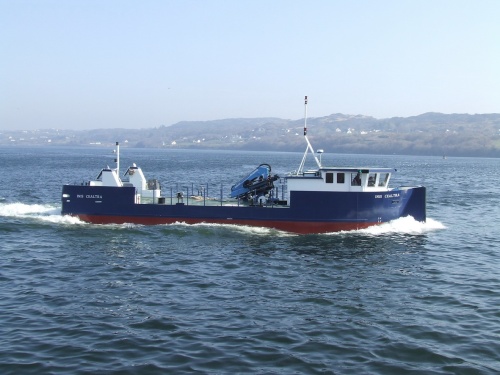 Inis Cealtra was designed and built to Waterways Ireland’s specification by Mooney Boats of Killybegs and their naval architects, Marine Design International. The vessel is constructed and certified to the meet the regulatory requirements of the Marine Survey Office (Dept of Transport).

The boat travelled down the west coast and entered the Shannon via the estuary, the sea lock in Limerick and Ardnacrusha lock.

Inis Cealtra was built to be able to fit through Ardnacrusha (with care) so she is 22m X 5.6m, with a draught of 0.98m. It has four ballast tanks to allow trim to be adjusted. Low air draught was set to cater for all but extreme high water levels. Power is from twin Caterpillar C3056TA engines: according to the Maritime Journal they develop 185hp at 2,100rpm; conventional shafts and propellers provide a cruising speed of 7 knots and a bollard pull of 3.5 tons. The fuel tanks hold 7400 litres.

The boat has an 11m reach Guerra deck crane (20.9 t/m) with Kranskan marine crane safety indicator, twin spud-legs, a hydraulic bow thruster and a Caterpillar 30 kVA generator. A 270 litre air compressor powers air tools in the workshop, which is below the deck. The boat has a toilet and shower; the deckhouse has a kitchen and dining room as well as the wheelhouse. 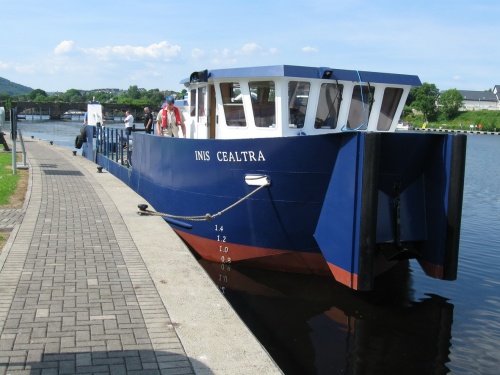 I am grateful to Tina of Wasserrausch for photos of a weed boat at Lecarrow. It is at the end of a short canal off the Shannon and, almost uniquely for the Shannon, does get weed growth in summer: indeed some boat-hire firms tell their customers not to go there during August. 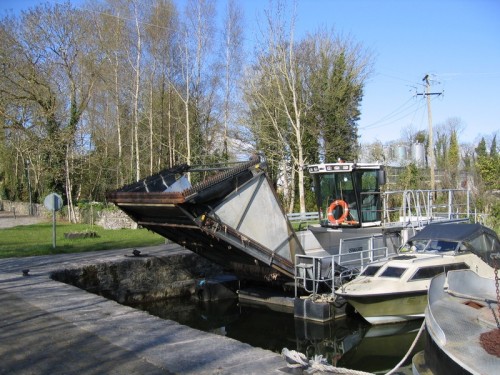 Here is a Berky weed-boat seen in Athlone in July 2010.

The largest vessel in the Waterways Ireland fleet is the Coill-an-Eo, which has been seen everywhere from Limerick to Lanesborough. Here it is installing new pontoon moorings in Shannonbridge in the middle of winter.

Here it is in Limerick …

… and bows on in Shannonbridge …

… and draining the water from its Pioner Multi. 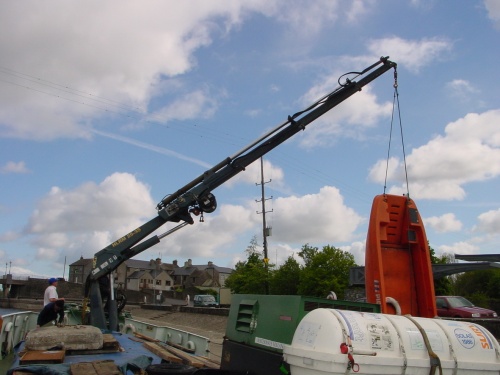 Here’s the view from the bridge. 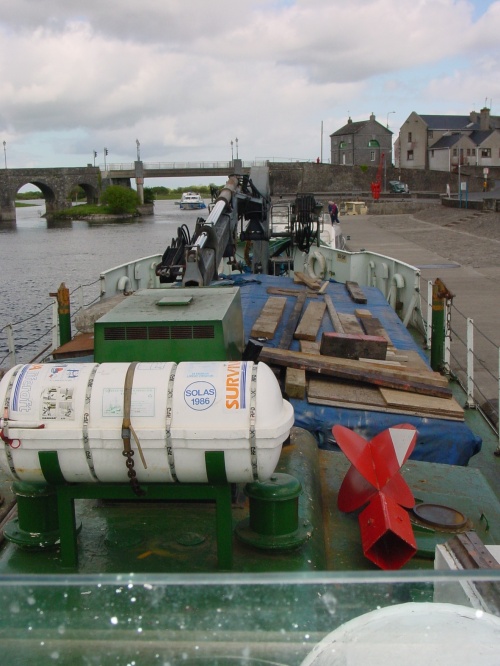 The view from the bridge

Coill-an-Eo is often accompanied by the workboat WB2, seen here tied alongside.

WB2 has been painted since then:

WB2 was working with this pontoon-mounted piledriver, which had been towed to Dromineer by Coill-an-Eo.

Here is WB2 in Athlone … 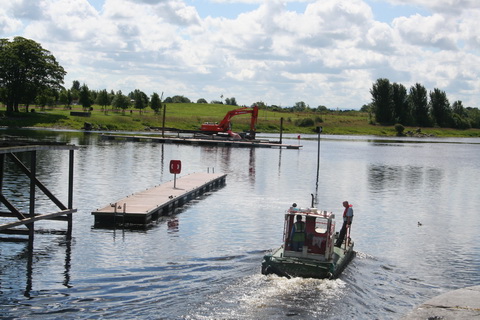 … and here’s that pontoon-mounted excavator seen from downriver.

Here is Coill-an-Eo in Limerick with what I call the Swiss Army Knife: it has lots of gadgets, including one for taking stones out of horses’ hooves. WI now has two of them; I’d like to photograph them together some time, but I hate to think what their mating rituals are like: arms everywhere, I should think.

Coill-an-Eo and the Swiss Army Knife

I’m told that the Swiss Army Knife can haul itself out of the water and put itself on the back of a truck. I wouldn’t be surprised if it could make itself a cup of tea once it got there. In the next photo, I think it’s asleep. 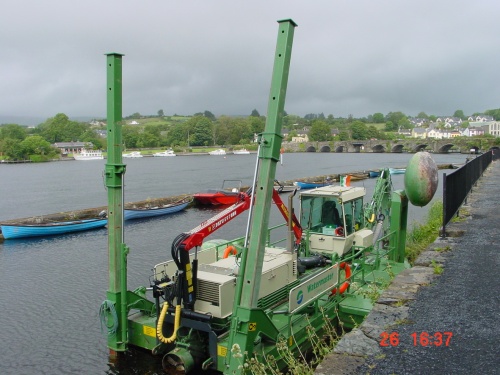 The Swiss Army Knife at rest

Here it is in Killaloe, about to eat whatever it has captured.

The Swiss Army Knife in Killaloe 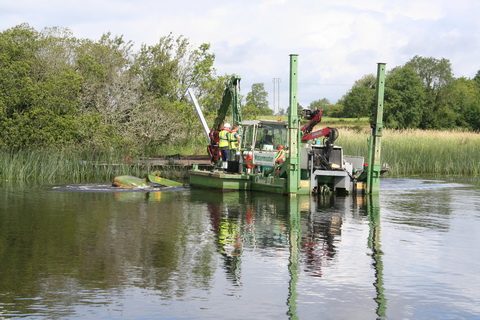 It was being attended by this fast little workboat, which has flashing lights and everything: I suppose it’s the modern equivalent of WB2.

Have you ever visited the boat-sales website ApolloDuck? And have you wondered why it bears that name? It’s called after a Waterways Ireland workboat, and here it is, with several pontoons, on the Shannon–Erne Waterway.

But no, I’m afraid I don’t know why the boat bears that name.

Finally, I think that both of the following photos are of the workboat Ferrinch. The first was taken at the WI base at Roosky, but before Waterways Ireland took over; the second was taken on the Shannon–Erne Waterway. 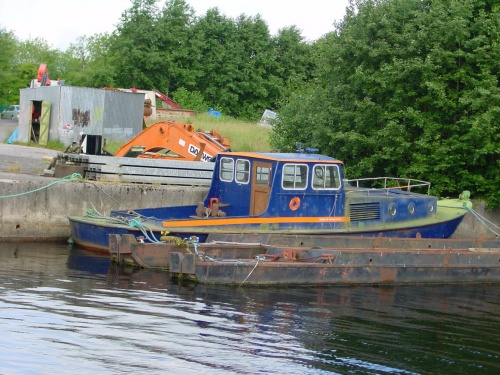 Here is a small platform-type vessel in Munster Harbour.

And this boat was in the compound at Munster Harbour on the same day. I don’t know whether it’s one of the 60+ fleet; I’m grasping at straws here.

The Pioner Multi above was seen at Tarmonbarry, so presumably it’s part of the North Shannon fleet whereas the Coill-an-Eo Multi belongs to the South Shannon. Here is the Multi in action with a pontoon and a small white Pioner. Does that lot count as three of the 60+ WI fleet? You can see more details of what they were doing here. 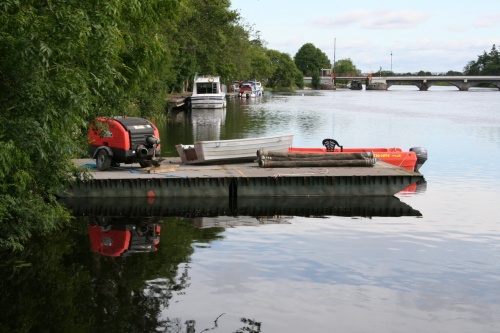 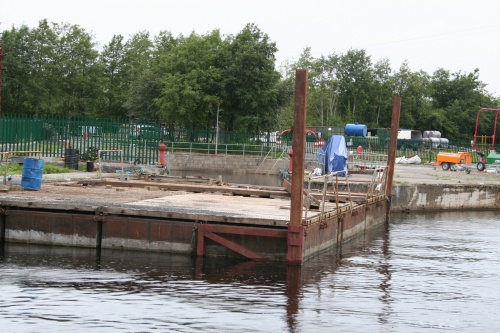 Large WI pontoon outside the dry dock at Roosky (July 2009)

Here are three WI vessels side by side in Athlone in July 2009. On the inside is the Coill-an-Eo and on the outside is a Pioner Multi. But what’s that in between? It’s not WB2, which was parked ahead of the Coill-an-Eo at the time. Note that this one has two windows along each side whereas WB2 has only one. So this is a workboat like WB2, but I don’t know its name. Could it be WB1? I presume there is, or was, a WB1!

Here is work in progress below Clarendon Lock on the River Boyle (on the way to Lough Key) in August 2018.

If you can correct, clarify or supplement anything I’ve written here, or if you can suggest where other WI boats might be spotted, do please leave a Comment below.

If you want to be told when new pages are added to this site, or when significant amendments are made, do please subscribe to the RSS feed on the front page. It doesn’t cost you anything; it just means you’ll get a short message in your RSS reader, and can decide for yourself whether you want to visit the site to read the whole of the new page.