The Lombardstown to Mallow Canal

Update May 2013: I’ve divided this very long page into four pages. Click on the requisite number below the “Like this page” stuff at the end of the text.
Updates January and April 2012: this page has been improved with the addition of extracts from OSI historic maps (by kind permission) and of photos and information from Richard Norton, for which I am most grateful.

From 1755 onwards, the Commissioners of Inland Navigation were able to dispense large grants, and several landowners in counties Cork and Waterford asked for funding to make the (Munster) River Blackwater navigable from the Duhallow coalfields, near Kanturk, to the port of Youghal.

William Ockenden began work in 1756, but didn’t start either at the collieries end or at Cappoquin (a town on the Blackwater to which the river was already navigable with the tide). Ockenden died in 1761 and was replaced by Thomas Fruin. And when the parliament cut off funding in 1763, after £11,000 of public money had been spent on the colliery and navigation, the result was an isolated 3.5-mile stretch of canal, running from Pallas, near Lombardstown, to near the town of Mallow.

On the Ordnance Survey map (of around 1840) you can see the thin blue line north of the river, almost touching it in a couple of places. Note that the map was made many years after the “old canal” (as it terms it) was closed. It does not show the positions of the locks.

As the Rev Horatio Townsend wrote in 1810:

CANALS [in County Cork] at present cannot be so properly called a subject of enquiry, as of speculation. Some have been talked of, none executed, and one only begun. […] The professed object was, I presume, a communication between Mallow and the Duhallow collieries; the real one, perhaps, had more relation to private than to public emolument. What was the full object of the plan, or whether it was intended to go further, it seems now useless to inquire, as the amount of execution fell greatly short even of this object. […] The canal was formed upon much too large a scale, an error but of recent discovery, though apparently so obvious to common understanding.

Samuel Lewis wrote in his Topographical Dictionary in 1837:

About 40 years since, about 3½ miles of a line of canal, intended to connect the Duhallow collieries with the sea, was cut and may still be traced adjoining the road to Kanturk, thence called the “navigation road.”

The canal closed in 1786, after £11,000 of public money had been spent on the colliery and navigation, but mining at Duhallow continued for many years afterwards. Incidentally, although it is called the Mallow–Lombardstown Canal, the waterway ddn’t go through Lombardstown, which is slightly to the south of the N72. 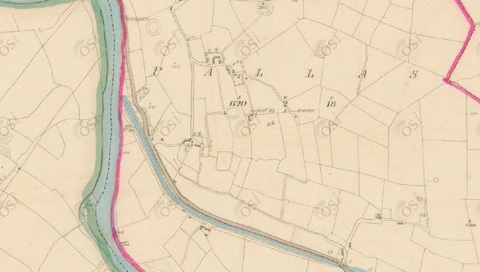 Where the canal left the river at Pallas

Much of the Mallow–Lombardstown Canal runs along the north side of the N72 road from Mallow to Killarney. It originally had two locks. The upstream lock at Pallas fed the canal from the river, and has been lost to roadworks. The surviving lock at Longueville, at 47m by 6.62m, was much larger than locks on the Grand Canal, although it has now been shortened by an underpass. Nonetheless, the stonework was tidied up and is in good condition. It is in the grounds of Longueville House Hotel but can be seen from the road.

The Mallow end of the canal was said to have been north of the racecourse; Richard Norton (see Comments below) has found its possible location.

37 responses to “The Lombardstown to Mallow Canal”