Marl from the bed of Lough Derg was used as a fertiliser in the nineteenth century. Arthur Young wrote about it in 1780 in his A Tour in Ireland, with General Observations on the Present State of that Kingdom, made in the Years 1776, 1777, and 1778, and brought down to the end of 1779 printed by James Williams for Messrs Whitestone, Sleater, Sheppard, Williams, Burnet, Wilson, Jenkin, Wogan, Vallance, White, Beatty, Byrn and Burton [Dublin, 1780]:

The only manure used besides dung is the shelly marl, dredged up from the bottom of the Shannon. Mr Head’s grandfather was the first who introduced that method of getting at it by bringing men from Dublin used to raising ballast. It proved so profitable, that the use has much increased since.

It lies irregularly in banks, from 100 to 200 yards from the shore, and under 10 or 12 feet of water in summer which is the only time they can get it. The price of raising it is from 1s to 2s according to circumstances, besides finding boat, ropes, and all tackle; a boat contains 60 bushels, and requires 5 men. They land it on a quay, from whence it is taken in sledge carts to some distance for drying, nor is it dry enough for carting away till the year following. Some think it worth carrying one mile, and even two. The common people do not lay on more than four or five boat loads to an acre, but Mr Head always ten, and the whole expense he calculates at 40s. Much bad land has been reclaimed by it, and to great profit. All their dung is used for potatoes.

Hely Dutton, in his Statistical Survey of the County of Clare (1808), says:

In the mountains near Skarriff they lime and marl, but not with the spirit they do near Broadford. 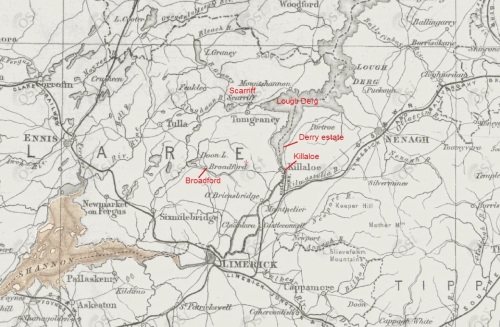 Scarriff, or Scariff, is up a short length of river from Lough Derg, and it seems that both lime and marl (Hely Dutton uses both spellings, marl and marle) were available, which suggests that marl was not seen as an inferior substitute for lime.

Of Broadford (a small distance from the Shannon) and Killaloe, he writes:

Astonishing improvements have been made in the neighbourhood of Killaloe, especially in the mountains between that and Broadford, by means of marle, inexhaustible quantities of which may be procured in the Shannon. It is raised by boats, and drawn into heaps on the shore, where it generally lies until dry, and at leisure times is drawn to the land; about fifty loads are used to the acre.

The course of crops after this manure is usually; 1st, potatoes; 2nd, barley; 3rd, oats; 4th, oats; then manure again, and pursue nearly the same wretched course: some variation does occur; they sometimes sow a crop of wheat, and perhaps two of potatoes in succession, but in general the first is the favourite course, perhaps with the addition of one or two crops of oats. An ancestor of Mr Head of Derry was the first, who introduced the practice of dredging for it in deep water. The effects of this valuable manure in the production of the finest crops, added to the beauty of the undulating surface, and fine views of the Shannon and opposite country, render the ride from Broadford to Killaloe highly interesting. Marle lias been used with great effect near Kilnooney, where it is raised in the valley near the old church, but it is not esteemed so much as that raised in the Shannon; it has also been raised between Feacle and Loughgraney in the barony of Tullagh. It is probable it may be found in many other places, but this is not the county for agricultural exertions.

While marl was dug up in many places, I do not know of others in which it was dredged in deep water. Here is a section of the Admiralty chart showing the south end of Lough Derg, with ml showing marl and with the depths in feet. Derry Point and Derry Castle, on Mr Head’s estate, are on the east side of the lake; Killaloe is just off the bottom of the chart.

The marl trade was important enough to have its own dock in Killaloe. 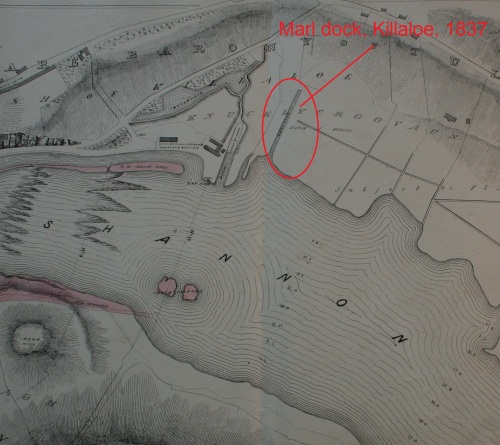 The marl dock in Killaloe 1837

When Mr Head of Derry put his estate up for sale in 1840, he mentioned the supply of marl, for use as manure (ie fertiliser)  as one of its main benefits. Here is an extract from his ad.

So how important was the trade? How was it organised? Who owned and manned the boats? How was the dredging done? What was the value of the trade? How many people worked in it? Why did it end? Were similar methods used elsewhere in Ireland or in the rest of the UK?

I have no idea and, tempting though the prospect might be, I can’t spend much time investigating it at the moment. I place these notes here in case anyone else is investigating the subject and might either find this information useful or be able to add to what I’ve so far found.