The inclusion of that article was not why I rushed to buy the copy of the Journal that came up for sale recently. Nor was it the second article, “Field Experiments, 1929”. But the third — “Arterial Drainage with some reference to the River Barrow”, by J Chaloner Smith, DSc, MInstCEI, Engineer in Charge, Barrow Drainage, for the Commissioners of Public Works — seemed likely to be of interest.

Both the Shuttleworth Commission and the 1922 Free State inquiry highlighted the many defects of the [Barrow] navigation but no action was taken to remedy them and matters were made considerably worse in 1935 when a drainage scheme on the upper river greatly increased the problem of silting in the lateral canals and led to an even greater current in certain sections of the river. The Grand Canal Company eventually accepted £18,000 compensation and put a more powerful steamer on the river with winches on the shore at the places where the current was most severe, but nothing could be done to prevent silting.

Chaloner Smith’s article is about that very drainage scheme. The title verso page of the Journal says:

Any of the articles in this Journal may be reproduced IN ANY REGISTERED NEWSPAPER OR PUBLIC PERIODICAL without special permission, provided that the source is acknowledged in each case.

This website is not a registered newspaper, but I’ll pretend it’s a public periodical and acknowledge the Department of Agriculture Journal as the source of the text and photos provided here. The article is quite short, and very readable.

The Barrow Navigation runs from Athy, in Co Kildare, down to a sea-lock at St Mullins. From there boats can go downriver, on the tidal section of the Barrow, then up the Nore to Inistiogue or down through New Ross to join the Suir near Cheekpoint.

Although Athy is the head of the Barrow Navigation, there was traffic on the river further upstream, including turf from the bogs around the Finnery River. The Ordnance Survey map of ~1900 even shows a lock in the mill weir above the main bridge (Crom-a-boo Bridge) in Athy. 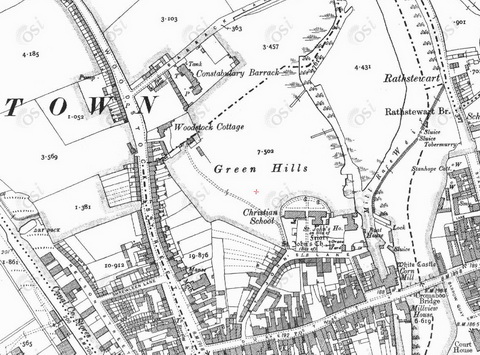 Athy with canal on the left, River Barrow on the right

In August 1897 the indefatigable F E Prothero (Supplement to A NEW OARSMAN’S GUIDE. The Suir — The Nore — The Barrow — The Boyne by F E Prothero Esq, Rear-Commodore, Cruising Club Offices, London 1898) canoed up the Barrow from New Ross, reaching Athy in four days, then spent another day taking the canal up to Monasterevan and the Mountmellick Line from there to Mountmellick. Then he canoed down the Barrow back to Athy. He put the distance at 28¾ miles, which took him about 8½ hours. Here is his description of the Barrow between Mountmellick and Athy:

The Barrow here, and most of the way to Portarlington, is small (15 or 16 feet across at Barranagh’s Bridge), and in several places rather overgrown with bushes; but there was plenty of water, of a deep coffee colour, and a strong stream, though the sharp corners prevented any great speed. Below Portarlington it spreads out, but varies exceedingly in breadth; and, after Monasterevan, is everywhere a large river, though frequently split up by islands; and there was some trouble with rushes. […]

Now for Chaloner Smith’s photos of the drainage work. Captions are original, but in some cases I had to type them in because they were chopped from the scans. I have arranged the photos from upstream to downstream, but I am not entirely certain of some of the locations and would welcome correction.

Millgrove is to the north of both Portarlington and Monasterevin. It is on the River Figile, which flows into the Barrow just above Pass Bridge at Monasterevan. 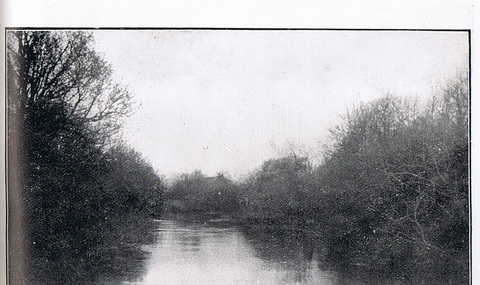 Pass Bridge is the old bridge upstream of the railway bridge and aqueduct.

Sallow Island is downstream of the town. 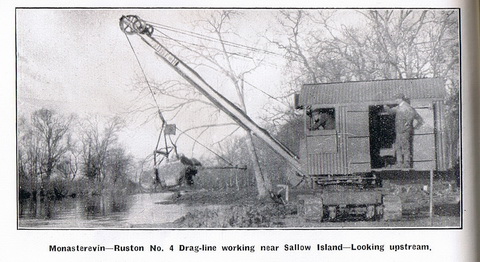 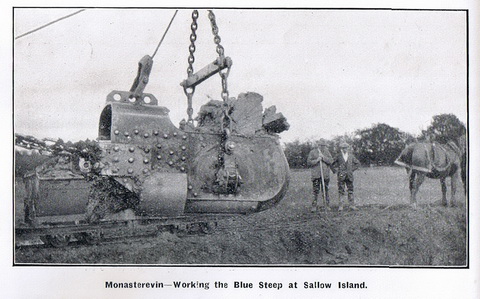 I thnk Ballymanus is downstream of Vicarstown; further information welcome. 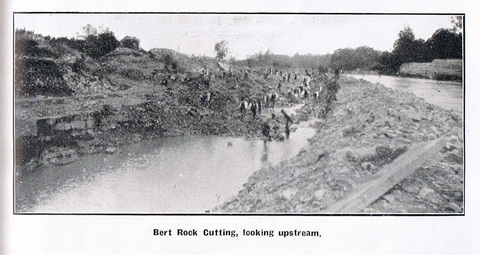 This is the site of a former church, graveyard and holy well, between Bert and Cardington.

In 2011 the National Ploughing Championships will be held again at the Cardington estate, just north of Athy, between the River Barrow and the Barrow Line of the Grand Canal.

Near Cardington House — No. 6 II Ruston in Boulder Clay. 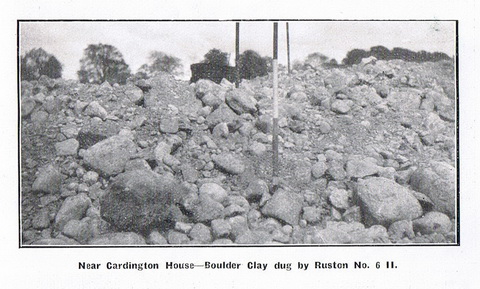 Milford Weir (below Carlow) before Clearing

12 responses to “Draining the Barrow”