This photo of Guinness Liffey barges is from Ireland: Industrial and Agricultural edited by William P Coyne and published by Browne and Nolan Limited (Dublin, Cork, Belfast) for the Department of Agriculture and Technical Instruction for Ireland in 1902. The book has an interesting chapter on Irish inland navigations. 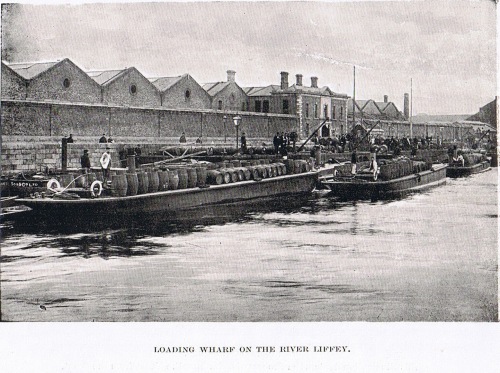 This photo (which, unlike most photos on this site, will appear larger if you click on it) is from the chapter on brewing. Of Messrs Guinness it says:

The Grand Canal supplies most of the water used for brewing. This water is of a moderate degree of hardness and is taken from filter beds at the fifth lock. The Vartry water, which forms the main supply for Dublin is used chiefly for boilers and other purposes where a soft water is found useful. The enormous amount of water used is shown by the fact that, irrespective of the produce of two wells situate within the premises, the Company pay over £4,000 per annum though the rates are as low as 2.5d and 4d per 1,000 gallons. […]

The firm owns 160 drays and floats, 153 horses, 9 steamers, and 5 motor trucks, and more than 120 drays of stout leave the establishment daily, whilst the principal railways in Ireland have connecting lines to the brewery. A special quay extends along the Liffey opposite the entrance to the lower level of the brewery. Steam barges belonging to the firm take the casks from this quay and bring them down to the Channel steamers anchored at the North Wall, as well as to the numerous vessels waiting at the mouth of the Liffey.