PROVIDENTIAL ESCAPE. — As the Limerick and Dublin (up) day coach of Friday was descending the canal bridge leading into the town on Monastereven, the pole suddenly broke and fell under the feet of the wheel horses, whereby the leaders were detached from the draft.

Here is the location of the bridge. 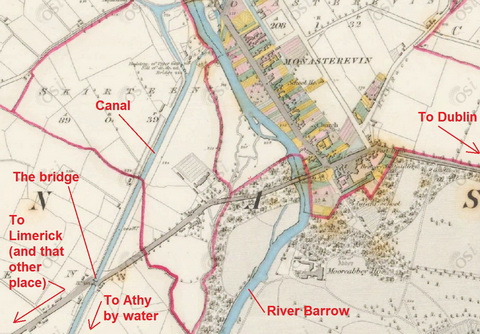 The bridge outside Monasterevan [OSI ~1840]

Were it not for the admirable presence of mind displayed by the coachman, the vehicle and passengers would have been precipitated into the canal dyke. A requisition, signed by the passengers, bearing testimony to the skill manifested by Dempsey (the coachman) at this critical moment, was forwarded by them to the mail-coach office, Dawson-street. Dempsey himself experienced the great liberality of the passengers, amongst whom were Messrs Bowen, Thompson, Doyle, Waller, Chute, Winder, and Kingsley, &c.

As the article says (below), the bridge crossed the canal at right angles [OSI ~1840]

We are authorised to state that the aforesaid bridge is the most dangerous on the Limerick and Dublin road, and that this matter will be submitted to the favourable consideration of the proper authorities. The lives of her Majesty’s subjects are not to be endangered, nor is the progress of the mail to be retarded to save an outlay of some seventy or one hundred pounds sterling. It is notorious that all the coaches slacken their pace to turn the angle of this bridge, which, instead of being accommodated to the road, is built at right angles to the canal. — Evening Packet.

The Ordnance Survey 25″ map of around 1900 suggests that the alignment of the bridge is (at best) slightly easier for road users. It does not, though, tell me anything about whether the road crosses the canal on the flat or on an arch, although folk more skilly than I at reading maps may be able to work it out. 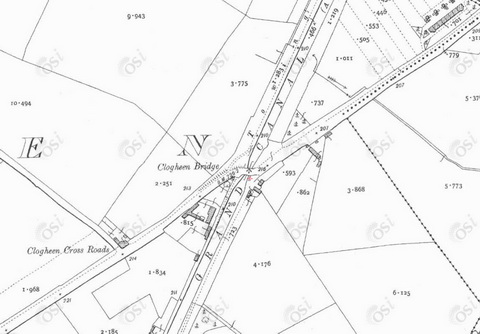 Ruth Delany, in The Grand Canal of Ireland [David and Charles, Newton Abbot 1975], says that “The main Limerick road bridge near Monasterevan was blown up …” in 1922; I presume that that was part of the republican contribution to economic development.

Current headroom under the bridge

So when did the bridge cease to be arched and provide a level roadway on both sides? Was that part of the rebuilding after 1922 or was it done at some other time? And, more importantly, how was it done? Was it necessary to lower the canal or to raise the road, or was the change from an arch to a horizontal beam enough to remove the hump?