Some dredging is done from boats but a lot of it, nowadays, is done with long-reach excavators, whether from a pontoon, from the bank or from the bed of the river. Some of the rigs pictured may have been on contract to Waterways Ireland while doing the work shown here. This contractors’ rig was employed to dredge the Abbey River in Limerick. 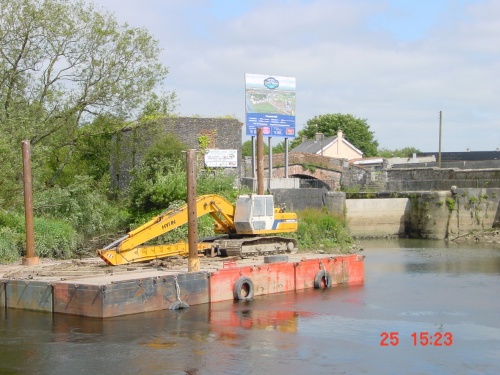 Dredger on the Abbey River

Here is a similar but, I think, larger rig at work on the tidal Shannon below the sealock in Limerick. 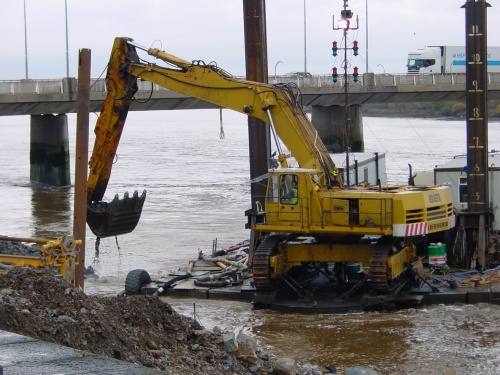 Dredging the channel below the sealock in Limerick

Here is a similar but smaller dredger on the Shannon–Erne Waterway. 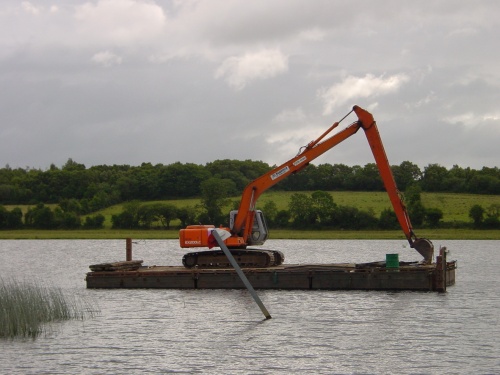 Dredger on the Shannon–Erne Waterway

The next one shows a small dredger in the section of the Park Canal in Limerick. It must, I think, have been launched by a crane. I don’t know whether it was a Waterways Ireland or a contractor’s boat. 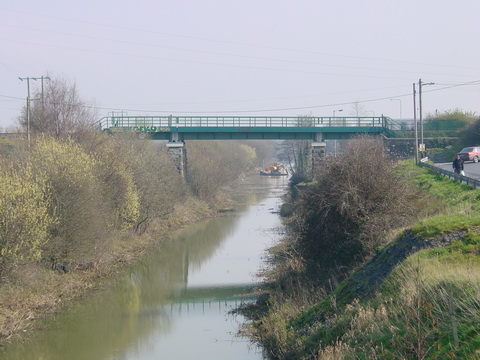 Dredging in March 2007. Note the steep sides of the canal

Here is an L + M Keating excavator dredging the lock in Limerick. There is more about Keating operations on several pages linked to this one. 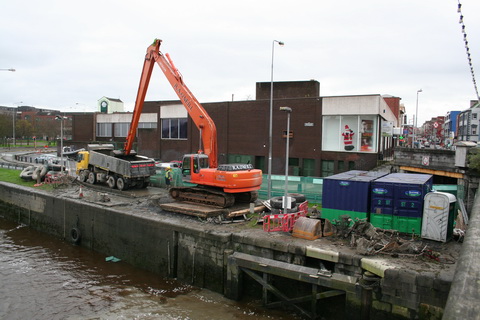 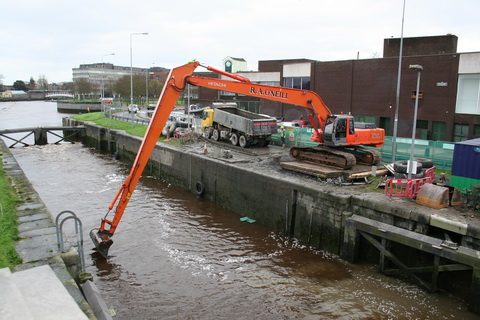 L+M Keating also dredged outside the canal harbour, where the pontoon in the first photo on this page was positioned. The large machine can float: its tracks are mounted outside what are in effect large pontoons. I think it can then flood them to hold itself in position. The large machine put the dredged material on the bank, whence a second excavator (just visible on the right) could load it into trucks. 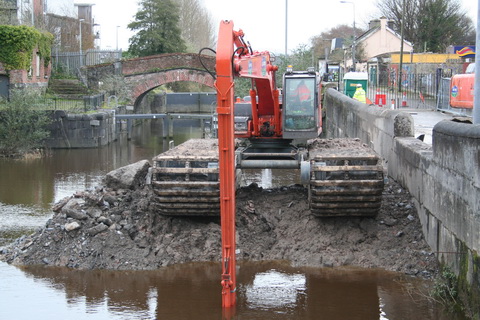 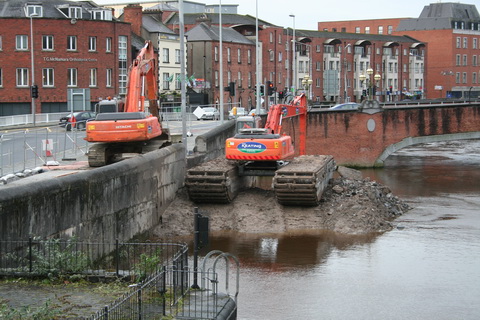 Keatings also have a wonderful machine called a Versi-Dredge, which I haven’t seen, but there are photos of it here and a PDF here. This is a private-sector dredger, available for excavating harbours and so on. It’s in the canal at Killaloe, outside Waterways Ireland’s Swiss Army Knife. 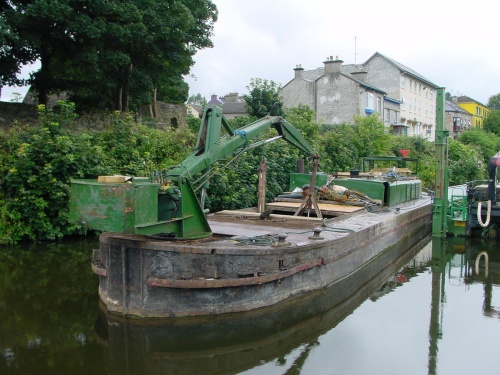 Shannon Foynes Port Company uses this vessel, the Shannon 1, built in 2007. It probably does all sorts of other things, like WI’s Swiss Army Knife; indeed it is described as a multi-purpose vessel [PDF], what used to be called a DEFT, and is officially a Damen Multi-Cat. 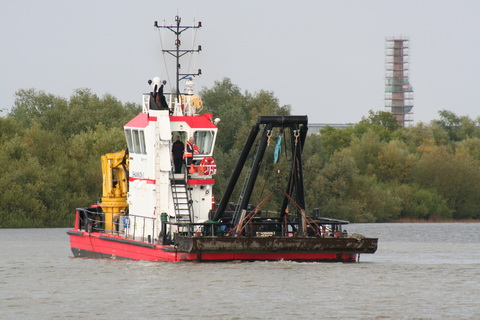 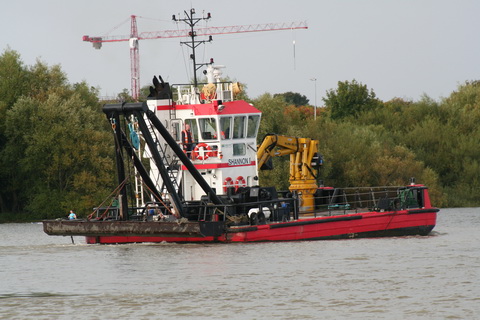 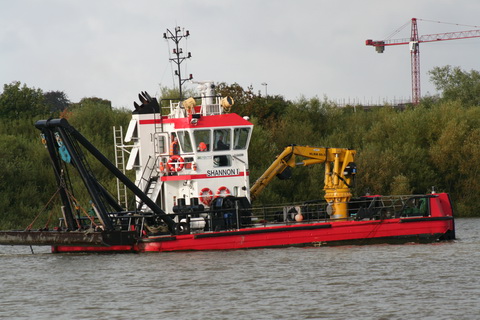 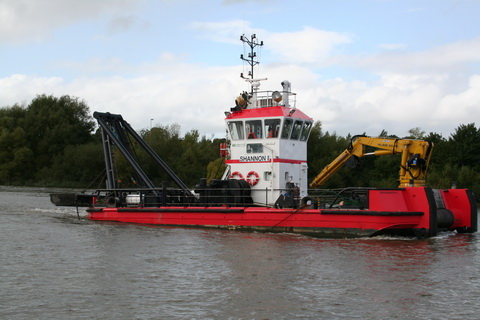 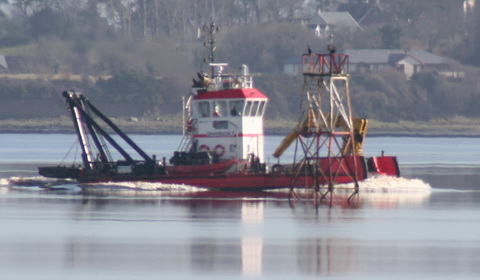 The older SFPC dredger, the Curraghour II, was built in 1959 at the Liffey Dockyard, as a successor to the 1912 Curraghour, which was a sister ship to the Port Lairge. Curraghour II (141′ X 32′ X 13′, deadweight capacity 440 tons) is a “combined grab and suction hopper dredger”, re-engined in 1998 with an 800hp Caterpillar diesel. [Details from Pat Sweeney Liffey Ships & Shipbuilding Mercier Press, Cork 2010.) 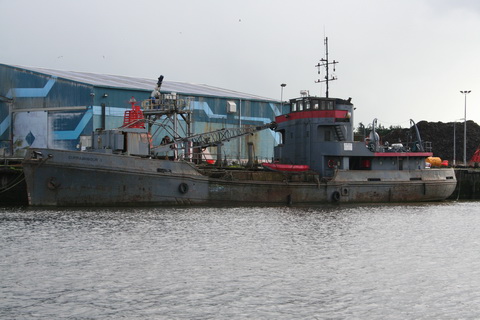 Here is a pontoon-mounted excavator at Kilmore Quay Club on Lough Erne. 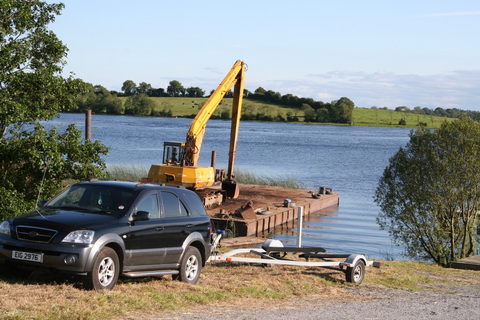 More to come as I find them.

2 responses to “Dredgers and dredging”