The abandoned Main Line of the Grand Canal 3

This is Page 3 of 4 about the abandoned Main Line of the Irish Grand Canal. Here. in case you missed them, are links to Page 1 and Page 2.

Just to recap on where we are and what we’ve seen so far ….

From James’s Street, at the top (north) of the drawing, we came down Echlin Street, turned right along St James’s Avenue and came down Basin Street Upper, which is east of where the City Basin (reservoir) used to be. We crossed the old line of the canal, “The Gut”, at “The Cage”, then looked at some of the streets at the south-east end of the map, paying particular attention to Bond Street and Long’s Place, which follow the line of the harbour and the canal respectively.

This page continues up the east side of the harbour, with some diversions to the Guinness empire.

The name “Grand Canal Place” seems to cover both the curved street at the north end of the harbour and the straight one running down the east side as far as the junction with Bond Street, after which it becomes Pim Street. Here is a photo taken from close to the south end, looking further south towards Bond Street.

You’ll recognise the railings on the right, marking the last section of the harbour to be filled in. I understand that the site, stretching east most of the way to Basin Street Upper, now provides accommodation for members of the travelling community.

The buildings on the right are part of the Guinness site; those on the left are small industries erected on the two northern sections of the old harbour. It should be noted that the harbour was open along this side. Bollards were erected to stop vehicles from driving into the water, but there were no walls or fences to keep out possible thieves or vandals. However, the 1907/11 Ordnance Survey map suggests that there may have been a wall or fence around the northmost, curved section at that time; I don’t know if that is the wall shown in the next photo, which looks south along Grand Canal Place, but this time from near the north end.

In case you’re wondering about the vehicles on opposite sides of the street about halfway down, remember that the Guinness Storehouse is a tourist trap …. 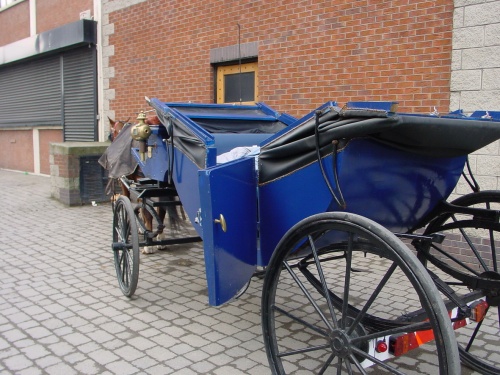 Now, another look at the map:

You’ll see that, from the southernmost section of the harbour, there is a channel leading east into another blue-hatched area surrounded by Market Street, Robert Street, Bond Street and Grand Canal Place. Ruth Delany, in The Grand Canal of Ireland (David & Charles 1973), says that Sir James Bond (no relation) leased land from the canal company in 1786, extended the harbour and started a market there. That explains two of the surrounding street names.

The markets lasted until 1817. In 1858 a new swing bridge (the Rupee Bridge) was built across the cut into the little harbour. In 1885 Guinness filled in part of the harbour to build its new malt store; the 1907/11 OS map shows the harbour at about one third the size of what it was on the 1837/44 map. The “Guinness pond” continued in use to carry malt to the brewery. Gerard D’Arcy (Portrait of the Grand Canal Transport Research Association 1969) says that malt was carried throughout the year but that autumn, when the new malt was available, was the busiest season.

Here is the malt store from Bond Street (near the Robert Street end).

The Guinness malthouse from Bond Street

And here it is from the Grand Canal Place end. 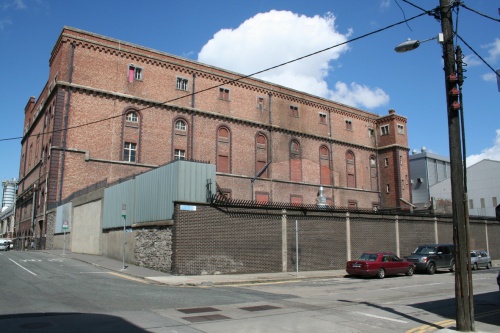 My guess is that the rise on Grand Canal Place is to the location of the Rupee Bridge, that the blank wall is roughly where the cut entered the Guinness pond and that the pond itself occupied the area inside the wall that hasn’t been built on.

Just to complement that, here’s the other (west) side of Grand Canal Place, looking north with, again, the rise to where I guess the bridge crossed the cut to the Guinness pond. According to Ruth Delany, in 1830 there was a store, leased to D E Williams, at this corner.

The west side of Grand Canal Place from Bond Street

Now let us go up Grand Canal Place to the junction with Market Street, which is parallel with Bond Street. Here it is from the junction.

Market Street from the west end

Here is the Guinness Storehouse, which is on the north side of the street. I gather it’s now Ireland’s most popular tourist attraction. It is well worth a visit, even if the top-floor bar is full of young trendy folks rather than moustachioed pint-drinkers leaning on the bar. 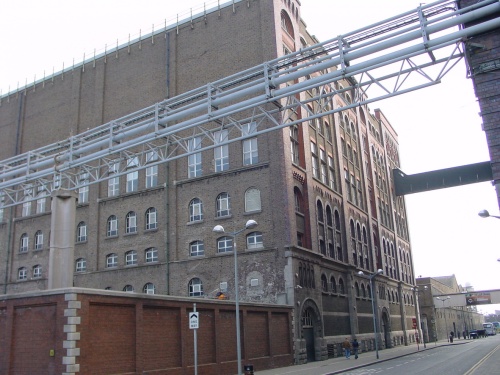 Looking in at the entrance from Market Street

And, if you visit, you may be able to look out of the windows, not just at the brewery …

Looking out the window

… but also at the Grand Canal Harbour. Here’s the curved building at the north end of the harbour …

The curved building from the Storehouse

… with some of the small enterprises that have been built on the site. They are all now being cleared out: on my most recent visit only one of the premises was still occupied and the area was scheduled for development.

In the photo above, you can see the Basin Street flats in the distance. In a line with them, you can see a tall, thin building, and I think it might have been one of the original warehouses: Ruth Delany’s drawing of the harbour in 1830 put the Ballinasloe store there, at the southern end of the curved section of the harbour and on the west side of the cut leading into that section. On the opposite side of the cut, at the east end, was the Inwards store. The Ordnance Survey map of 1907/11 shows a footbridge linking the east and west sides of the cut.

Gerard D’Arcy tells us that this curved section, the innermost section of the harbour, was known as the Outer Harbour “because its quay was outside the gates of the harbour area proper.” Unfortunately, Ruth Delany refers to it as the Inner Harbour. To avoid confusion. I’m going to refer to it as the curved harbour, calling the other two the middle harbour and the southern harbour.

Gerard D’Arcy says that the curved harbour became a graveyard for wooden boats, and that much sugar from Carlow was unloaded in this section. This harbour (Ruth Delany tells us) was filled in 1960.

Here’s a close-up of the eastern end of the curved building.

The eastern end of the curved building

I don’t know what the white wall was for: Ruth Delany’s 1830 map shows a gap there. The curved building itself is described as “Guinness laboratory and store”. The Grand Canal Company’s offices were in William Street at this time: they didn’t move to the harbour until 1863.

Here is a final photo from the Guinness Storehouse.

You’ll see that there is another narrow old building sandwiched between two larger, more modern buildings. This too might be one of the old buildings, but (see Page 4) I’m not certain whether it would have been between the curved and middle harbours or between the middle and southern harbours (where Ruth Delany shows the Limerick store, with “sugar store in later years” on the eastern quay and no footbridge linking the two quays).

Gerard D’Arcy says that the middle harbour was used entirely for loading and unloading, although mostly at the western end as the eastern was open to the road. The western quay was, he says, used for loading stout and unloading empty barrels, and there was access to the quayside for a mobile crane. This harbour was filled in 1960.

The southern harbour, according to Gerard D’Arcy, had a fixed crane used for light items; stout barrels were loaded and unloaded; boats rarely moored at its northern end; sugar was unloaded and stored. Spare boats were moored in this section and the three dry docks allowed boats to be serviced, repaired and painted. Ruth Delany’s 1830 map shows a shipwright’s shop between the dry docks and the canal.