The barge at Plassey

The old, and now disused, Limerick Navigation was in five sections:

Here is a rough sketch-map. 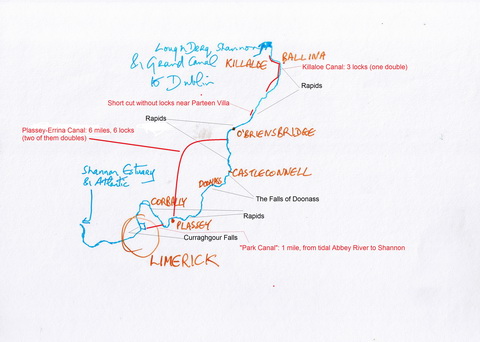 On the second section, the river to Plassey, the towing-path was on the south bank. Boats and their towing horses therefore had to get across the Shannon at Plassey, and a ferry carried them until Thomas Rhodes, working for the Shannon Commissioners, built the bridge usually known as the Black Bridge.

A little distance below Plassey, on the north bank, lie the remains of a barge. It has been there for many years, but I have not been able to find out exactly how long. The barge is easier to see from downriver than from up.

The barge on the bank

John Rainsford, in “The Old Harbour Canal Part One: Commercial Activity” (The Old Limerick Journal No 43 Summer 2009) says this:

Thomas Sheehy drowned after his barge carrying stone from Gully’s Quarry (Gillogue) capsized around 1900. The other three crewmen escaped from the icy water. The often dangerous condition of barges was exposed by the ease with which the limestone cargo had shifted in the hold. The remains of the barge is still visible today near Groody.

All but the bow is buried

Is that the barge shown here? Kevin Hannan, writing in the same journal some years earlier, said:

Another tragedy was the accidental drowning nearly 90 years ago of Thomas Sheehy, the Lock keeper at Annabeg (Plassey),who was one of a crew of four on a barge which foundered in the Shannon about half a mile below Plassey Bridge. The barge, which was an old wooden structure, was loaded with rock from Gully’s quarry (Gillogue). His body was recovered at Coonagh on the first anniversary of his death.

Coonagh is on the Shannon Estuary, downstream of Limerick.

I have not been able to find, in the Irish Times archive, any mention of any fatal accident on river or canal that sounds anything like the incident described by Kevin Hannan or John Rainsford. I have searched using variant spellings of Plassey and Gillogue, with and without the name Sheehy, but with no success.

Channels for rubbing-strakes on the port bow ...

... and on the starboard: five rows of them

The barge at Plassey (or Plassy) seems to be built of iron, not of wood, although it may have had a wooden deck.

You should be able to see the location here on the Ordnance Survey map. The last number in that URL should be 6, which means the zoom is set to one level below maximum; if it isn’t, make it so. Then select Historic 25″ on the right-hand side, to get the map for around 1900. You should see Gillogue (or Gilloge) Lock (still occupied by the Gully family to this day) near the top right, and the quarry beside it. It’s the second lock up on the Plassey-Errina Canal. Close to the bottom you should see Plassey (or Annabeg or Annaghbeg) Lock, just above the junction with the Shannon, and the River Blackwater parallel with the canal. The Black Bridge (Plassy Bridge), which replaced the ferry, is just upstream of the junction. The barge is downstream, on the north bank of the river.

In Gilloge Loch quarry, two and a-half miles north-east of Limerick, there is a good hydraulic limestone, which was
used extensively during the building of the new dock at Limerick.

But while this evidence supports the notion that stone would have been carried from Gillogue down the Shannon, it does nothing to pin down a date or to help prove that the barge at Plassey is the Sheehy barge. There have been mentions of at least one other barge wrecked or abandoned below Plassey.

If we don’t know when the barge was abandoned, can we tell anything — from the design and structure of the barge itself — about when or where it was built? I can’t, but perhaps there is someone who can. If these photos give you any ideas about when or where this barge might have been built, do please leave a Comment below. I have higher-resolution images, which I can email to you if you want them.

Looking along the port side 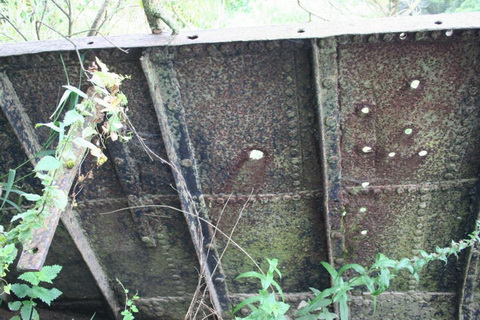 Port side, inside looking out

Bow, inside looking out

Port side again. Note the horizontal piece, presumably to support a deck beam

To give an idea of size

Thanks to Colin Becker (seen above) for providing the boat and the expertise and to the University of Limerick for permitting us to launch it from the UL boat club slipway.

It may be entirely irrelevant to mention that the Inland Steam Navigation Company/City of Dublin Steam Packet Company had over fifty iron “lumber boats” or “trade boats” (unpowered barges or lighters, towed by horses or by steamers) operating on the Shannon from the 1830s or so. They included the first iron vessels to be built by John Laird. So where did those boats go when the Company ceased operating on the Shannon?

Note: this page replaces one on my old photographic website; its contents will gradually be transferred to this site.

9 responses to “The barge at Plassey”