Hariot Hamilton-Temple-Blackwood, Marchioness of Dufferin and Ava, from Killyleagh Castle in Co Down, was a mere countess when her husband became Viceroy of India in 1884. She set up the Countess of Dufferin’s Fund [Google translation from German: the English article seems to have disappeared] to provide better healthcare for Indian women. [There is what looks like an interesting article here, but you have to subscribe to get beyond the first few paragraphs.]

In 1902 Her Excellency Lady Northcote, wife of the Governor of Bombay [now Mumbai], decided to raise money to support the Dufferin Fund. She was the adopted daughter of Lord Mount Stephen, first President of the Canadian Pacific Railway, who himsself donated large amounts of money to hospitals. Lady Northcote decided to organise a five-day Fancy Fete,

… the proceeds of which have once and for ever placed upon a sure basis the finances of the Bombay Branch of the Lady Dufferin Fund.

The Shannon River was the centrepiece, and we’ll get to that in a moment, but first some information about the organisation of the fete and the other attractions.

The joint secretaries were Marshall Reid, W E Crum and T Birkett; W D Sheppard, the Municipal Commissioner, exerted his influence and energy and assistance was provided by Government civil and military, the Church, the King’s Navy, the Bench, the Bar, Commerce and Municipal Self-Government. The committee was of course all male, but there were both ladies and gentlemen amongst the helpers.

The committee and the helpers 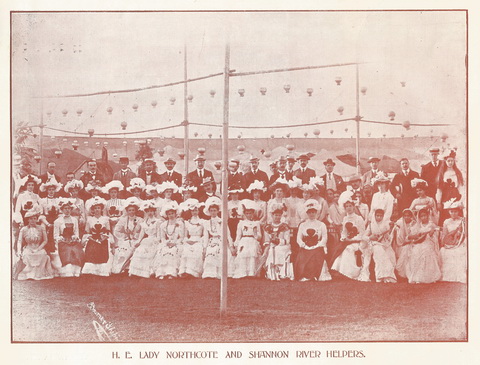 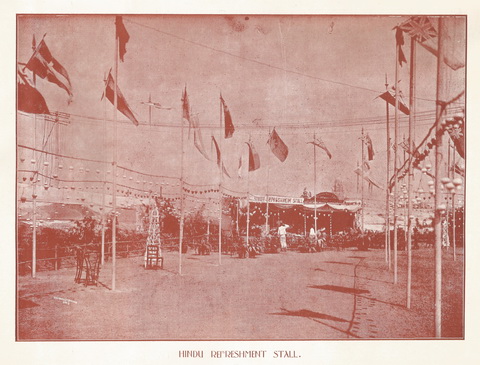 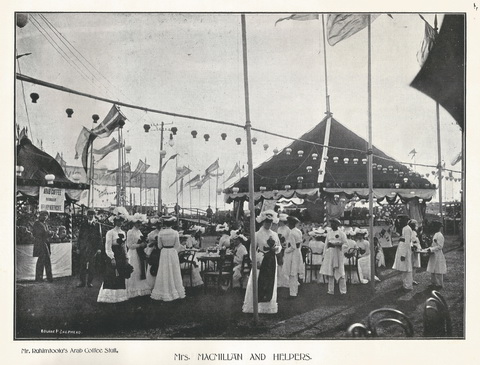 There was even a souvenir programme, with photographs by Bourne & Shepherd.

The idea of using the Shannon River [not River Shannon] as the central theme seems to have come from Charles Carkeet James, who is widely known as the author of Notes on Disposal of Sewage at the Matunga Leper Asylum, Bombay [Times of India Press, 1901], Drainage problems of the East [Times of India Press, 1906; revised and enlarged edition Bennett Coleman 1917], Oriental Drainage: a guide to the collection, removal and disposal of sewage in Eastern cities, with a glossary of sanitary and engineering terms, etc [Times of India Press, 1902], Sewerage of Cairo: Report on the second section [National Printing Dept, Cairo, 1910]  The Main Drainage Of Cairo [Minutes of the Proceedings Institution of Civil Engineers Vol 202 Issue 1916, 1 January 1916].

The idea of this masterpiece of engineering originated with Mr C Carkeet James, the Special Drainage Engineer of the Bombay Municipality, to whom Mr Sheppard, the Commissioner, confided his intention of helping Her Excellency Lady Northcote and effecting something worthy of the City of Bombay. Mr James, who only recently returned from England, where with the spirit of the true engineer he had probed the very “arcana” of the Canton River at Earl’s Court, drew up a scheme for a similar though smaller stream, to be called “The Shannon River.”

I have been unable to ascertain whether Mr James, Mr Sheppard or Lady Northcote ever visited, or knew anything about, the real Shannon, but it is clear that they had the Irish river in mind. Three pieces of evidence support that conclusion:

The map of the Shannon showing the location of Paradise

No sooner was the plan outlined, no sooner was Her Excellency’s consent obtained, than the work of turning the north end of the Oval into a Fairyland or, as it was appropriately termed, “Paradise,” was vigorously pushed forward. From the point where the Mono Railway Cars set down their lviing freight, there stretched eastward and westward an iron fencing, furnished at intervals with gates through which the sightseers poured in and out. Within the iron fencing lay the first enclosure, decorated by the artistic efforts of Mr Nigel Paton with many a plant and shrub, and radiant at night time with the light of a myriad festooned lamps. Eastward of “Paradise” might be seen a small and cleverly fashioned rustic bridge, passing over which one reached the very starting point or source of the River.

The river featured scenery painted on canvas: “the practical application of Art, of which India stands in such need.”

The river, which was constructed by Messrs Vishnu Hari Athavale & Co, was composed of a concrete foundation with side walls of brickwork plastered with Portland cement. The total length of the journey was about 770 feet, the width of the river being 3 feet 6 inches, and the depth of the water 1 foot 3 inches. A short length of 90 feet at the commencement was straight, but subsequently the river wound its way in various directions, ultimately terminating near the starting point.

At this point the water was lifted by a powerful water-wheel and discharged into the head of the river. On the line of the route were 6 tunnels having a total length of 356 feet, the longest tunnel being 100 feet in length. These were constructed of expanded metal fixed on round iron supports covered with cloth painted a dark green. The materials required were lent by Messrs Marsland and Price, who also superintended the construction.

The head of the river

Mr Hewett superintended the launching of each boat; men of King’s Navy

… hauled up the craft unceasingly from the landing-place, wiped the seats, helped in the visitors and despatched them once more upon their tortuous way. […] Truly the East and the West met, if ever they did, upon the Shannon River.

The mono-railway was laid by Marsland & Price of Bombay. As Mumbai is now acquiring a new elevated monorail, there has been some interest in earlier Indian monorails. The Kundala Valley monorail, constructed in 1902, used the Ewing system, in which a set of wheels running on a rail took the main load while a balancing wheel, on the other side, ran on a roadway. The same system was used on the Patiala State Monorail, built in 1907, which also managed to use locomotive haulage.

The Patiala was constructed by Marsland and Price, who laid the Bombay line for the Fancy Fete. But the two photos (below) don’t, as far as I can see, show a road wheel for balance; it may be that the draught animal does that job as well as providing propulsion. That might explain why the animal is to one side of the car rather than ahead of it.

The system is described thus:

[…] the strange open car, in which the steed, be it horse or bullock, trots along by the side of the passenger, while the dusky Jehu keeps guard behind, draws up alongside, discharges a fresh relay of visitors back from the Shannon River, and waits for us to take our seats. How the people flocked to it, Native and European alike! The miles which the cars covered during the five days and nights must have exceeded even the distance traversed by that Pearl of Elephants, whose giant frame from time to time swayed up and down the avenues of the Fete. The groups of passengers by the mono-railway were almost as numerous and cosmopolitan as those which crowded into the boats. […]

But see! The car fills quickly, the driver mounts his seat, the whip cracks, and the journey begins, past boxing booths, the weird recesses of the palmist, the Cafe Chantant, the Science exhibition, and many another attraction, too numerous to mention. And so it goes on, until we arrive at the entrance to the Shannon River Show. 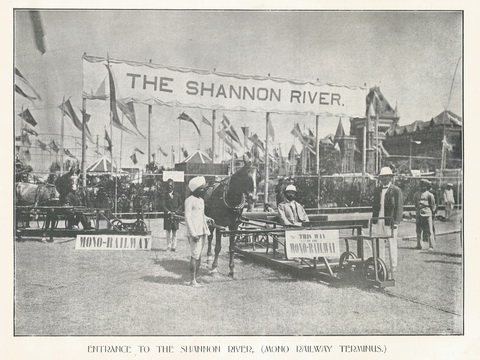 I am grateful to Andrew Waldron for these comments:

The horse drawn attraction at the show did use the hauling animal as the balance to keep the car upright, as I have looked at the Bombay system and this used that same system. In Delhi the Railway Museum actually have one of these horse-drawn animal cars preserved and they also have the steam mono-rail with balance wheel, running on a stone pavement to one side of the loco. In 2008 the Steam Mono Rail was operating to visitors but I have no references that are more recent.

A panorama in two parts 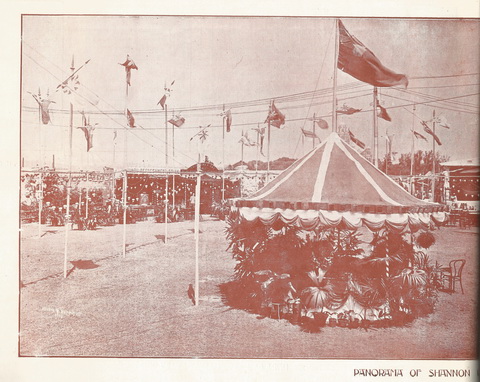 Not a lot of people knew about that.