A pill is a tidal creek. The term is associated with south-western England and Wales, especially along the Severn, but it is also found in south-eastern Ireland. Along the River Suir, we find Pouldrew Pill, an unnamed pill and, of course, the Pill that leads to Pilltown (I admit to having no evidence, but I find Wikipedia’s explanation of the name Pilltown rather less than convincing). If you know of other Irish pills, do please leave a Comment below.

Brian Simpson, in a Comment on this page, drew attention to St John’s Pill in Waterford. He wrote:

Would there be any chance of listing this old waterway in Waterford City which was used by coal, sand and gravel barges up to the 1950s? The waterway has suffered badly over the years; however it is staging somewhat of a comeback with a flood relief scheme under way, clearing most of the river, and our volunteer group working to restore the old canal stretch on the Tramore road. The major issue with the river is two low-level bridges and some pipes were built across it in the 1980s, cutting much of it off to boating activity. We got a commitment from City Council that the pipes issue would be dealt with as part of the flood scheme.

I am pleased to do so. Brian’s group has a blog, with pics of kayaking on St John’s Pill (or River), and a Facebook page with the latest news. He kindly supplied me with photos of the small-boat rally on the Pill in May 2015; I’ve put them here. 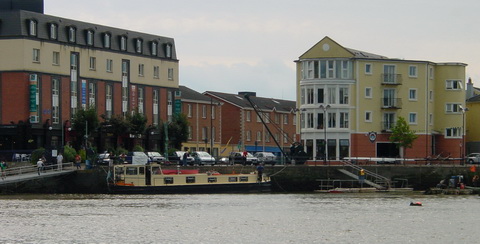 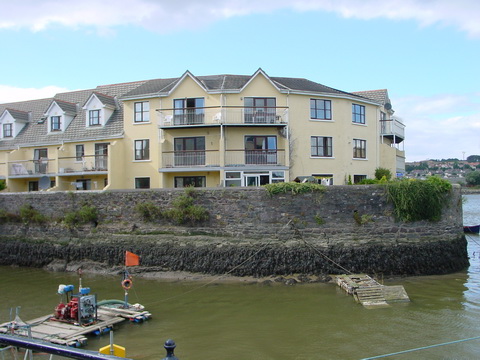 The north-western side of the entrance to the pill

I have been trying to find evidence of the use of St John’s Pill for navigation, but I have had little success, and I would welcome any information that readers could provide.

According to askaboutireland, Waterford’s Great Charter Roll of 1372 shows Waterford at the top, and then:

Below the city is St. John’s Pill, a tributary of the Suir river, with three galleys and on the bank below are rabbits, brought to Ireland by the Normans as protein for the winter.

The Charter Roll is in the mediaeval gallery at Waterford Museum of Treasures (although I can’t find it mentioned on either the website or the Facebook page). 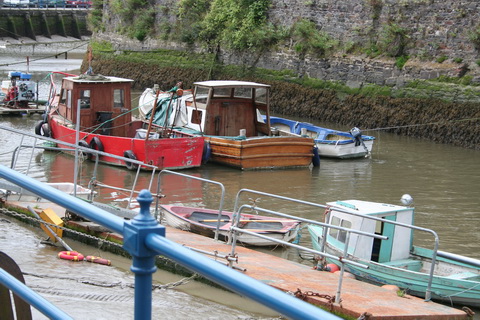 If I remember correctly, mud was being pumped out of the pill in 2007; there is a pump on the raft ahead of the two larger boats

I had a quick look through Charles Smith MD’s The Ancient and Present State of the County and City of Waterford [first published 1746; revised and enlarged edition 1774; 3rd edition 2008 edited by Donald Brady, published by Waterford Co Council in association with Waterford City Council] to see if I could find anything about navigation on St John’s Pill. I found nothing directly relevant (perhaps because of insufficiently thorough reading) but this is suggestive:

Among the other edifices, I might have mentioned an ingenious mill, erected by Thomas Wise, esq; which grinds, sifts and bolts the several kinds of meal and flour at the same time; and near to it, are considerable granaries erected, which will be both an advantage to the town, and a profit to the proprietor. It is situated on John’s River, without Bowling-green gate.

I have no map showing Bowling-green gate, but my guess is that the location was around Wyse’s Bridge. If there was a water-powered mill at that point, with all its accoutrements, that may have formed an upstream limit for navigation, at least as long as the mill lasted.

I presume, incidentally, that that Thomas Wise was a forebear of the Sir Thomas Wyse who married Napoleon Bonaparte’s niece.

JOHN’S RIVER, a rivulet of the county of Waterford, Munster. It rises in some marshy grounds about 3 miles south of Waterford; flows northward to the Suir within the bounds of the city; and is there navigable at high water for the largest description of boats. It is crossed within the city, by two old bridges, called John’s-bridge, and William-street-bridge, and by one of recent erection, situated near the old abbey of St Catherine, and called Catherine’s-bridge.

A rivulet called St John’s Pill runs in a serpentine course along the east side of the city to the Suir; but it cuts off only small outskirts of the streets, and, in its boldest and longest sweep, passes completely away from the edificed portion of the town. The river Suir, while passing the town, has a breadth of from 230 to 350 yards; and it pursues an east-south-easterly direction to the termination of the street called the Mall, and then slowly curves to the commencement of a south-easterly direction at the mouth of St John’s Pill. […]

On the 20th June, 1816, the royal assent was given to an Act of parliament for ‘deepening, cleansing,and improving such parts of the river Suir as constitute the port and harbour of Waterford, between Bilberry Rock and Hook Tower, including St Catherine’s, commonly called St John’s Pill, and the appointment of a pilot-office and ballast-office in the said city of Waterford.’ […]

So the Gazetteer suggests that vessels entered St John’s Pill from the Suir but it says nothing about any traffic up the Pill. I haven’t explored local (Waterford) sources to see what they might be able to tell us about such traffic, so I would be glad to hear from anyone who has information.

Brian Simpson said that the Pill “was used by coal, sand and gravel barges up to the 1950s”. Such types of traffic were often little noticed. It would be interesting to know whether the cargoes were going just as far as the lower reaches or whether they went further upstream. It would also be interesting to know whether cargoes were carried down the pill into Waterford; was turf harvested from Kilbarry Bog? [Addendum: Brian Simpson says that it was not: that the bog is more like a fen or reed marsh.]

The OSI map of around 1900 shows two industries that might have used river transport.

The first is the gas works, which would have needed a constant supply of coal. It is just below John’s Bridge, which is marked as the highest point to which the tide flows. If there were enough depth under the two downstream bridges, boats could have come up with the tide, their crews equipped (as were those of many Suir and Barrow vessels) with long poles; little headroom would have been needed under the bridges.

The second industry that might have used water transport is that of the lime kilns, situated above John’s Bridge. Both coal and limestone could have come in by water; if turf was available from upstream, it too might have been used. Finally, the lime produced could have been distributed over a relatively wide area by boat.

The kilns are, as I said, above John’s Bridge. The St John’s River group have an interesting photo on their Facebook page. While that ramp could now be used for canoes, kayaks and other such small craft, I would be surprised to find that it was built for the purpose. I am speculating on very little evidence, but I wonder whether that ramp might have been designed to facilitate man-haulage (or perhaps horse-haulage) of a boat that had reached the bridge using the tide and that needed to move further upstream.

Edit: this photo suggests that only very small craft could have got under the bridge. I don’t know whether the river was always so shallow. 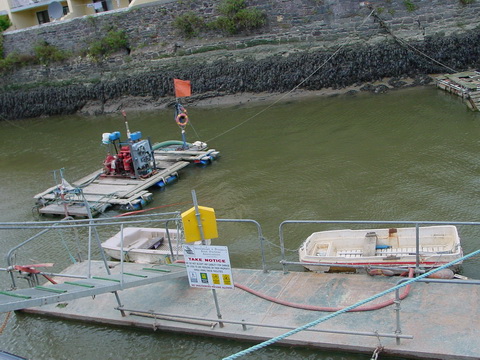 That invaluable publication The rules of the road at sea : comprising the regulations for preventing collisions at sea, 1910, and rules in force in harbour, rivers, and inland waters, with explanatory notes and observations by Hubert Stuart Moore and Norman Duncan [J D Potter, London 1922; available free online] covers Waterford, the Suir and St John’s Pill. The items relevant to the pill are these:

Vessels in St John’s Pill, waiting to settle on the bottom when the tide goes out

Where did the rafts of timber come from? Where were they going to? How were they propelled into (or out of) Waterford? Were Messrs Graves of Waterford the guilty parties at whom bye-law 22 was aimed? Their timber yard was on the Suir just downstream of the Neptune shipyard and iron works, in other words just around the corner from St John’s Pill.

The remains of the Graves quay (I think). If I remember correctly, Graves had the first newly-built Bolinder-powered vessel in Ireland, the Rose Macrone

It will be evident that this page is a long way from providing a full account of cargo carrying on St John’s Pill. There is more speculation than evidence, but I hope it may serve to stimulate interest in the subject. I will be glad to hear from anyone who can help to fill out the story; if you can, please leave a Comment below.

Paul Clancy (see Comments below) has sent this photo “showing just a small part of the mill to the left hand side”. I am grateful and would welcome further information.

Here [October 2014] is a little more information about the history of the upper reaches of St John’s Pill. And here [March 2017] is an ad suggesting that the Pill was in use in 1785 — and that flour could be carried from Portlaw via three rivers: the Clodiagh, the Suir and St John’s Pill.