Waterways widdershins: how to do the Royal–Grand–Shannon ring

The Irish Ring, the Old Triangle, the Green & Silver Route, the Royal–Grand–Shannon looped route … whatever you want to call it. I wrote about its exploitation, and in particular about the need for hirers and hire-boats on the route, on this page. Here I want to make some practical suggestions for anyone thinking of travelling the route, and in particular anyone wanting to do it in a hired boat.

I should emphasise that this is not to be taken as definitive: I will be happy to receive comments, suggestions, amendments and so on, especially based on people’s experience. This page was written in March 2011, before anybody had completed the trip in one uninterrupted period and, as far as IWAI Dublin knew, only three boats had ever done it.

This page has information on the trip from the Liffey to the Shannon, along the Royal, undertaken by Clontarf Yacht and Boat Club in April 2011, with some useful tips (especially about the tide) and notes on the time taken.

They have some practical advice here, as well as links to logs from some boats that did the journey.

An experienced IWAI Dublin boater who took his barge around in 2011 told me:

Hard for me to comment on the time aspect as its written with hire (smaller) boats in mind; however 3 weeks seems reasonable for a typical 40 ft-ish wide beam narrowboat on holidays. […]

Tides/bridge lifts shouldn’t be an issue. We supplied the dates based on most suitable tides at weekends. One thing that the “only six lifts” gives rise to is more boats per lift. Getting fleets of boats in from Castleknock and across is much more difficult than one or two per day and does make a long day out to Castleknock, much longer. We’re hoping to experiment with some overnights in Spencer Dock this summer by bringing boats across the day before or after the bridge lift.

Two further items of news. One is that a suitable water supply for the Royal Canal has not yet been secured and a shortage of water caused the closure of the summit level in April 2012. The other is that Locaboat, who operate penichettes, have opened a base at Clondra, at the western (Shannon) end of the Royal Canal, and (I am told — but please check with them) are prepared to allow suitable boats into Dublin, across the Liffey and out again. It is said that they think the round trip will take four weeks, so it could be done over two years (which is allowable within IWAI Dublin’s award scheme).

When to do it

There is one severe limitation: the lifting railway bridge in Dublin, below Lock 1, which is lifted on only six days a year. The days should be the subject of a WI Marine Notice but I haven’t seen one for 2012 yet; there is a provisional list on the IWAI Dublin page (see above). 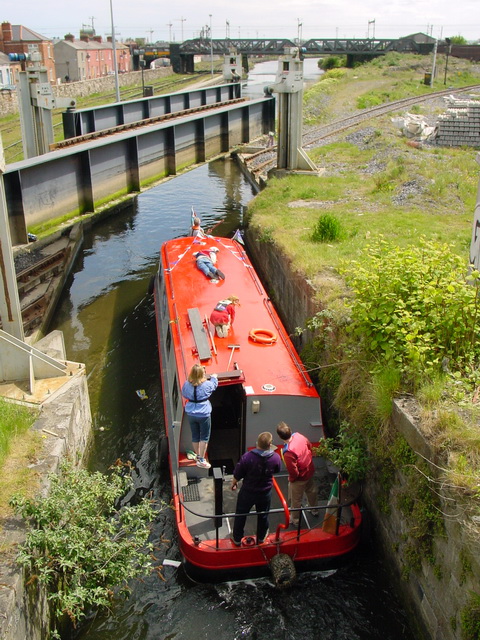 The lifting bridge below Lock 1

So there are only six days in 2012 when you can get through the lifting bridge (which is too low for even a canoe to get under. There is a description of the canal, from Lock 1 to Lock 5, on this page).

You will see, on that page, some photos of Lock 2 on the Royal. It seems to me that you need at least three people to get through Lock 3. As it happens, that is the minimum crew size Waterways Ireland asks for.

Doing it widdershins has two beneficial effects. The first is that it may help in summoning the daemons needed to raise the bridge. The second is that, if anything goes wrong with the bridge and you can’t get through, it’s a lot easier to get to a safe mooring (in Grand Canal Docks) from below the bridge than from above it, when you would have twelve locks to work through, many of them deep doubles (staircase pairs), to reach Blanchardstown.

Lifts are timed to ensure that (a) tides and (b) the attendance of Waterways Ireland and Iarnród Éireann [Irish Rail] staff will be at times that will make it possible to get out of Grand Canal Dock, in to Spencer Dock, under the non-lifting lifting bridge at Sheriff Street and up to the railway bridge early enough to make it possible to get through the twelve locks to Blanchardstown on that day.

Note this account of other Dublin obstacles on the Royal. The electricity cable has now been removed.

As far as I know, these are the Irish hire firms with steel boats suitable for canals. If my list is wrong, please let me know and I’ll correct it.

Note that I did not ask these firms whether they wanted to be listed; their inclusion here does not mean that they are willing to hire boats to people wanting to travel the ring. If any firm wants to state categorically that it will not do so, I will annotate the list accordingly.

As well as these, some of Locaboat’s GRP penichettes are, it is said, available for hire.

You need Waterways Ireland lock-keepers to get you through Dublin (many of the locks are, er, locked). By coincidence, the traditional starting point for a descent into the city on either canal is the Twelfth Lock. The general plan is to start as early as possible and get through the city, to the secure moorings in the Grand Canal Dock, in one day IWAI Dublin does have some suggestions for possible intermediate stopping points. My own inclination would be to aim to get all the way in one day.

As I have suggested entering Dublin along the Grand, I will confine myself to that (widdershins) route. You need to alert Waterways Ireland well in advance, tell them you want to start as early as possible and then get your boat to 12th Lock (Lucan Road) by the earliest time that WI will agree to turn up on the appointed day. People often spend the previous night at Hazelhatch, where there are many boats (and a pub) and thus a degree of security; it takes about an hour to get from Hazelhatch to 12th Lock.

The figures given here are no more than a guideline. I show (below) the basis on which I estimated them, so that you can suggest changes or work out your own versions. I have not included Locaboat in the calculations; I understand that they recommend allocating four weeks to a (leisurely) round trip.

From hire base to Grand Canal 12th Lock

My estimates of the time required to get to Hazelhatch from:

On the day appointed for the descent into Dublin, leave Hazelhatch an hour before you’re due at 12th Lock.

There is no reason why you could not spend more than one day in Dublin. But take advice if you intend to try the Liffey.

From Royal Canal 12th Lock to hire base

My estimates of the time required to return to base at:

Here is IWAI’s advice on travelling on the Royal.

Here are the totals:

On the whole, I think my estimates are cautious. However, I have not included any allowance for the possibility of weather that would make it impossible to cross Lough Ree.

IWAI Dublin Branch suggests that the journey from the Shannon to Blanchardstown on the Royal should take about five days at eight hours a day. I put it down as six days at seven hours a day, but my total is very close to theirs. I counted 84.15 miles, 31 single locks, 2 double locks and 2 bridges (apart from the Lock 1 lifting bridge). Counting each bridge as requiring the same time as a single lock (an unproven assumption), each double lock requiring the same as two singles (probably a slight over-estimate), that gives 121.15 lock-miles. At three lock-miles to the hour (ie each lock or mile takes twenty minutes), that means just over 40 hours. A rate of three lock-miles may seem slow, but it accords with my own records for time taken on the Grand.

For the Shannon between Clondra (Richmond Harbour, where the Royal joins the Shannon) and Shannon Harbour (where the Grand does the same), I’ve suggested two days. I suggest imitating Rolt (see below) and spending the night at Tarmonbarry, which is close to Clondra but on the Shannon itself. Mooring below the lock there would allow an early start next day: the wind tends to rise with the sun, with relative calm (most but not all of the time) in the mornings and evenings, so an early start from Tarmonbarry gives the best chance of getting across Lough Ree in good weather. Overnight at Athlone and then downriver to Shannon Harbour next day.

Some faster trips have been recorded on the Shannon and Grand Canal, including those of the Tuesday Night Club. IIRC, it reached Dublin from the Riversdale base in four days on one trip.

When L T C Rolt did the trip, he seems to have spent nights on the Grand at Cornalour (Lock 31), Tullamore (where he spent several nights waiting for friends), Ticknevin (Lock 20), Robertstown, Lyons House (Lock 13) and Portobello on the Circular Line in Dublin, before moving down to Grand Canal Dock.

On the Royal, he spent one night in Spencer Dock, below the lifting railway bridge, then nights at Lock 14, Kilcock, Killucan (Lock 18), Mullingar, Mullawornia (Lock 40) and Killashee (Lock 44), After reaching Richmond Harbour, he spent the night at Tarmonbarry on the Shannon before exploring the north Shannon.

He spent another night at Tarmonbarry before crossing Lough Ree, reaching Athlone just before a gale; he then spent another day getting to Shannon Harbour, after which he went downriver to Lough Derg. We might say that he spent 17 days on the Grand–Royal–Shannon trip.

I would be grateful for comments and corrections.

10 responses to “Waterways widdershins: how to do the Royal–Grand–Shannon ring”