The rules of the road

Another subject which has engaged our attention has been the frequent accidents that have of late occurred from steam-vessels coming into collision with other vessels, and it appears that from the recent introduction of this mode of navigation no defined rules have been adopted to guard against such occurrences.

A Select Committee of the House of Commons was appointed in the year 1831 to consider the question of steam navigation, and the numerous accidents arising from the employment of steam-vessels. This branch of the subject came under their consideration, and in the Report which they laid before the House thet expressed their opinion of the necessity of establishing some regulations, which they briefly suggested; these, however, have never been adopted, and the evil continues to increase.

With sailing vessels the rule which has been laid down and admitted in courts of law, viz, that, when two vessels meet upon contrary tacks, the one on the larboard tack shall bear up, and that upon the starboard tack shall keep her wind, has been attended with the best effect.

We are aware that the same rule is not strictly applicable to steam-vessels, and that there exists great difficulty in treating a subject involving the varying nature of the circumstances in which steam-vessels are placed in a river as regards the state of the tide, the depth of water in the river, the draught of water of the steam-vessel, and particularly the more or less crowded state of the river, from the number of other vessels in motion, and their relative position.

But rules upon this subject have been laid down, and are enforced, in the Firth and River of Clyde; and we consider it of the highest importance that some “rule of the road” should be established, to be acted upon whenever circumstances will admit. We therefore annex to our Report a set of rules which have been laid before us, and which, we think, may be adopted with advantage.

Appendix C. Proposed Regulations for the Navigation of Steam Vessels

I. In the Thames, and in all the rivers and channels of the United Kingdom, and in all cases of wind, weather, and tide, steam vessels are to endeavour to keep on that side of the river or channel which lies on their starboard hand.

II. When two steam vessels are standing in contrary or nearly contrary directions, if their courses should lead them near each other, each vessel shall keep towards the starboard side of the river or channel, and thus leave each other on the larboard hand.

III. Whenever  a steam vessel may have to meet or to cross the course of a sailing vessel, or of a rowing boat, the steamer shall in all cases yield to the sailing or rowing vessel, whatever may be the state of the wind, weather, or tide.

IV. In passing any small rowing or sailing boat every steamer shall, if necessary, slacken or stop her paddles, so as not only to prevent the danger of too near an approach, but even so as to avoid giving them any just cause of alarm.

V. Although a vessel propelled by steam in any of the four above cases, may also have had recourse to the assistance of her sails, this circumstance shall in no wise alter the foregoing restrictions; for otherwise she would only have to hoist some small sail to evade them.

VI. All these regulations shall be equally in force at night as well as by day. And for their more effective execution at night every steam vessel, when in Pilotage water, shall carry between sun-set and sun-rise three sufficiently strong lights, in lanterns, so as to be seen in all directions, and attached to a yard which must be kept square, and raised at least six feet above the tops of the paddle-boxes; this yard may be attached to the mast, or otherwise raised to the requisite height above the vessel’s bow for that purpose.

VII. These three lights shall be arranged in the following manner:— One light on each yard arm at the distance of six feet from the mast, that is, twelve feet apart; and on the larboard yard arm one additional light, which shall be placed horizontally with respect to the other light, or vertically under it, according to the following conditions:

(1) All steam vessels which may be coming up any river or channel shall show the additional light three feet directly under the light at the larboard yard arm, viz:—

(2) All steam vessels which may be going down any river or channel shall show the additional light at the same height as the two other lights, and at the distance of three feet inside the larboard light, or half-way between it and the mast, viz:— 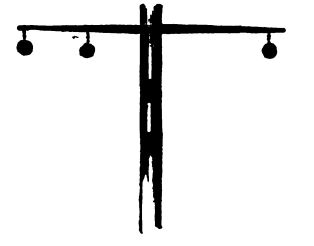 VIII. For any infraction of the foregoing regulations a fine, varying according to the culpability of the offender, but not exceeding five pounds, should be summarily levied upon the party and, as the only means of making those regulations effectual, one-half of the fine should be payable to the common informer.

Report from the Commissioners appointed to inquire into the Laws and Regulations relating to Pilotage in the United Kingdom Presented to both Houses of Parliament by Command of His Majesty. HMSO, London 1836

This entry was posted in Historical matters, Operations, Safety, Sea and tagged rules of the road, sea. Bookmark the permalink.