I am grateful to Waterways Ireland for letting me have the Shannon traffic figures for July 2013. As I said last month:

The usual caveats apply: the underlying figures (kindly supplied by Waterways Ireland) do not record total waterways usage because, for instance, sailing, fishing or waterskiing on lakes or river stretches, which did not involve a passage through a lock or Portumna Bridge, would not be recorded. The passage records are our only consistent long-term indicator of usage of the Shannon but they would not show, for instance, a change in the balance of types of activities from those in larger cruising boats to those in smaller (sailing, fishing, waterskiing) boats. It is quite possible, therefore, that overall usage might be increasing while long-distance cruising was declining.

[…] the figures show a small increase over 2012 in passages by private boats. I suspect that July’s warm weather will spur a further increase.

And so indeed it proved to be.

July’s traffic was up enough to increase the total for the year to date: the first increase (for the period January through July) since 2003.

Here are the figures as percentages of the 2003 figure.

The total is still around 60% of 2003’s figure: a significant decline. But there was a marked increase in private traffic …

… while the decline in the hire-boat traffic continued.

Over on Afloat, someone wrote that:

[…] a source close to Afloat.ie says that the falling numbers may be skewed by a growing emphasis on larger-capacity vessels on Ireland’s inland waterways, with eight- and 12-berth boats supplanting older four-berth vessels, and families and groups consolidating their recreational boating.

I don’t know what “skewed” is intended to mean. Well-capitalised hire firms may be adding larger boats to their fleets, but the number of passages is down by 60% and sources close to irishwaterwayshistory.com say that the combined hire fleet is down from about 500 to about 250 boats.

That doesn’t mean that the hire-boat industry is entirely dead, but it is much less important to the Irish waterways than it was. I don’t know of any published figures [if IBRA would like to supply them, I’ll happily publish them], but I suspect that employment within the industry has gone down and that its comparative economic importance to the Shannon and to the Irish tourist industry has declined too. And here is an interesting chart: 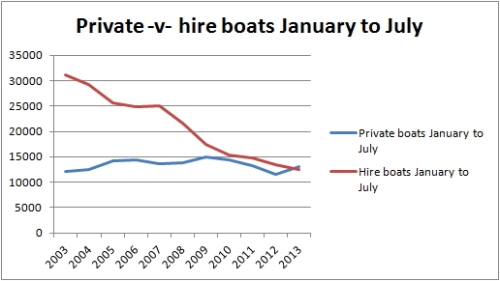 For the first time that I know of, the seven-month figures show that measured private traffic outweighs hire-boat traffic. It may be that we need new approaches to attracting more overseas visitors to the Shannon. According to Waterways Ireland’s Lakelands & Inland Waterways Strategic Plan 2010–2015 (which I can no longer find on the WI website):

The plan was short on hard numbers for its targets, but at least as far as the Shannon hire business is concerned, it ain’t working.

One response to “Transition?”