And be it Enacted, That all potatoes sold in cities, towns corporate and market towns and elsewhere, shall be sold and delivered by weight, and not by measure or in any other way whatsoever, and that such weight shall be according to the avoirdupois pound, fourteen pounds whereof shall make a stone, and eight stone one hundred weight, and that such potatoes shall be weighed, without fee or reward, at the beams and scales of the several places erected and kept pursuant to law;

and if any master or owner of any ship, vessel or boat, coming into any port, harbour or town in Ireland, with potatoes, or any market man, herbman, herbwoman, huckster, or any other person selling potatoes, shall sell the same by measure or otherwise than by weight, and shall be lawfully convicted thereof, every person so offending shall for every such offence forfeit the value of all such potatoes sold otherwise than by weight, and the sum of Sixpence for every stone of such potatoes, and the sum of Sixpence for any quantity under one stone;

and every person who shall demand or take any fee or reward for weighing any such potatoes, shall forfeit the sum of Twenty shillings, provided complaint be made within Three days after any such offence shall be committed.

Bill to consolidate and amend Laws respecting Customs, Tolls and Duties in Markets and Fairs in Ireland HC 183 HMSO 1830 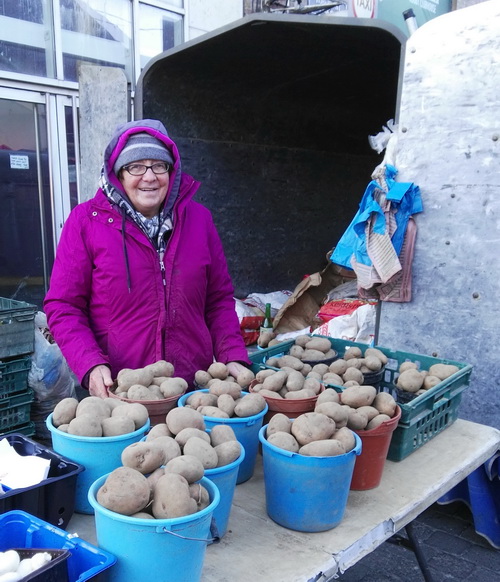 If the clause for enforcing the weighing of potatoes shall be passed into a Law and strictly enforced I apprehend it may be productive of much public inconvenience here where the use of Buckets as a measure for sale of potato’s is so general, and I can hardly conceive how such a number of Scales could be got up or attended to as would be necessary to accommodate the population of this City frequenting the Potatoe market.