Banagher, June 13. On Friday evening last a scene of a truly interesting nature to all lovers [of] angling took place near the old bridge which crosses the Shannon at Banagher, in the King’s County. An old and experienced fishermen, well known in that part of the country by the appellation of Tugg, between the hours of seven and eight o’clock in the evening, hooked a salmon of enormous weight and strength, a little above the bridge; the fish, after making a few violent efforts to extricate himself —

Flew through the glassy waves with finny wings,
Whilst Tugg still kept behind.

From eight until past eleven the contest was carried on with doubtful success, in nearly the centre of the river, which is here about half a mile wide — during which time the salmon was played (as anglers term it) up the stream, as far as Bird’s Island, a distance of more than an English mile from the place where the fish was first hooked; still the salmon was unwearied, and struggled as hard as when first hooked, notwithstanding the utmost skill of Tugg to weaken and bring him within reach of the gaff. 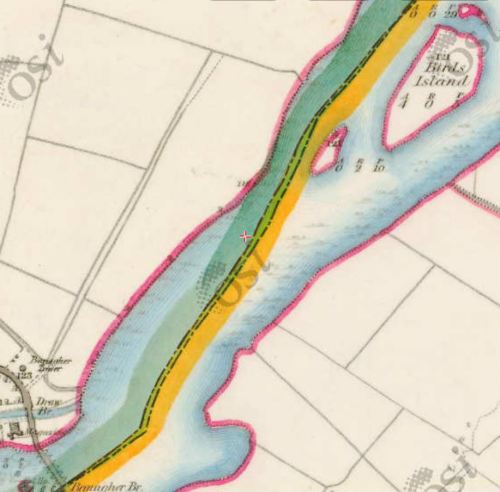 The town clock struck twelve at night, and yet victory had not declared for the indefatigable Tugg. Three hours more rolled by, when Tugg, nearly as exhausted as his adversary (after nine hours’ display of the utmost skill and perseverance in the Piscal art), had recourse to a strategem by which he made himself master of his finny prey.

Connecting the navigable parts of the Shannon above and below the bridge at Banagher, is a canal of about half a mile in length; into this canal, Tugg, with his wonted skill, coaxed the fish, and then letting him down to the lock, at the farther extremity, the upper gate of which had been opened to receive him, he was allowed to pass in, and the gate being immediately closed, the water was let off by the lower one, and thus the finny monster became an easy prey.

The salmon weighed 43½ lbs, and was presented by honest Tugg to our worthy and highly esteemed Magistrate, Thomas George Armstrong Esq of Gavey Castle. The sporting gentry of Banagher and its vicinity intend raising a sum by subscription to reward poor Tugg, in testimony of their approbation of his unwearied assiduity, skill, and, above all, for the strategem by which he became at length master of this noble fish.