I remarked in August, on sighting le grand bateau de Monsieur Thibault in Athlone, that it carried the Le Boat brand, not that of Emerald Star. Emerald Star is now one speck within Le Boat, which is one of the activities within the Marine Division of the Specialist & Activity Sector of TUI Travel, which employs 54000 people. 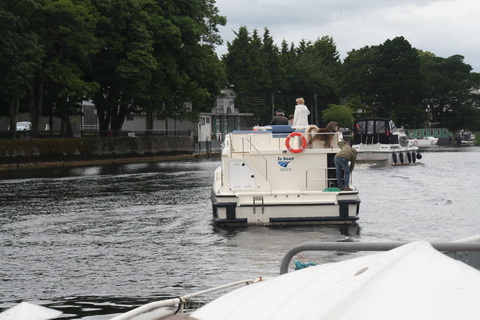 I wrote to Messrs TUI Travel’s “corporate communications” department at the time to ask whether the Emerald Star name was being phased out, but answer came there none: no doubt all 54000 employees were busy at the time. But I noticed today that a hapless seeker after truth, searching for “emerald star”, ended up here, so I had a look myself. There is no emeraldstar.ie website (and emeraldstar.com is unrelated) but the UK Le Boat site has a little badge on the top left of the page saying “Emerald Star from le Boat”. I wonder whether that appears if the site detects that you’re accessing it from outside Ireland. I could find no other mention of Emerald Star, so I suspect the brand is doing a Cheshire Cat.

I was glad to find that Messrs Le Boat have found Google Translate useful. At least, I assume that’s how they produced this paragraph under their “Useful info” tab:

Useful Info for the Ireland

The Irish coast rises tallish from the sea, and yet the terrain drops farther inland, creating a sort of cup where the water gathers. One fifth of the water drains inward to the Shannon River, Ireland’s largest at 360 kilometres (224 miles). The fall on the navigable middle section of the river is slight at only 9 metres (29 feet), which means the water moves slowly. A Shannon River map also reveals the large number of lakes in the Shannon system, a real plus for canal boat cruising!

Feel the irresistible lure of the Shannon-Erne

The Shannon River gives Ireland’s central reaches their character. It’s an obvious feature if you study a Shannon River map. At a glance, it’s clear that the waters influence the land. The fishing is superb and golf is extremely popular! The towpath is level, so you’re in cycling heaven! […]

You learn something every day: I never knew that the Shannon had a towpath. I wonder where it is.

But that’s not the only puzzle. Messrs Le Boat list some suggested cruises, eg:

The golf course calls! The fishing itch must be scratched! Castles loom tall! Feel the warm embrace of Celtic charm!

Who writes this rubbish? But this is the puzzling one:

Travelling in the thousand lakes area takes you from the Lake Niegocin to the Lake Sztynorckie, with plenty to see on the way!

Well, I admit I don’t know the north Shannon as well as I do Lough Derg [“Lough Derg, an angler’s paradise, casts an Irish spell of contentment to keep you fishing and having too much fun!”], but I can’t find either of those lakes on any Shannon or Erne map. Où sont les mille lacs de M. Thibault? Où sont les Niegocins, Antoin? Ils sont dans le jardin avec la plume de ma tante.