My attention was recently drawn to an article [PDF] by Mike Clarke about airholes.

The article is in Clogs and Gansey, the newsletter of the Leeds & Liverpool Canal Society, of which Mike is Founder and President. He is an extraordinarily knowledgeable person and it is well worth while looking around his website: for instance, there’s some material of Irish interest here, a list of publications here and material about the Leeds & Liverpool Canal here including a really excellent document about locks [PDF].

But back to the airholes.

Not being an engineer, or at all technically competent, I’m always reluctant to try explaining these mysteries, so I’ll welcome corrective Comments from any more technically-minded folk.

If the water level on the upstream side of a lock gate is higher than that on the lower, the gate will be difficult to open. If the gate is the tail gate [bottom or lower gate] of a lock, you can raise a rack [paddle] and allow water to flow from the upstream side, which is the chamber of the lock, to the downstream side, thus making a level and allowing the gate to be opened easily.

If the gate is the breast gate [head or upper gate] of a lock, the same applies: you can lift a rack [paddle] in the upper gate, allowing the excess water to flow into the lock chamber.

However, the relationship between the heights of the two gates (or pairs of gates) then becomes important: if the breast gates are higher than the tail gates, the water level in the lock chamber will not be able to reach the height of the water above the lock (at least until you’ve drained down the entire level [pound] back to the next lock upstream).

But for efficient operation, you want to reduce the amount of adjustment that has to be done after the boat reaches the lock but before it can enter the lock chamber. You want a system that is, as far as possible, automatically self-adjusting. That means, in particular, one that ensures that the level of water above the lock is not too high.

On many English canals, that is done by using byewashes.

Byewash on the Huddersfield Narrow Canal (E) at Marsden

As far as I know, though, few Irish canal locks have them, and I have heard British boaters comment on their absence. If memory serves, the canal (Leitrim) end of the Shannon–Erne Waterway does, but I have no suitable photo. I should confess that I have no idea what proportion of Irish and English canal locks are so equipped; I will be glad if anyone who can supply, or point to, the information will leave a Comment below.

Mike Clarke’s PDF article, to which I pointed at the top of this page, provides a possible explanation for the absence of byewashes on Irish canals. He says that airholes were used instead on canals “built or influenced” by William Jessop. Jessop worked on the Grand Canal as assistant to John Smeaton from 1773 and was consultant engineer to the Grand Canal Company until 1802 [Ruth Delany The Grand Canal of Ireland David & Charles, Newton Abbot 1973].

Mike Clarke also says that Jessop trained John Killaly: Killaly joined the Grand Canal Company in 1794 and became its engineer in 1798 [Delany op cit]; furthermore, his designs were used on the Royal Canal from Coolnahay to the Shannon [Ruth Delany and Ian Bath Ireland’s Royal Canal 1789–2009 The Lilliput Press, Dublin 2010].

If I’ve understood Mike Clarke’s article correctly, the airhole system uses the channel for the ground paddle [land rack] sluice instead of building a separate byewash channel. From his photograph, I gather that there is a separate letterbox-like slot in the recess for the rack mechanism: I presume that excess water flows in through the slot, falls to the level of the sluice or channel from there to the lock chamber and thus flows into the chamber. If the tail [lower] gates are left open, or with one rack [paddle] lifted, the water can then flow out into the lower level.

Is my understanding correct?

What proportion of locks on each Irish waterway are equipped with airholes?

Are they still maintained and used? 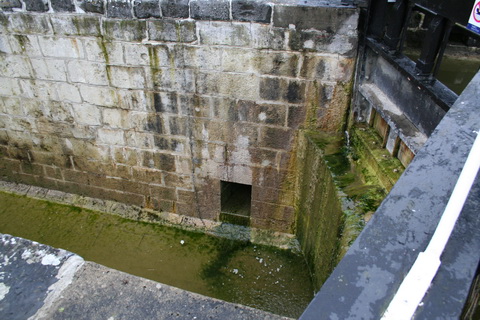 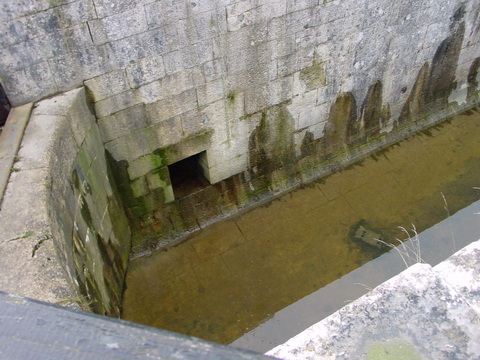 The next three photos were taken at Coolnahay, on the Royal Canal, during the period of very low water levels in 2012.

Letterbox-like slot at Lock 26, Coolnahay, Royal Canal. I must look for similar features on Grand Canal locks and photograph them (if they exist) 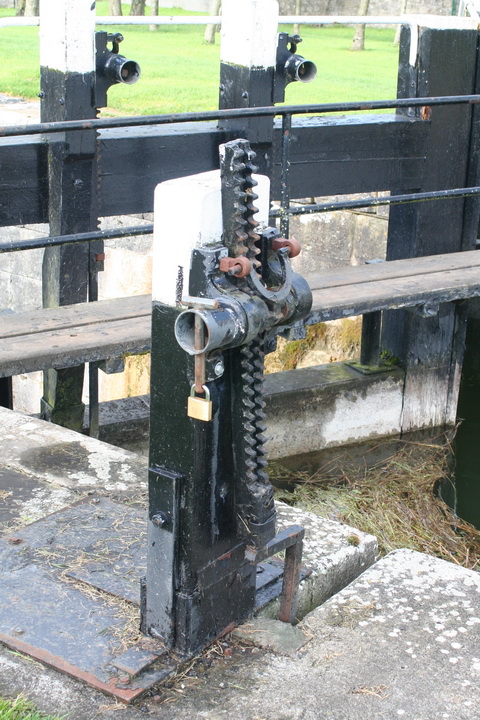 Land rack mechanism locked slightly open: the slots were well above the water level at the time

It is of course entirely possible that all of this is so obvious that everybody else already knows all about it, but that I just didn’t understand what I was looking at. I read WI’s Heritage Survey of the Royal Canal [PDF], but it didn’t say anything about this sort of thing: or at least if it did I didn’t spot it. The report uses some non-standard terminology [eg “head gates”] so I may have missed its identification of the canal’s water-management features.

If, Gentle Reader, you know of the existence of papers or other published materials on these arcana, do please leave a Comment and, if possible, relevant links to online sources. It seems to me that there is a shortage of information about these technical matters as they apply to Irish waterways; it would also be nice if we were able to say which technologies were applied when to which waterways. I do not know whether, for example, we can assume that the lock gate designs in use today were always used on all Irish waterways.