I see in the blatts — well, the Sunday Business Post, actually, although I do realise that other newspapers are read in the servants’ hall — that the Twelfth Lock Hotel at Blanchardstown, on the Royal Canal, is to be sold by public tender on 1 March 2012. No estate agent — the only contact details are for a solicitor and a FRICS FRICI, which means a surveyor (I think) — so there is nothing on tinterweb.

The hotel is described thus:

Older folk will note the link to this story.

I stayed in the hotel once; it was fine. I’ve been in the bar a few times, and noted three things. The first was a range of beers that was wider and better than most Irish pubs serve (which is admittedly not saying much). The second was that the bar food was tasty and served in generous quantities. The third was the mural (I’ve cropped the lower part of the photo to omit the customers) of chaps building the canal.

The hotel is in a wonderful location, off a quiet road but close to the railway, the M50 motorway and the Wonderful O of the junction with the Royal Canal crossing in the middle.

Boat descending the twelfth lock (a double). The building on the left at the top is the hotel

Across the canal are flats is where the Blanchardstown Mills stood; the site has unsuspected depths. 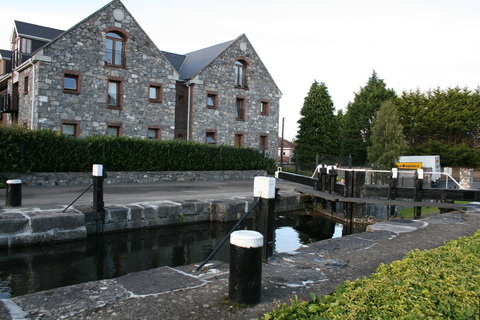 I don’t really know the status of the “marina”. It seems to consist of a short run of pontoons with gated access. I think it’s a good idea to have such an arrangement; perhaps something similar could be done on the Grand Canal.

But who runs it and controls the allocation of spaces? I don’t know: although the gateway seems to have Waterways Ireland branding, there is also this sign:

Its website doesn’t seem to have changed much for several years and the “How goes it” page, showing progress in raising funding, doesn’t seem to work. There is a hire firm too.

It would be nice if the hotel, marina and hire firm were to continue in operation.