On Friday, 25th ult, the Antrim and Tyrone Lough Neagh Steam Ferry Company’s first boat, the Enterprise, was launched from Port Armagh, on the Tyrone side of Lough Neagh. She is a most beautiful boat, and does great credit to Mr Hiram Shaw, of this town, for his exertions in bringing her out in such fine style. Her engines were built by M’Adam, Currell, and Company, of Belfast.

[Notes: I do not know where Port Armagh is or was. The Enterprise is not mentioned in D B McNeill Irish Passenger Steamship Services Volume 1: North of Ireland Augustus M Kelley Publishers, New York 1969]

The heading shows I’m trying hard to find a waterways link for this ….

If you’re anywhere near Belfast, visit Patterson’s Spade Mill near Templepatrick on the Antrim Road. The IHAI visited it after the April 2012 AGM and it was quite fascinating. Did you know that there were once 171 different types of spades in use in Ireland, catering for different uses and different types of soils?

Some of the many types of old spades on display

The mill is powered by water, using a turbine, and it’s the last water-driven spade mill in These Islands: 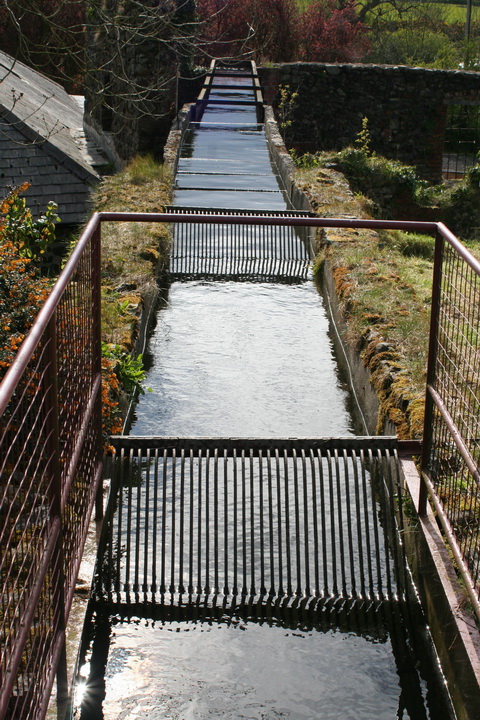 The channel taking water from the stream to the turbine. Part of the channel runs in a trough made by Portadown Foundry

The turbine turns a shaft, which turns these wheels, and the belts power many of the machines in the mill

The water-powered trip-hammer towards the back

The mill (which is original, not a reconstruction) is absolutely packed with machines and must have been a hellish place to work when in full production, with the heat from the furnace, the noise from the trip-hammer and several workers producing spades at the same time. The spade-maker above is one of the last six in Europe and really knows what he’s talking about: not just the process but the uses to which spades were put. The other guide, who took us around the other parts of the site, was also knowledgeable and helpful.