Marty Whelan, a youthful disk-jockey chap with an insignificant amount of facial hair, presents a morning programme on the wireless. One day last week, discussing traffic problems with a chap from AA Roadwatch, he considered the origin of the name of L’Estrange Bridge, whose location neither he nor his collocutor knew. 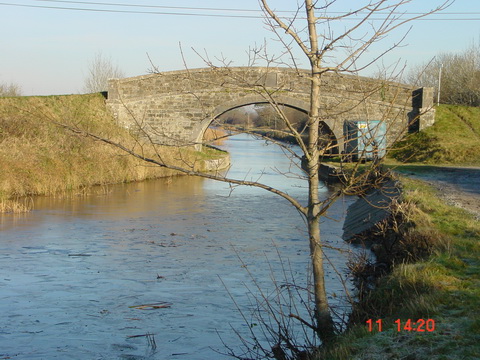 It had been mentioned on this site as the location of a fatal motoring accident in December 2011 and it is, of course, a useful stopping place for those who, driving to Athlone, like to stop to consume the coffee (and any comestibles) they may have purchased in the award-winning Spar shop in Cloghan.

I emailed Mr Whelan, with a link to the location on the OSI map. 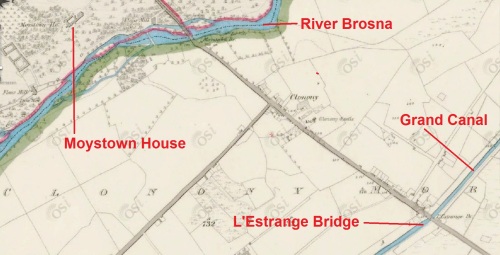 I speculated that, as the nearby Moystown House was owned by the l’Estrange family (as was Huntston or Hunstanton, across the road), the Grand Canal Company might have had to buy land from them and, with the aim of keeping the cost down, have agreed to name the bridge after the landowner (a tactic that the National Roads Authority might adopt).

I should make it clear that I have not researched the land purchases of the Grand Canal Company in the area, so this should not be taken as definitive. I note, from Fred Hamond’s Bridges of Offaly County: an industrial heritage review (for Offaly County Council, November 2005), that the date on the bridge is 1800, although the canal was not opened until 1804; as Fred says:

Most [bridges] were built before their respective stretches of canal opened […].

The principal artificial features are the mutually adjacent demesnes of Moystown and Hunstanton, the residences of the Messrs L’Estrange, situated on the Brosna. “Though Moystown,” remarks Mr Fraser, “has not extensively diversified park scenery to boast of, and is environed by deep brown bog, there is, in the style of the house, in the arrangement of the plantations, and in the beautiful evergreen oaks and other ornamental trees which adorn the lawn, a character which carries us back to the gentlemen’s seats of the olden times. This demesne is watered by the Brosna, which pays its ample tribute to the Shannon at thetermination of the grounds, and where also the Grand Canal crosses the river in its progress to Ballinasloe.”

A quick search suggests that the l’Estranges did occupy land there in 1800, but I cannot claim to have carried out a thorough investigation.

What was of more interest to me was that the Parliamentary Gazetteer extract was from an item headed Tessauran, Tiseran or Kilcally: 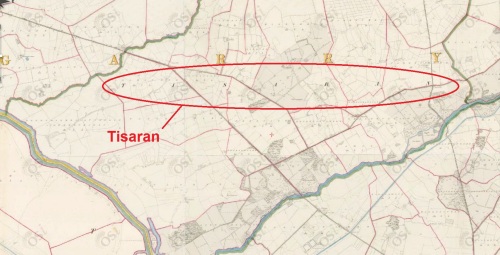 TESSAURAN, TISERAN, or KILCALLY, a parish in the barony of Garrycastle, 2¼ miles north-west by west of Cloghan, King’s co., Leinster. Length, south-westward, 3¾ miles; extreme breadth, 2½; area, 7,316 acres, 2 roods, 12 perches, — of which 106 acres, 3 roods, 38 perches are in the river Shannon. Pop., in 1831, 2,032; in 1841, 2,029. Houses 346. The north-western boundary is traced by the Blackwater; the south-western boundary, by the Shannon; and the south-eastern boundary, by the Brosna. All the northern district, part of the eastern, and most of that along the Blackwater, are bog; much of that along the Shannon is lowland meadow; and most of the remainder is dry limestone land, pleasant in appearance, and possessing a considerable aggregate of embellishment.

Some time ago, I asked here about Tessauren Ferry, but had no response. I found the term in F E Prothero and W A Clark eds Cruising Club Manual: A New Oarsman’s Guide to the Rivers and Canals of Great Britain and Ireland George Philip & Son, London 1896. His entry for the Grand Canal included this at 79¼ miles from Dublin:

Entrance into the Shannon at Tessauren Ferry.

I have not seen the term used anywhere else. The ferry is of course that provided by the Shannon Commissioners to enable horse-drawn boats to cross the Shannon to the Ballinasloe Line of the Grand Canal. It would be nice to find other instances of the use of Prothero’s term.

Tessauran, Tisaran, Tiseran, Tessauren (and perhaps there are other variants) is the name of the parish north-east of the junction between the Brosna and the Shannon. It is odd that the ferry’s eastern departure point was actually outside the parish, because the Brosna was the boundary and the ferry started from the south side of the canal and the Brosna. 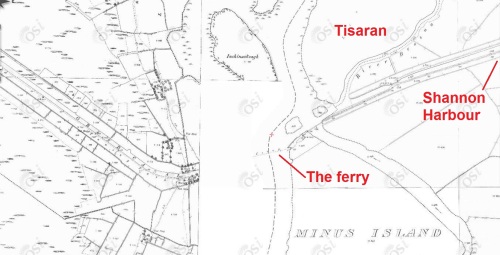 Tisaran parish and the ferry

The other link I had not made was that between Tessauren and St Saran, whose well I photographed some years ago, which means that I was on the grounds of Moystown House. 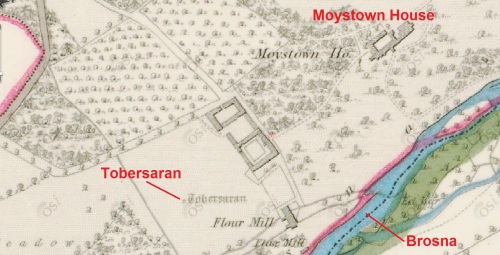 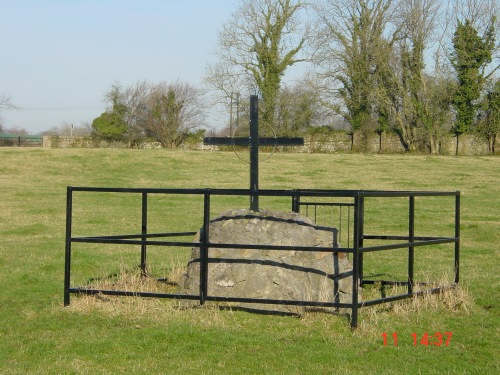 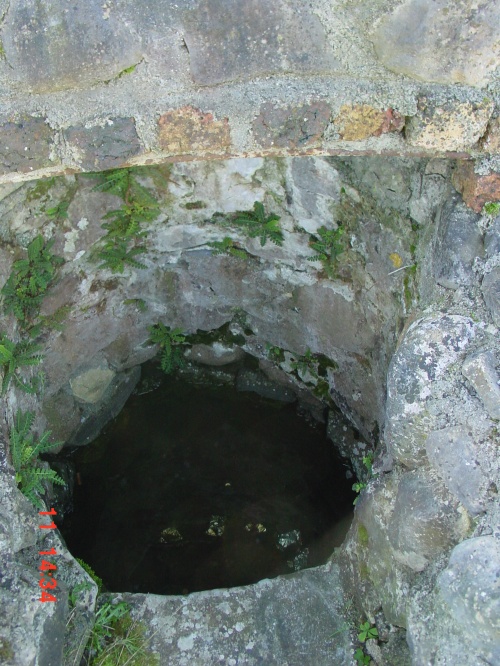 Looking into the well

So one mystery solved, as an accidental result of a remark on the wireless, but more information about the use of the term Tessauren Ferry would be welcome.