I thought it would be interesting to ask the British Newspaper Archive what people were reading about in newspapers published in Dublin between 1 January 1845 and 31 December 1850. The BNA has scans of two Dublin newspapers for that period, the Freeman’s Journal and the Dublin Evening Mail. I used the archive to search for four different words in those newspapers in that period; I then counted the numbers of results.

On the first round, I included ads and family notices. 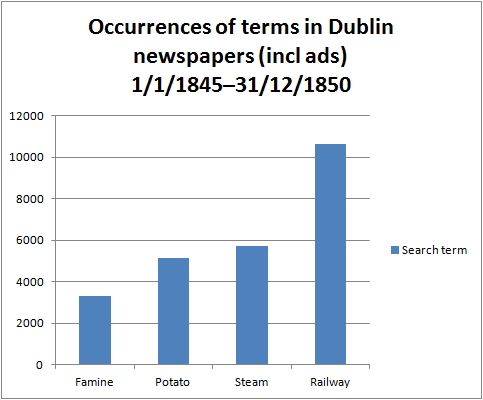 I guessed that the numbers for steam and railway might be exaggerated by their inclusion in ads so, on the second round, I excluded both ads and family notices. The result was as expected.

I then asked Google’s Ngram machine to count the numbers of occurrences of four pairs of words between 1845 and 1850. I asked it to do a case-insentitive search, but it can’t do that for “compositions” (combinations of words), so it counted:

Here is what it came up with, but whence I know not, other than that it searched the corpus English. The embedding process doesn’t seem to be working, so I’ve left the code here but also cut and pasted the output.

I suspect that, in recent times, the amount written about steam and railways of the period 1845–1850 in Ireland has been rather less than that about potatoes and the famine.