In October 2011 I was in Liverpool, where I took a couple of photos of DUKWs taking trippers around the still waters of the no-longer-used docks.

DUKW in the Salthouse Dock, Liverpool 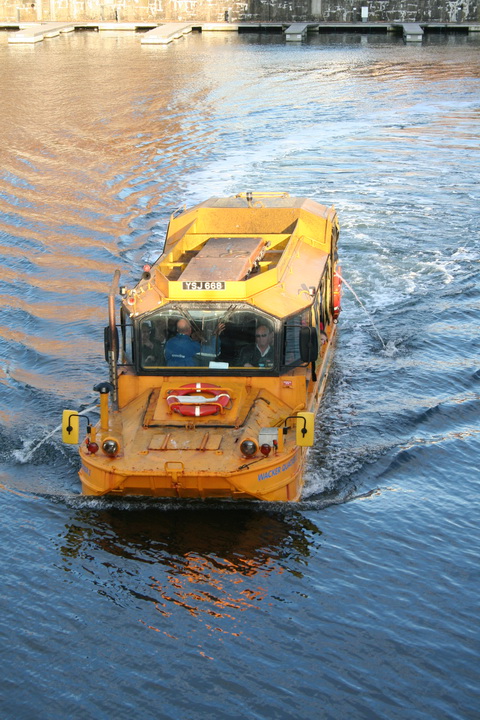 DUKWing under the bridge into the Albert Dock, Liverpool

In Dublin, Viking Splash offers similar tours, with the regrettable addition of horned helmets, as not worn by Vikings. The Dublin operation seems to have added two other items that were not discernible on the Liverpool DUKW. 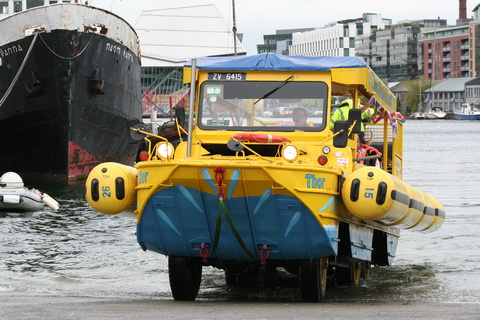 Extra buoyancy on the Dublin DUKWs

First, before they enter the water at Grand Canal Dock, Ringsend, the DUKWs are fitted with extra buoyancy in cylinders that slide into racks along their sides. I saw the VikingSplash crew removing the cylinders from the yellow DUKW; it took only a couple of minutes, and I presume that it didn’t take much longer to put the cylinders on. 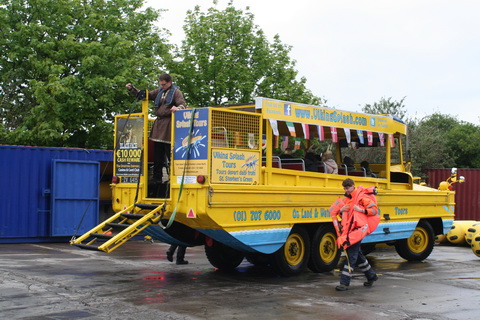 Buoyancy aids being collected after the trip around the dock

Second, the Dublin passengers are issued with buoyancy aids before they take to the water. I can’t see any buoyancy aids on the Liverpool passengers, although it’s possible that they are out of camera shot.

Sometimes we complain about extra health and safety (which often means insurance) requirements. Then something like this happens: a yellow DUKW sank yesterday in Liverpool — for the second time this year. I don’t know whether the precautions taken in Dublin would have averted the accident or enhanced the safety of the passengers but it does suggest that the Maritime Safety Directorate bods in Dublin do have a point.

Addendum: the speaker on this clip says that passengers began putting on buoyancy aids, which suggests that aids were issued but not worn. Given how quickly the vessel sank, and how constricted the space inside is, it seems to me that passengers should wear their buoyancy aids throughout the waterborne trip.

Later still: a BBC story saying that a tyre may have caused the problem, the Liverpool mayor’s opinion (and some good photos) and the firm going into administration.

Her Late Majesty Victoria, by the grace of god of the United Kingdom of Great Britain and Ireland Queen, had at least two locks named after her on this island: one at Meelick on the Shannon and the other at Upper Fathom on the Newry Ship Canal. This page gives a brief account of the canal’s history; it has links at the bottom to six pages (made up almost entirely of photographs) on aspects of the lock and its operation. Several of those aspects are not clear to me and I would welcome enlightenment about both the former manual operations and the current hydraulic operations.