According to a story in the dead-tree version of today’s Sunday Business Post [and regarded as Premium Content, and thus gated, in the online version],

A €22 million bridge is needed to allow for the construction of 2000 homes on the derelict Irish Glass Bottle site [in Ringsend, Dublin]. […] The necessary bridge over the River Dodder needed to make the site viable will have a lifting mechanism to enable ship traffic into the Grand Canal basin and the Liffey.

The Department of the Environment etc thinks €22 million is too much and would make the houses too dear; Green Party leader Eamon Ryan TD thinks the state should pay for it, presumably to facilitate all the motorists who might want to live on the site.

The site is here. There’s an aerial photo here. Here’s the Google version.

I can’t see why a lifting bridge over the Dodder is needed, unless the plan is to run traffic along a new route from Britain Quay to York Road, which would simply jam up the city centre. Can anyone explain what this is about?

One of North Dublin’s less-well-known treasures, this is Blessington Street Basin, off the (former) Broadstone Line of the Royal Canal. Thanks to Michael Geraghty for the photo, taken in November 2015.

Some queries about the Ballykelly or Broharris Canal. 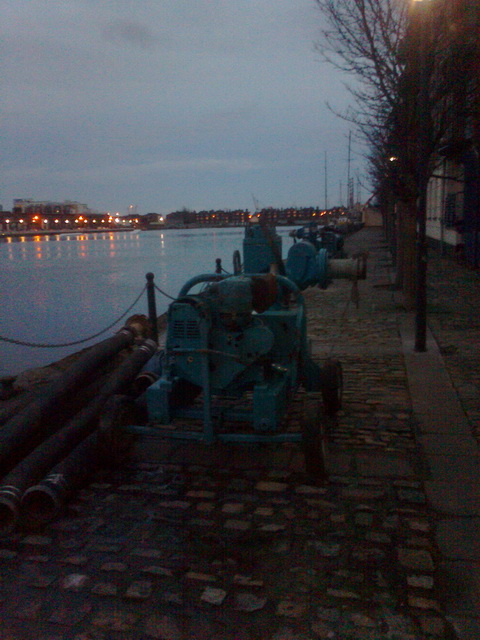 Pumps on the quay

Ready for the slings

Thanks to Paul Quinn for the information and photos.

Her Late Majesty Victoria, by the grace of god of the United Kingdom of Great Britain and Ireland Queen, had at least two locks named after her on this island: one at Meelick on the Shannon and the other at Upper Fathom on the Newry Ship Canal. This page gives a brief account of the canal’s history; it has links at the bottom to six pages (made up almost entirely of photographs) on aspects of the lock and its operation. Several of those aspects are not clear to me and I would welcome enlightenment about both the former manual operations and the current hydraulic operations.

At a Meeting of the Company of Undertakers of the Grand Canal, duly convened by public Advertisement, and held at the Company’s House in Dublin, on Monday, the 6th day of April, 1840,

WILLIAM MURPHY, Esq., in the chair,

Resolved — That the Court of Directors of this Company be authorised, if they shall see fit, to call the attention of the Government, of the Chamber of Commerce, of the Ballast Corporation, of the several Steam Companies, and of Capitalists generally, to the important advantages which the Grand Canal Company’s Floating and Graving Docks at Ringsend offer to all parties connected with the Shipping interests of the Port of Dublin, and to apprize them that this Company will at all times be ready to entertain any well considered proposition for increasing the general usefulness of these Docks, on the fairest and most liberal terms as regards the Public. Under the firm persuasion that by whatever well-arranged proceeding this important portion of the Company’s property can be best made available in increasing the Trade and promoting the prosperity of the City of Dublin, it will be rendered the most effectually conducive to the interests of the Company.

By order, JOHN McMULLEN,
Secretary of the Company.

Perhaps Waterways Ireland might follow the example of its predecessors and, rather than getting into bed with the DDDA, might consider some “well considered proposition for increasing the general usefulness of these Docks”.

Tralee Ship Canal, about 2 km long, links the town of Tralee, in County Kerry, to the sea. It might be the most westerly canal in Europe (query Belmullet).

The canal was restored recently, courtesy of the taxpayer, but seems to be little used. It has a sea lock (but no other locks) and a swivel bridge. Here are some photos taken on a very wet and windy day.

The Broadstone Line of the Royal Canal

A new page about a waterway that lost its terminus in 1877, was mostly infilled in 1927 and lost its last section in 1956. But you can still follow the Broadstone Line of the Royal Canal in Dublin. There’s lots of interesting stuff to see, it’s quite scenic — and there are pubs serving good beer nearby.