More folk believe that the Shannon is the great dividing line in Ireland: civilisation and a modern economy to the east, primitive tribalism to the west. Of course that isn’t true — except in one respect: rubbish bins on the lower Shannon.

There, counties Offaly and Tipperary, on the east side, provide rubbish bins for boaters at harbours; on the west side, counties Clare and Galway do not, save for a dog-poo bin at Portumna Castle Harbour.

Waterways Ireland has signs in some places saying that it has a “Leave no trace” policy: that is, I presume, intended to excuse it from providing bins, and paying for rubbish collection, at its own harbours. I guess — I am open to correction on this — that the local authorities on the civilised side of the Shannon are happy to bear the cost of providing for boaters, while those on the wilder side are not. It’s not just boaters, though: the new camper-van park at Portumna Castle Harbour, admirable in so many ways, has no bin service.

Now, having to take your rubbish home after a one-day picnic is not a particularly great problem. Doing so after a full week on a boat or in a camper is rather more difficult, especially if your rubbish includes the dog-poo that you have nobly and civil-spiritedly picked up. [Incidentally, I felt like an idiot in Ballinasloe, picking up a small dog-poo beside a vast pile of steaming horse-shit.]

Those boaters and camper-vanners who have cracked the code — worked out the distribution of bins — can of course hold on to their rubbish until they reach civilisation, but I met several folk (natives and visitors) who hadn’t worked it out. I didn’t meet anyone who thought the absence of bins was a good idea. And most people don’t have space on board their boats or vans for a week’s or two weeks’ worth of rubbish, never mind airtight storage to keep smells in and flies and rodents out.

The western local authorities are free-riding on the ratepayers of the eastern counties, and at some point the easterners may get fed up. A bank holiday weekend produced overflowing bins at Banagher: they were emptied very promptly on the Tuesday morning, so well done Offaly County Council. But I suspect that some of the rubbish should have been disposed of west of the Shannon. At what point will the eastern local authorities cry “enough!”?

Rational economic man, faced with the absence of bins at harbours in Clare and Galway, would adopt a simple solution: if on a boat, put everything into a bag with a large stone and throw it overboard in the middle of the river; if in a camper, sling it into a ditch somewhere. The policy of the western local authorities is designed to encourage littering.

And there’s no point in telling me about Leave No Trace Ireland, which strikes me as yet another Irish solution to an Irish problem:

Leave No Trace is an outdoor ethics programme designed to promote and inspire responsible outdoor recreation through education, research and partnerships.

Who thinks up this rubbish? There are many responsible boat- and camper-users who want to be able to dispose of their rubbish properly during their holidays. We need bins, not propaganda.

I mentioned some time ago that, according to its Business Plan 2015, Waterways Ireland was considering automating Pollboy Lock, on the River Suck to Ballinasloe, in order to save costs. Like other offshoots from the main Shannon Navigation [Killaloe to Lough Key], the Suck is relatively little used.

According to the Connacht Tribune, the automation is to proceed and the lockkeeper is to be reassigned. It seems that some local councillors and “business interests” — who do not, as far as I know, contribute to Waterways Ireland’s income — regret the loss of an ambassador for the town. The keeper, Mr Coyne, was indeed extremely helpful to visiting boaters.

However, he could help only those who arrived at his lock: he could do nothing to attract more boating visitors to the town. That is not in the least a criticism of him, but rather a suggestion that councillors and business interests might perhaps have done, or yet do, more to attract visitors and increase the usage of the splendid harbour in Ballinasloe. Perhaps they might even appoint and pay a town ambassador?

A Sinn Féin councillor quoted in the article seems not to be entirely familliar with the duties of lockkeepers. Furthermore, he does not take account of the fact that the Shannon–Erne Waterway succeeds without lockkeepers — or that it was proposed that the Clones Sheugh [not-the-Ulster-Canal] operate in the same way. Surely a Sinn Féin councillor is not suggesting that, without keepers, the Sheugh might not be the enormous success that his party purports to believe it would be?

PS: the Tribune also has a piece about rubbish at Castle Harbour, Portumna. 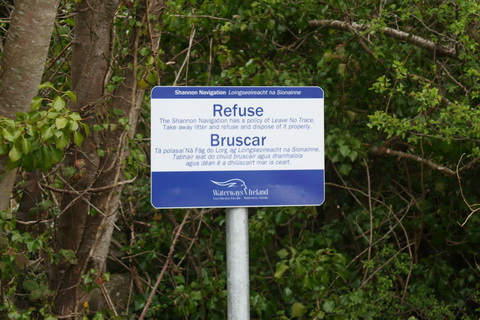 Refuse, it says: The Shannon Navigation has a policy of Leave No Trace. Take away litter and refuse and dispose of it properly.

Unfortunately Ryanair limits the amount of stuff a visiting tourist can carry home on an aeroplane.