I am grateful to Waterways Ireland for letting me have the Shannon traffic figures for June 2014. All the usual caveats apply:

Total traffic is down again, but only slightly. The decline does seem to be levelling off and a continuation of the relatively good weather could increase usage.

Private-boat traffic for the first six months of each year

Private traffic is down slightly on last year, but it has been pretty much the same for three years. I had thought that the good weather might have caused something of an increase, but on the other hand my own impression of Lough Derg traffic (not reflected in the passage figures) is that it has been fairly light.

Hire-boat traffic for the first six months of each year

For hire-boat traffic, there is no sign of an upturn, although the drop on last year’s figures is not very large.

Changes since 2003: private and hired boats

That table amalgamates the two before it, but shows the figures as percentages of the 2003 figures. For private boats, the Celtic Tiger (nach maireann) caused an increase; that effect has worn off and usage has not changed much since about 2011. For hired boats, the decline began long before the Celtic Tiger idiocy.

Hired boats were once the major users; private boats have almost caught up.

How to save money

I don’t know how much the various locks cost to run, so I can’t work out any measure of value for money, but the sea lock in Limerick and the Lough Allen Canal must surely be candidates for the chop.

The current (November 2013) issue of the British magazine Waterways World (available online only to subscribers) has an interview with Dawn Livingstone, new CEO of Waterways Ireland. There was a question about visitor numbers:

How are boating visitor numbers holding up in the recession?

The type of boating is changing — more sports boats for example, and numbers, after an initial decline, have held steady in the cruiser hire and private boat fleets. But more customers are investing in active recreation — canoeing, sailing, rowing, and these clubs and holiday types are growing rapidly.

My sense of the types of boating is the same, but I do not know of any source of reliable data. I think it would be useful if Waterways Ireland were (somehow) to collect and then to publish data on these activities and their economic costs and benefits.

But I was amused by the statement that …

[…] numbers, after an initial decline, have held steady in the cruiser hire and private boat fleets.

I’m not sure what useful data there are for the Lower Bann, Shannon–Erne Waterway, Grand, Royal and Barrow, though perhaps enhanced enforcement of the regulations will improve the data for the last three of those waterways. For the Shannon and Erne, the numbers in the fleets are, I presume, derived from the numbers of registered vessels, but there is no annual re-registration and I am not clear how many boats that are removed from the navigation are removed from the registers.

The other, indirect, measure, which applies only to the Shannon, is of passages through locks and moveable bridges. And, for hire boats, the “initial decline” has been 60% since 2003. If the numbers are now holding steady, it is at a very much lower level than ten years ago.

I now have the figures for two more months, August and September, kindly supplied by Waterways Ireland, who are not to blame for my delay in getting the information up here. 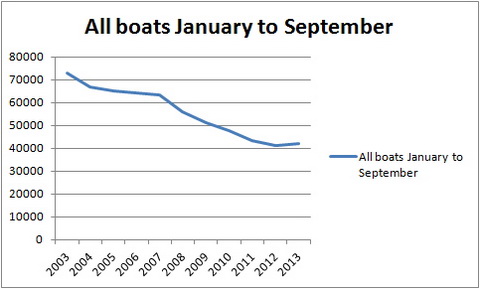 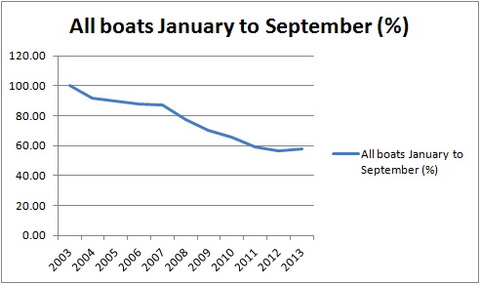 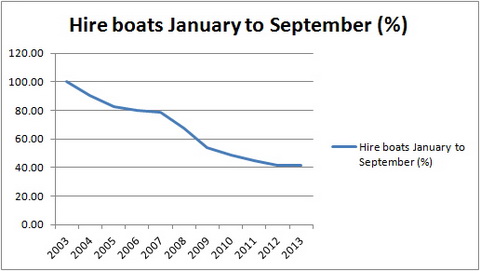 Hire boat numbers are down by only a tiny amount 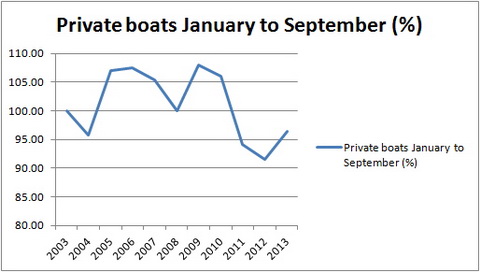 Private boat numbers are up 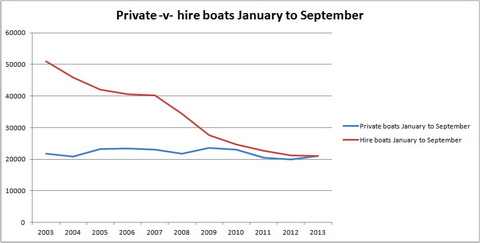 Private boat numbers are ahead of hire in the three main summer holiday months of June, July and August and, although the numbers are tiny, in the winter months as well; hirers are ahead in spring and autumn.