At the Grand Canal Company’s half-yearly meeting on 22 February 1890, a Mr Geoghegan

[…] said he had heard from a gentleman interested in the trade between Dublin and Limerick that it often took six days for Guinness’s porter to be carried by canal from the former of these cities to the latter. The cause of this he believed was the necessity for trans-shipment at Shannon Harbour.

As to the delays at Shannon Harbour there had been some, but he believed these had been caused by floods and storms in the river.[1]

The company had commissioned Mr E Lloyd, engineer and general manager to the Warwick and Birmingham Canal Company, to inspect the Grand Canal and to advise the board. It was estimated that his survey would cost between £100 and £120. The chairman accepted that there were

[…] many matters […] which demanded immediate steps, and these entailed considerable outlay. It has been evidenced that before the property of the company could be stated to be in a thoroughly satisfactory condition some further exceptional outlay would be advisable from time to time.[2]

At the next half-yearly meeting, held on 23 August 1890, the chairman said that the company was considering investing in a more rapid transhipment system “from our barges to the Shannon steamers” at Shannon Harbour, in accordance with Mr Lloyd’s suggestion.[3] 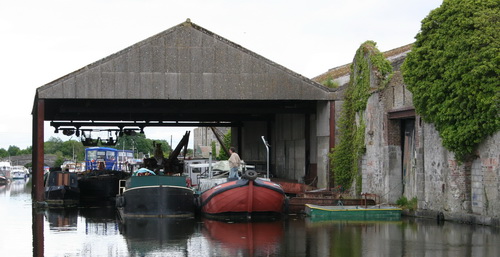 The transhipment shed at Shannon Harbour in June 2008, before its canopy was removed

I do not know whether the transhipment shed at Shannon harbour, and the gantry mechanism on which goods could be loaded and unloaded under cover, was built on Mr Lloyd’s suggestion. It would be interesting to know more of the building’s history.

Some time ago I wrote three pages about the Rockville Navigation, which is linked to Grange on the Carnadoe Waters in Co Roscommon.

I recently revisited the area. I was horrified, first, to find that the bridge — built in June 1765 — has been severely damaged, with large chunks of masonry in the cut beneath and with a crude wooden repair. How many bridges of that age are there in Co Roscommon? How many that are associated with one of the oldest navigations in the country? Please, someone, restore the bridge!

Damage to the bridge

Anyway, the more pleasant part of the day was the four hours that we spend descending, by dinghy and kayak, from the bridge to Grange. The route took us through artificial cuts, small lakes and sections of river, with very clear water and an extraordinary abundance of vegetation. This route would have been easily navigated by large wooden cots or similar boats, and it should be developed today as a canoe-and-small-boat trail. Even with very low water levels, we had no real problems, although someone has to end up with wet feet …. Here is an account of the trip.

Wading in the water